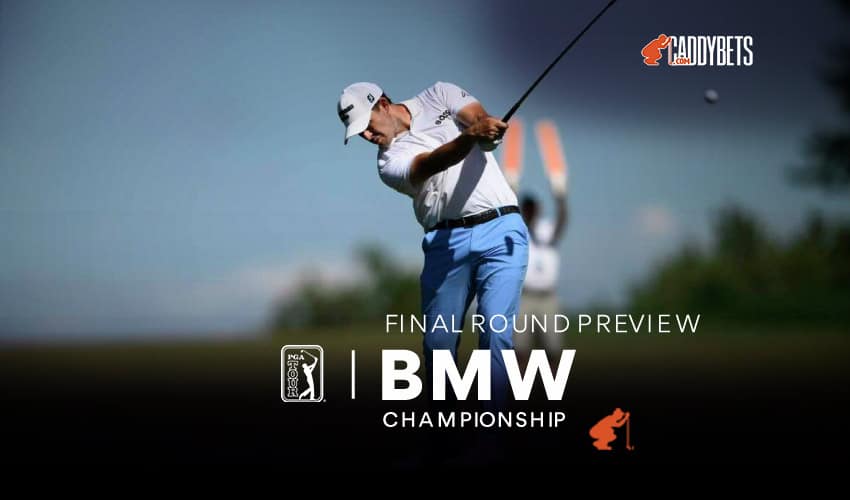 Last year’s FedEx Cup champion Patrick Cantlay put himself in the perfect position to win back-to-back BMW Championships after taking the lead in this year’s tournament. Here’s all you need to know for the BMW Championship Final Round.

Cantlay flew up the leaderboard, picking up four strokes in three consecutive holes which included an eagle, where the American holed out from the fairway.

Due to his unassuming nature, Cantlay can often fly under the radar when it comes to the game’s biggest events, but he is a class player and he showcased all of his abilities here.

Cantlay’s Ryder Cup partner, Xander Schaufelle is hot on his tail and will start today’s final round just one stroke behind. Schaufelle produced one of the rounds of the day, holing several key par putts to keep himself firmly in contention.

Scott Stallings will start the day level with Schaufelle and is looking to land the biggest title of his career. Stallings turned into a birdie machine and despite lacking the pedigree and experience of some of his rivals, the American shouldn’t be overlooked.

Scottie Scheffler and second-round leader Adam Scott will start the day two behind Cantlay and both will still have high hopes of victory.

Young guns Collin Morikawa and Aaron Wise will start the day three strokes behind and are still firmly in the mix. Morikawa is yet to win this year and it would be a statement if his first win of the season were to come here.

There was disappointment for the pair of Jordan Spieth and Rory McIlroy. Spieth shot a +3, 74 and will start the day eight strokes behind Cantlay, whilst McIlroy will start five behind following a -1, 70. Both will need to produce something special if they are to come out on top.

Patrick Cantlay is well priced to win his eighth PGA title. Cantlay has had a great year, winning once and recording numerous top ten finishes. As the reigning FedEx Cup champion, Cantlay knows how to win these events and can clearly handle the pressure. He is the man to best today.

Xander Schaufelle has had a great year, winning four titles in the past twelve months. Clearly one of the most talented ball strikers on Tour, Schaufelle will be disappointed that he hasn’t been able to make his major breakthrough, but he could announce himself as one of the best in the world with a victory today.

World number one Scottie Scheffler rounds out the top three in the betting. Scheffler was always bound to struggle a little, following his lightning start to the year. Scheffler is still striking the ball well and has scored seventeen birdies across his first three rounds. If he can cut out the bogeys, Scheffler has a great chance of victory.

Beyond the top three, the betting is super tight. Collin Morikawa looks to have rediscovered his best swing and will be desperate to win his first title of the year. If he can hit his iron shots like we know he can at +1000 he could be a player at an attractive price.

Join Us to receive more BMW Championship Final Round Highlights & News! Make sure to stay tuned for the latest Golf Vegas Odds,