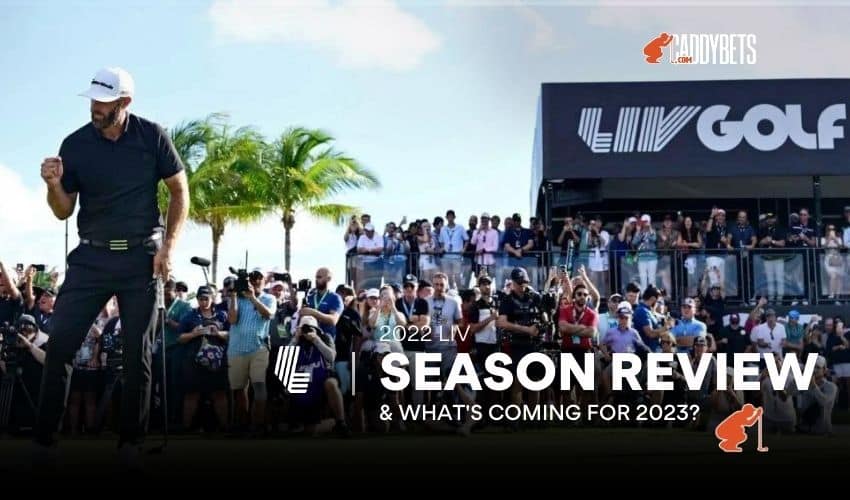 In what will be remembered as a landmark year for the sport of golf, 2022 saw the emergence of a new golf league that attracted some of the world’s best golfers and biggest stars with perks like huge signing bonuses, increased prize money on the course, a reduced schedule, and a new team concept. Here our 2022 LIV Season Recap

LIV Golf, through outspoken CEO Greg Norman and financing by the Public Investment Fund of Saudi Arabia, the new league spent the first part of the year acquiring players and then hosted an eight-event schedule from June to October.

The circuit will expand to 14 events in 2023 and likely add a few more golfers from the PGA Tour before things get started in the new year.

Norman acquired the services of several big-name golfers, including Phil Mickelson, Bryson DeChambeau, Brooks Koepka, and Sergio Garcia. While these golfers may have their best days behind them, LIV snatched two recent major winners and two golfers in their prime in Dustin Johnson and Cameron Smith.

Johnson, the 2020 Masters and FedEx Cup champion, left the PGA Tour for LIV and had the most lucrative stretch of his career, winning $35 million across just eight tournaments in becoming the circuit’s first individual and team champion.

Johnson won one of seven individual LIV tournaments (in Boston) and snagged an $18 million bonus for the championship. The final event of the year was the LIV Team Championship in Miami, and his 4 Aces team (comprising of Johnson as team captain, Patrick Reed, Talor Gooch, and Pat Perez) won that championship as well. Of the eight events that featured a team component, the 4 Aces won five of them.

Cameron Smith, fresh off a 2022 where he won The Players Championship and the Open Championship at St. Andrews, joined LIV Golf in time for the series’ fourth event, and he claimed victory in Chicago in his second tournament with the new series.

Other winners include South Africans Charl Schwartzel and Branden Grace, Henrick Stenson, Brooks Koepka, and—the unlikeliest winner—Eugenio Lopez-Chacarra. The 22-year-old was the No. 2 amateur in the world at Oklahoma University a year ago, but after signing with LIV over the summer, he took home a $4 million payday in one of his first handful of tournaments as a pro.

Another name who broke out despite not winning an individual tournament was Peter Uihlein. The 33-year-old had been on the tour since 2011 and won a total of around $4 million in 126 tournaments. In eight events with LIV, two of which saw him finish in the runner-up spot, Uihlein took home more than $12 million. And next year, he’s replacing Gooch on Johnson’s 4 Aces team.

There are some things we know about LIV Golf in 2023 and many things that we do not.

So far, seven of the 14 events are set, and none of the locations announced are at courses that hosted an event in 2022. Expect some (like Jeddah and Doral/Miami) to return in 2023.

Of the courses announced, four have hosted PGA Tour events in its history.

The 2023 LIV season will open at El Camaleon Golf Course at Mayakoba in Mexico from Feb. 24-26. Mayakoba played host to an annual PGA Tour event in the fall, most recently won by Tony Finau this past November.

The next announced event is at The Gallery Golf Club in Tucson, Arizona. It hosted the WGC-Match Play event in 2007 and ’08. LIV golfer Stenson won the first event while the second was won by Tiger Woods.

The tour will head to Adelaide in Australia—the home of CEO Norman and top golfer Smith—in April, followed by a trip to Singapore the very next week. After a week off, the circuit returns to the United States at Cedar Ridge Country Club in Tulsa, Oklahoma from May 12-14.

In June, it’s off to Spain at historic Real Club Valderrama, which has hosted a Ryder Cup in the past and an annual fall stop on the DP World Tour. The final event announced so far is from Aug. 4-6 at the Greenbrier Resort in West Virginia. This historic resort hosted a PGA Tour event from 2010-19 with the final one being won by current LIV Golf player Joaquin Niemann.

Firstly, will the series’ golfers earn points from the Official World Golf Rankings, which will help them qualify to play in majors? Players are currently banned from PGA Tour events but can currently compete on the DP World Tour under a temporary ruling by a judge.

The four majors, however, can set the criteria for their own events. Players like Smith and Johnson are already in thanks to being a past winner in recent years, but others who would’ve previously qualified may not make it if they are selected based on their standing in the OWGR.

Secondly, LIV is reportedly seeking a television partner in the U.S. to pay rights fees and broadcast the tournaments. This past year, the events were shown for free on YouTube in places where LIV didn’t have a broadcast deal in place.

Going into 2023, there have been rumors that LIV is planning to buy time to air some tournaments on cable channel FS1, but these reports have yet to be confirmed. All Norman has said so far is that the group is in talks with the major television networks in the U.S.

What Can You Bet On?

While the format of the 2023 LIV season has not yet been announced, you can bet on which current PGA Tour player will be the next to join the series. Norman has said that he’s looking to add about seven players prior to the 2023 season. The two favorites are Australian Adam Scott (-3300) and Hideki Matsuyama (-2000) of Japan.

Follow us on Social Media for more 2022 LIV Season updates!