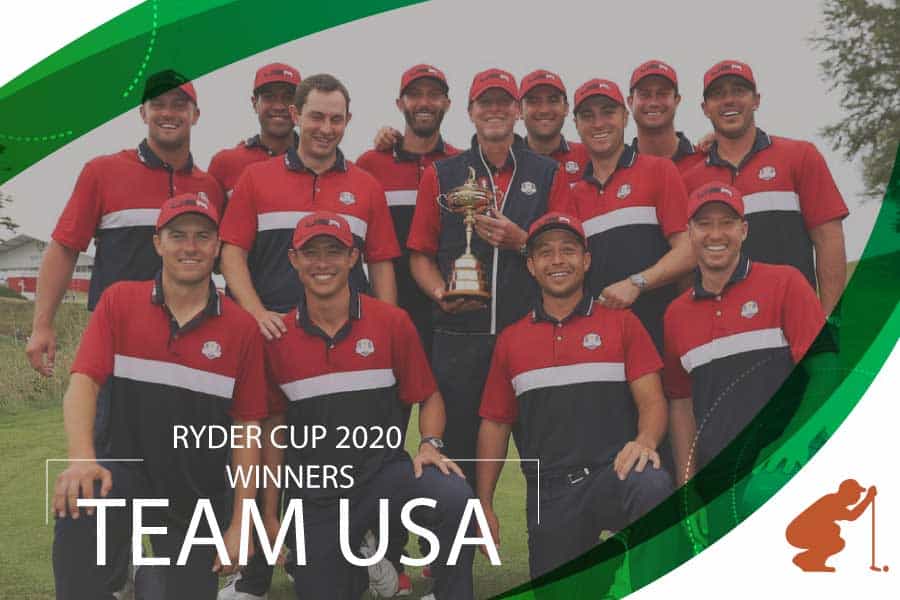 Going into the 2021 Ryder Cup Recap, most people figured that United States captain Steve Stricker’s decision to have half of his team be Ryder Cup rookies (six of 12) would either pay off big or backfire in a big way against a more experienced Europe team that was used to winning this tournament much more often than not.

Turns out that the fresh blood was just what the U.S. team needed. Here we have the 2021 Ryder Cup Recap.

The Americans dominated team Europe at Whistling Straits in Wisconsin in all three days of competition, winning 19-9 for the largest margin of victory in the modern era, when the rest of Europe joined what was the Great Britain team in 1979. It’s also the most points scored by a team since the U.S. won 21-11 in 1975.

After dominating the event wire-to-wire—all 12 American golfers won at least one match in foursome and fourball play on Friday and Saturday and went 7-3-2 in singles matches on Sunday—team captain Stricker was moved to tears over his team’s performance.

“This is the greatest team of all time right here. This is an new era for USA golf,” beamed Stricker. “I never won a major; this is my major right here.”

The American team, -220 favorites going in, led 6-2 after day 1 and 11-5 going into the 12 singles matches on Sunday. The largest deficit ever erased on a final day was four points, but the U.S. team didn’t let up in extending their lead.

Dustin Johnson, who was dominant in 2020 but hadn’t been up to form for much of 2021, rolled through the competition, securing the most points for either team and Ryder Cup MVP in the process. Johnson became the first American golfer since Larry Nelson in 1979 to go 5-0-0 over the course of a Ryder Cup weekend.

“I did not expect to go 5-0-0, that’s for sure,” Johnson said after his round on Sunday. “But I didn’t really expect to play five matches but obviously got off to a good start, had some good partnerships there with Collin [Morikawa] and Xander {Schauffele], and so captain just kept us rolling.”

Johnson and Morikawa defeated Viktor Hovland and Paul Casey 3&2 on Friday morning in a foursome match, and then he and Schauffele topped Casey and Bernd Wiesberger 2&1 that afternoon in a four-ball. Johnson and Morikawa won twice on Saturday, and then Johnson finished off his perfect weekend by defeating Casey 1 up in a singles match.

Jordan Spieth and Brooks Koepka were on the U.S. team that won in 2016, making it two-straight wins on American soil. They were able to feel a difference in this year’s team than in past tournaments.

“It felt like a player-friendly environment,” Spieth said. “Steve [Stricker] mentioned, there were no big speeches. It was, ‘Hey, you guys took care of business today. Go get your rest, and take care of business tomorrow.’ …he put us in a position to stay out of the way. I don’t want to take away from what the captains did. They did a lot of work setting this up ahead of time and then kind of taking a back seat and guys really took over. And we made a lot more putts than they did and there were a lot more roars [from the crowd].”

“It’s a different group of guys,” Koepka said following his round on Sunday. “It’s a lot more fun than in years past.”

The European team had the reputation of taking the event more seriously. Practicing more and focusing on being a team. The difference in the U.S. team this year, however, was evident to Rory McIlroy, who had won four of his five Ryder Cup appearances prior to this year.

“I think the most important thing for the U.S. team is a lot of young guys that are great players have bought into the Ryder Cup,” McIlroy said. “I think that was probably missing in previous generations. …they are going to be formidable opposition from now until I’m probably not playing Ryder Cups, whenever that is, in hopefully 20 years’ time.”

U.S Team had eight of the top 10 golfers

The U.S. team was favored because they had eight of the top 10 golfers in the Official World Golf Rankings on their side, and they had the highest average ranking as a team in Ryder Cup history. But there was a lingering question of how they would perform against a squad that has had their number in recent years—with Europe winning four of the last five and nine of the previous 11 events.

But the veterans of the European team did not come through. McIlroy was 1-3 while Ian Poulter and Lee Westwood combined to go 2-4. Veteran Sergio Garcia was 3-1, losing his singles match but winning all three team competitions with Jon Rahm, the world’s No. 1 ranked golfer. Rahm was also a bright spot for the European team, going 3-1-1 but ending on a down note by losing his singles match to Scottie Scheffler, who was the lowest-ranked American on the U.S. side.

Morikawa, The Open Championship winner this year, was also undefeated in his four matches, going 3-0-1 after tying Viktor Hovland on Sunday. In fact, Morikawa’s putt to clinch the half-point put the U.S. team at 14.5 and was the official moment that they won the tournament.

“It means so much … to clinch this and bring the cup back to home soil,” Morikawa said afterward. “We didn’t let up … I don’t think this is just a win—it’s a dominant win. Everyone showed up. All 12 of us, when we’re called upon, we show up.”

While the captain for the 2023 team will not be decided for some time, the players were loudly campaigning for Stricker to return for a repeat performance in Italy in two years’ time.

When asked if he would like to see Stricker return, Johnson said, “[Yes], 100%.” Spieth added, “That’s a yes from us.” Regardless of whether Stricker returns, one thing is clear: he ushered in a new era in the Ryder Cup, one that could propel the U.S. to a run of success like the Europeans enjoyed over the past two decades