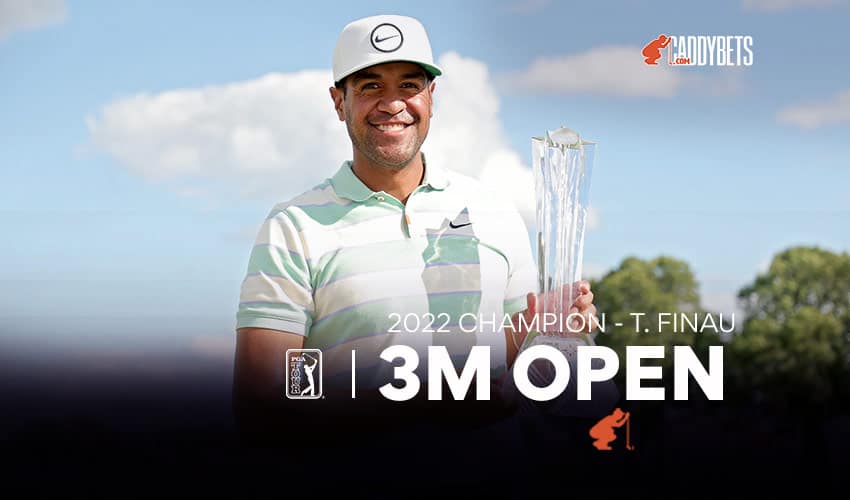 After winning The Northern Trust last year in the FedEx Cup playoffs, hopes were high for Tony Finau this year. Finau had a miserable winter and start to the spring, but after a top-five finish at the Mexico Open, he started to come back around and entered the 3M Open as the betting favorite. Here is our 2022 3M Open Recap.

After hanging around the leaderboard all weekend, Finau’s charge to the front with a 4-under 67 on Sunday, coupled with leader Scott Piercy’s 5-over 76, was enough to win the tournament by three strokes over Sungjae Im and Emiliano Grillo.

Piercy entered Sunday with a four-stroke lead but finished at -13, which was four shots behind Finau’s 17-under 267.

“That’s the great thing about our sport,” said Finau of the respect shared between his peers. “I’ve been on that side of it where you take your hat off and you just congratulate the guy that gets the job done because it takes a lot. It’s tough to win out here. I mean, I think I’m about as good an example as any of how tough it is to seal the deal. Anytime you win one, it’s awesome to get the respect of the guys that you’re playing against, and I was really happy to see Scott. He was genuinely happy for me, which I think makes our game so great.”

After winning in 2016, Finau had 10 runner-up finishes before winning again last August. He didn’t have nearly as long of a winning drought this time. Finau, who entered the day in third place after a 65 on Saturday, finished strong on Sunday, carding three birdies in a row from holes 14-16 and wasn’t impacted by a bogey on 18.

“I expected myself to contend and win again this year, so to be able to do it this late in the season when you’re running out of tournaments and you put that type of expectation on yourself, it’s so satisfying,” said Finau.

He also added that once he saw he was the betting favorite, he felt a new kind of pressure to perform.

“I read something and I was favored to win … for some reason, that just like all of a sudden put some added expectation and pressure on myself,” Finau said. “I knew I was playing well, but then it was like, oh, well, this is a crazy situation because if you win, everybody expected it. If you don’t win, well, he can’t win, right?”

Piercy was looking like he would cruise to the win after sitting at -2 through seven holes, but things went haywire from there. Two bogeys to finish out the first nine, then after being at even par through 12 holes, he bogeyed 13 and then had a disastrous triple-bogey 7 on No. 14. He followed that with two more bogeys over the next three holes to end the day tied for fourth with James Hahn and Tom Hoge.

Danny Willett, Callum Tarren, and Greyson Sigg were tied for seventh at -10, and Chesson Hadley came in 10th at -9.

Up Next on the PGA Tour

There are two more events left until the FedEx Cup playoffs begin, starting with next weekend’s Rocket Mortgage Classic in Detroit. Cam Davis is the defending champ, and Finau will be there looking to make it two in a row. The highest-ranked player in the field is Patrick Cantlay.