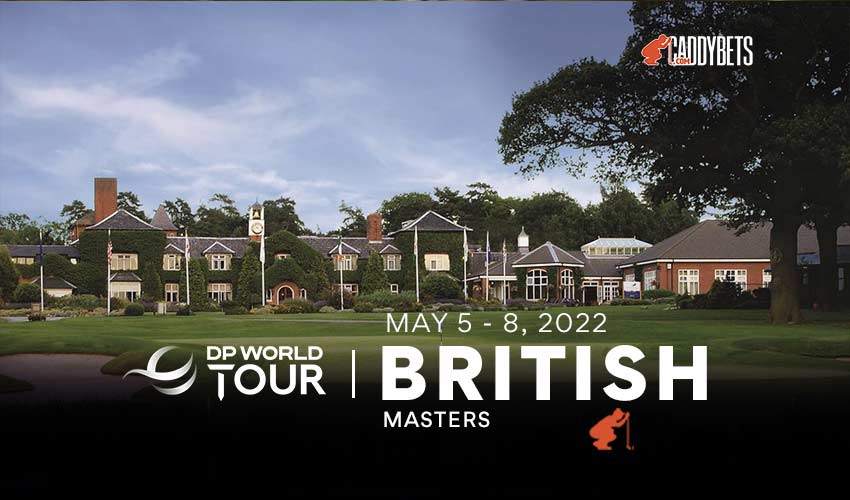 The DP World Tour makes its first trip to the United Kingdom in 2022 for the Betfred British Masters hosted by Danny Willett. Richard Bland won here a year ago, defeating Guido Migliozzi in a playoff for his first European Tour win in his 478th start, becoming the oldest golfer to become a first-time winner on the tour at age 48. Here are our 2022 British Masters Odds, Picks and Preview.

Several other golfers from the United Kingdom are in the field and will challenge Bland in his title defense, including Robert Macintyre, Sam Horsfield, and Lee Westwood.

For the first time since the British Masters resumed in 2015, the tournament takes place on the same course as it did a year ago—The Brabazon Course at The Belfry in Wishaw, England. The course opened in 1977 and was home to the Ryder Cup in 1985, ’89, ’93, and 2002.

Three holes were recently lengthened, so now the course measures 7,310 yards and par is 72. The course is flat with trees on either side of the fairways, and water is in play on seven holes.

Since this event returned to the schedule in 2015, we’ve seen three British winners and two runner-ups from UK-based golfers. Scotland native Robert MacIntyre (+1600) is the narrow betting favorite, having finished tied for eighth here a year ago. He had two top-15 finishes in the United Arab Emirates in February in his last two DP World Tour events, and he finished tied for 23rd at the U.S. Masters.

Adri Arnaus (+1800) is coming off a win last week on his home turf of Spain at the Catalunya Championship, defeating Oliver Bekker (+2500) in a playoff. Adrian Meronk (+1800) finished third last week, marking his second-straight third-place finish on the DP World Tour, and he also finished third here last year.

Sam Horsfield (+2000) has a third, fourth, eighth, and 15th this season and won twice in 2020, including on English soil at the Hero Open. Rasmus Hojgaard (+2000) won the ISPS Handa UK Championship in 2020 here at The Belfry; he hasn’t had great results on the DP World Tour this season, but he does have a sixth-place finish in the PGA Tour’s Corales Puntacana Championship.

Richard Bland (+2500) is making his 500th DP World Tour start and is the defending champion and played two PGA Tour events recently, reaching the knockout round of the WGC-Match Play event and finishing tied for 29th at the Valero Texas Open.

Marcus Armitage (+4500) missed the cut in this event last year but was seventh here in the ISPS Handa UK Championship in 2020, and had three-straight top-15 finishes on British soil from 2020 to ’21. He missed the cut last week but was fifth in his prior tournament (Qatar Masters).

We backed Hennie Du Plessis (+3500) last week, and while he didn’t win, the South African did score his third-straight top-10 finish, giving him results of second, third, and sixth in his last three outings.

Three seems to be Meronk’s lucky number, but he can make the leap to No. 1 this week. We also like Bland to repeat at decent value, and Du Plessis’s recent results can’t be ignored at his current price.

Here are the latest odds from JazzSports for the 2022 Betfred British Masters hosted by Danny Willett.

Join Us to receive your daily golf content! Make sure to stay tuned for the latest Golf Vegas Odds.