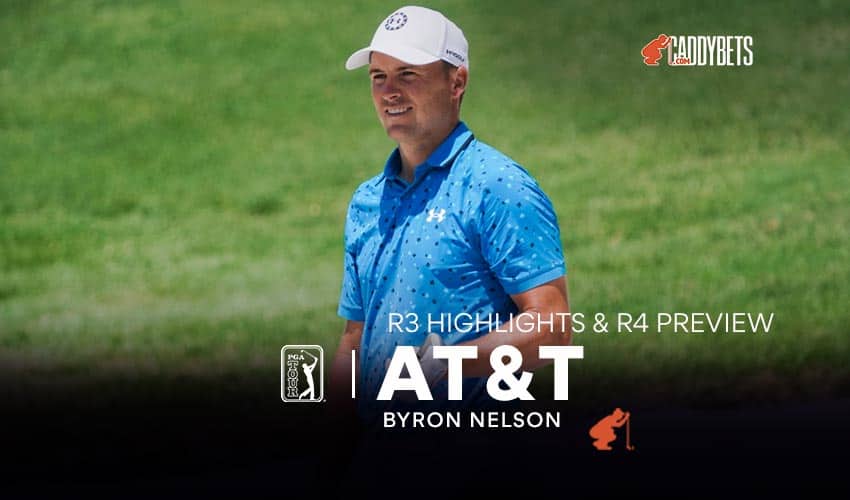 Imagine shooting a 64, which puts you at 2-under for the tournament heading into the final round, but you still aren’t in the lead? That’s the exact position Jordan Spieth finds himself heading into play on Sunday in the final round of the 2022 AT&T Byron Nelson. Spieth finds himself in the final pairing on Sunday with the leader, Sebastian Munoz, who is one stroke ahead at 21-under, and Joaquin Niemann, who sits alone in third place at 19-under after shooting a 65 on Saturday. Here is our 2022 Byron Nelson Round 3 Recap & Round 4 Preview.

Munoz has been terrific all week with both his iron play and his putter, which has put him in a position to win his first PGA Tour event in almost two and a half years. Munoz kept the pressure on the field as he only really got in trouble once on the par-four 16th, where he ended up with a bogey, but he continues to make shots when he needs them, including a 39-foot birdie putt on the par-4 second hole and sank a long bunker shot on the short par-4 sixth.

Dallas-area resident Ryan Palmer, who shared the lead with Munoz after the second round, shot a 70 and was 17-under heading into the final round with a group including defending champion K.H. Lee (67) and 2011 Masters winner Charl Schwartzel (68).

The round of the day came from James Hahn, who almost matched Munoz’s opening-round 60 at TPC Craig Ranch. Instead, Hahn shot an eye-popping 61 to jump 34 spots to a tie for fourth with Justin Thomas (64).

Sunday at TPC Craig Ranch should be exciting, as there are about a dozen golfers within striking distance of the leader Sebastian Munoz. Munoz has been brilliant all week, highlighted by his course record 60, but heading into play on Sunday; he’s not the favorite. That honor goes to the man sitting a stroke behind him at 20-under, Jordan Spieth, who has been inserted as the favorite by Jazzsports at +250. Munoz sits right behind Spieth at +275, which should make for an epic battle within the final pairing.

Speaking of the final pairing, don’t sleep on Joaquin Niemann, who will round out that final pairing and sits right behind the two leaders at +450, as projected by Jazzsports. Niemann can hang with anyone, and it should lead to a dramatic finish as all three golfers will go shot for shot to determine the champion.

Quietly sitting behind the final pairing are two elite golfers that could make the final two holes at the TPC Craig Ranch fascinating, as they will have posted their numbers and be waiting in the clubhouse. Masters champion Scottie Scheffler, who overcame a triple-bogey early in the second round for an outside shot to make a Sunday run, recorded birdies in bunches in a 65 that left him at 16-under, and +2500 odds, as projected by Jazzsports.

It might be a little too much to overcome at this point because I’m projecting the winner to finish around 25-under, but this is the world No. 1, so anything is possible. On the other hand, Justin Thomas is only three strokes back and has seemed to get better with each round. The oddsmakers have taken notice also because his number moved to +550, as projected by Jazzsports. I expect Thomas to put up a significant number today, which will really put the heat on the final pairing, making the 17th and 18th a must-watch Sunday evening.

The 2022 AT&T Byron Nelson final round odds have been posted. Jordan Spieth has been inserted as the favorite, as projected by Jazzsports. In addition, all odds to win the tournament have been updated below:

Follow us on Social Media for 2022 Byron Nelson Round 3 Official World Golf Ranking, and more updates!