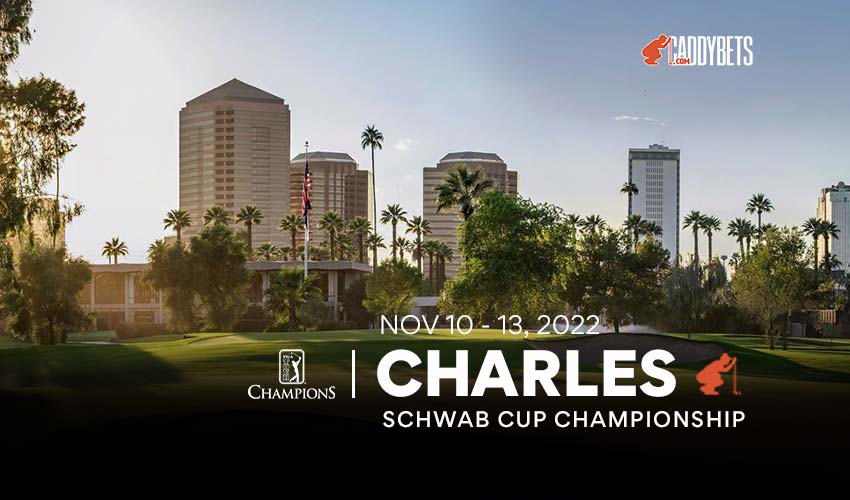 Two golfers playing their first full season on the PGA Tour Champions circuit have a chance to win the season-long title at the series’ final event of 2022—the Charles Schwab Cup Championship.

Unlike the PGA Tour’s FedEx Cup playoffs, the winner of this event does not automatically win the championship. Points, which are based off prize money, are doubled for this event. Similar to the Tour Championship, the field contains 30 golfers and is a no-cut event.

Last year, Bernhard Langer won the season-long title and Phil Mickelson won this event, which goes to show you how much can change in a year. Mickelson, now a part of LIV Golf, will not be here to defend his title.

Since 2017, this tournament has been contested at Phoenix Country Club in Phoenix, Arizona. The par-71 course measures 6,860 yards, giving players plenty of birdie opportunities (Mickelson’s winning score last year was -19).

Alker and Harrington Even Favorites

The two men who are in contention for the season-long Charles Schwab Cup championship are the favorites in this event. Steven Alker (+450) and Padraig Harrington (+450) both turned 50 in August 2021 and are in their first full season on the senior tour.

Alker has the edge for having played on this course before, and he finished second to Mickelson here in 2021. He also has the most wins (four) and top-10s (17 out of 22 tournaments), putting up a dominant season.

Harrington has the advantage of winning in big spots before as a former multiple-time major winner. He also has a third- and a fourth-place finish in his last two events. The Irishman also must win this event if he wants a shot at the Cup championship. Simply put, even with a Harrington win, Alker can maintain his lead with a solo fifth-place finish or better.

Won’t have a chance at repeating as series champion, but he tied the all-time PGA Tour Champions record with his 44th win last week in Florida, winning by a whopping six strokes. In Phoenix, however, his best finish is fourth in 2019.

Was seventh here a year ago and has top 10s in six of his last seven starts. In key stats like scoring and birdie average, he ranks only behind Alker and Harrington.

Further down the odds board, keep an eye on Kevin Sutherland (+3000). He won here in 2017 and ’20, shooting a -15 despite the 2020 edition being just a 54-hole event. He was tied for 24th last year, but that was mainly due to an opening-round 72 (he was 68 or better in the final three rounds). Sutherland also comes here in good form, finishing a season-best fifth last week and was 11th in the first playoff event the week before.

Of the top two, we have to favor Alker given his impressive campaign and a strong performance here last year. Our mid-range pick is Jimenez, and Sutherland tops our longshots.