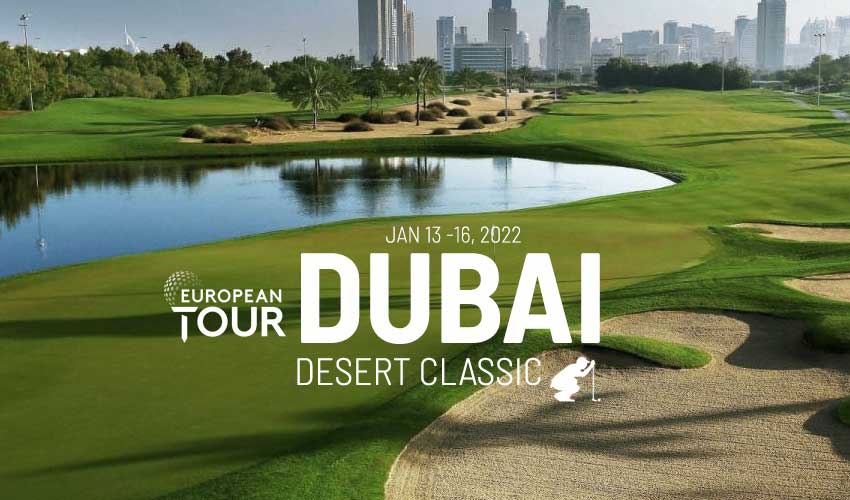 The DP World Tour (formerly the European Tour) remains in the Middle East country of the United Arab Emirates this week, moving from Abu Dhabi to Dubai for the Dubai Desert Classic.

This is the second of four-straight events in UAE, and five overall with November’s season-ending DP World Tour Championship, but this was the first event to be held in the Middle East in 1989. Since then, several of golf’s greats have won here, including Ernie Els, the only three-time winner of this event, and two-time winners Tiger Woods and Rory McIlroy.

This year, the event gains even more prestige, as it becomes part of the Rolex Series for the first time. That means an increased purse, up from $3.25 million to $8 million this year. McIlroy, Collin Morikawa, and Viktor Hovland are three of the world’s top-10 golfers who are here, and defending champion Paul Casey returns after winning the event by four strokes last year.

The front nine is par 35, while the back nine hosts three of the course’s four par-5 holes and is par 37. Golfers’ rounds end with the second-longest hole on the course—a par-5 that measures 564 yards.

A new challenge for 2022 at Emirates Golf Club is a new putting surface. All 18 greens have been redone, adding about 33% more area to them, giving more variety for the pin positions.

Rory McIlroy (+750), after narrowly making the cut at the Abu Dhabi HSBC Championship last week, rallied to get within a shot of the lead on Sunday before falling back for a 12th-place finish.

McIlroy has a great history here, winning his first professional tournament at this event in 2009 and won again in 2015. He was runner-up in his last appearance in 2018. The 14-time winner on the DP World Tour is also in fine form, having won a PGA Tour event last fall, finishing sixth at the DP World Tour Championship, and coming in 12th last week despite not playing his best golf on the links course. Emirates GC better suits his game, and we would expect better results.

Where McIlroy has been in the past few months, Collin Morikawa has been right with him. The defending Race to Dubai champion is at +1100 this weekend, and the last time we saw him in Dubai, he outdueled McIlroy to win the DP World Tour Championship in November. Morikawa also finished runner-up to McIlroy in The CJ Cup in Las Vegas last October.

Morikawa was a disappointing 62nd last week in Abu Dhabi and spent all of Monday this week working on his swing to try and get in contention for this weekend’s event.

The third favorite is Viktor Hovland, who has been on fire the last few months. After winning a PGA Tour event in Mexico for the second-straight year, Hovland won the Hero World Challenge—an all-star type event in the Bahamas—after Morikawa collapsed and lost a five-stroke lead in the final round. The Norwegian was then in contention last week, finishing fourth in Abu Dhabi to jump up to No. 5 in the Official World Golf Rankings.

Tyrrell Hatton (+1800) was the defending champion of last week’s event and rallied with a Sunday-best 67 to finish tied for sixth last week. He was 16th at the DP World Tour Championship and second at the Alfred Dunhill Links Championship in his tournament before that. Last year, he was 22nd in this event.

Sergio Garcia, a former winner here, is at +2200, and while he doesn’t have spectacular results, his worst finish in his last five DP World Tour events is 26th. He’s also been excellent in Rolex Series events, logging six top-10 finishes in eight starts since 2017 with a best finish of second at the Nedbank in 2018.

Thomas Pieters is among a group of four at +2500. Pieters has wins in two of his last three starts, claiming victory in Abu Dhabi last week and winning the Portugal Masters last November. In between, he finished 15th at the DP World Tour Championship.

Defending champion Paul Casey is also at +2500, and he also owns two other wins in UAE with victories in Abu Dhabi in 2007 and ’09. Scores were down last year, but he ran away with the win by four strokes even though he carded a 17-under for the tournament. The Englishman has three top-10s in his last five tournaments staged by the DP World Tour, including a ninth at the DP World Tour Championship, a fifth at the WGC-FedEx St. Jude Invitational, and a seventh at the U.S. Open.

Bernd Wiesberger (+3000) has three top-10s in this event, including a sixth last year. The additions to the putting surface should help his greens-in-regulation total.

Rafa Cabrera Bello (+4000) proved his win at the Open de Espana last fall wasn’t a fluke by finishing tied for second last week in Abu Dhabi. He also comes to Emirates GC as a former winner of this event (2012).

Nicolai Hojgaard (+5000) has the same odds as his twin brother Rasmus, but Nicolai is worth a flier with feast-or-famine performances recently. Hojgaard missed the cut in Abu Dhabi last week but was fourth in Dubai last November and second in Portugal two weeks before that. He had two missed cuts in October but won the Italian Open in September, so if he gets off to a good start this weekend, he could be in contention on Sunday.

Shubhankar Sharma (+7500) is similar to Hojgaard, and he has some great results as of late too. Besides finishing tied for second last week, he was third behind Cabrera Bello at the Open de Espana.

While McIlroy and Morikawa are the big names, we favor Hovland with the way he’s been playing if you’re going to take a favorite. We’re not sold on any of the mid-range picks—Sergio Garcia is intriguing but +2200 isn’t good value. See where he ends up after round 1 before deciding. Wiesberger and Cabrera Bello are strong value plays.

Join us to receive our daily Golf content, and make sure to stay tuned for Thomas Pieters updates, golf news, and PGA Tour schedule.