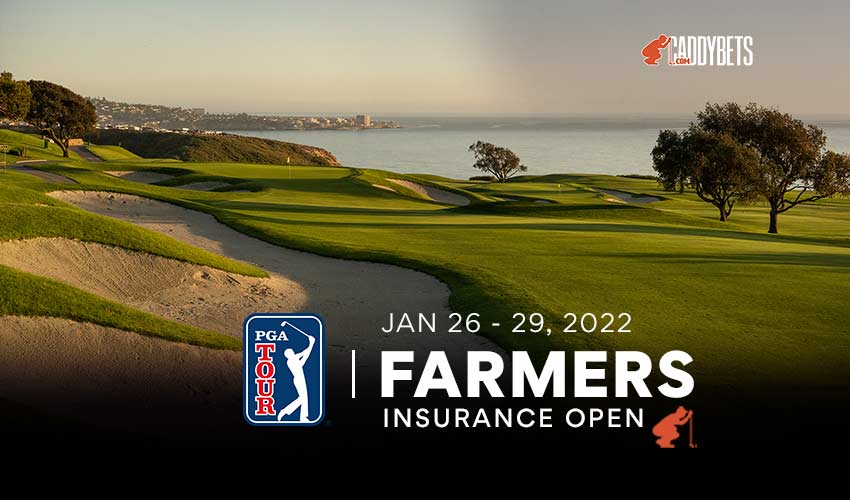 It was a week of upsets at The American Express in La Quinta, California, as 250-1 underdog Hudson Swafford was on top of a leaderboard that had just one golfer ranked in the top 35 in the world among the top-10 finishers (Patrick Cantlay in ninth). Now, the PGA Tour moves south to Torrey Pines in San Diego for the 2022 Farmers Insurance Open, a course, and event that Jon Rahm, the world’s No. 1 golfer, holds near and dear to his heart.

We’ll get into that shortly, but first, the event has been part of the PGA Tour since 1952 with everyone from Arnold Palmer to Tiger Woods winning here. Woods, in fact, holds the record with seven wins here in a 15-year span. Phil Mickelson has won three times, and Palmer, Tom Watson, and Jason Day are among the two-time winners of the event. Woods holds the tournament record (1999) with George Burns (1987) at a 22-under 266.

Since 1968, what is now known as the Farmers Insurance Open has taken place at Torrey Pines Golf Course, a municipal 36-hole course.

Golfers will play a round each on the North and South Course, and those who make the cut (top 65 and ties) will play the final two rounds on the South Course. Both are par 72, and the South Course measures 7,765 yards, the longest course on the PGA Tour.

Jon Rahm (+700) has played in the Farmers Insurance Open five times, winning his first-career PGA Tour event in 2017 and finishing in the top seven over the last three years here, including a runner-up in 2020. In addition, Rahm won the U.S. Open here last June by one stroke over Louis Oosthuizen. Rahm has had his heroics on No. 18 as well, as he eagled the hole to win the 2017 tournament in walk-off fashion.

Rahm is the overwhelming favorite here due to his stature as the top-ranked golfer in the world in addition to his tremendous record at this course.

Justin Thomas (+700) hasn’t played in this event in six years, but he was 19th at the U.S. Open here last year. But even though the 14-time winner hasn’t had a victory since The Players Championship last March, Thomas is on quite a run since late August—a fourth at The Northern Trust and Tour Championship, third at Mayakoba in October, and back-to-back fifth-place finishes in his last two tournaments—the Hero World Challenge and Sentry Tournament of Champions in Hawaii three weeks ago.

FedEx Cup points leader Hideki Matsuyama is one of three golfers at +1800 going in. He’s finished in the top 20 here on three occasions, including a third in 2019. He took last week off but has two wins in his last three starts—the Sony Open in Hawaii two weeks ago and the ZOZO Championship in Japan last fall.

Xander Schauffele (+1800) was born in La Jolla and studied at San Diego State University. It took him six years, but he made some noise in this event last year, finishing second behind Patrick Reed, though he was four shots behind Reed after 72 holes. Schauffele has been okay but not great since winning a gold medal at the Olympics last summer—his last two starts netted 12th-place finishes at the Hero World Challenge and Sentry Tournament of Champions.

Bryson DeChambeau is also at +1800, as his power will serve him well at the longest course on the PGA Tour. He hasn’t played this event in four years, but he was fourth going into the final day at the U.S. Open last summer before faltering a bit on Sunday to finish 26th. DeChambeau hasn’t had a large sample this year, playing just twice since the Ryder Cup with pedestrian results—14th at the Hero World Challenge and 25th at the Sentry Tournament of Champions.

Dustin Johnson (+2000) made history at the Ryder Cup Team USA by becoming the first golfer to go 5-0-0 in the modern era, leading the U.S. team to a dominating win over the Europeans. But we haven’t seen him since The CJ Cup in October, where he came in 45th but overcame a poor start (74 in the opening round), following that up with a 66 and back-to-back 67s. It almost feels like he’s flying under the radar here, but Torrey Pines hasn’t been too kind to him—a third in 2015 is his only top-10 in nine starts.

Will Zalatoris (+2500) began to make a name for himself as a rookie here last year by finishing seventh, and after scuffling a bit in the fall, he came back to finish sixth at La Quinta last week after shooting a 61 on the Nicklaus Course at PGA West.

Francesco Molinari (+7000) is a name we haven’t heard much of recently, but he came out of nowhere to finish tied for sixth at The American Express last week and was 10th here at the Farmers last year.

Marc Leishman (+3500) has a tremendous history at Torrey Pines, logging a win in 2020 to go along with two runner-up finishes and two more top-10s. In addition, he started the fall season with a fourth and a third and was the 10th at the Sentry Tournament of Champions.

And finally, there’s last year’s winner, Patrick Reed (+4000). While he has never won an event in back-to-back years, Reed has five-straight top-25s at Torrey Pines, including one in last year’s U.S. Open. He logged a third at the Hero World Challenge and was tied for second at the Butterfield Bermuda Championship in October.

In addition to Rahm, Matsuyama and Zalatoris are our best bets among the second-tier of favorites. There’s great value with Dustin Johnson and even more so with Molinari, whose long-hitting game suits Torrey Pines well.

Join us to receive our daily Golf content, and make sure to stay tuned for 2022 Farmers Insurance Open updates, golf news, and PGA Tour schedule.