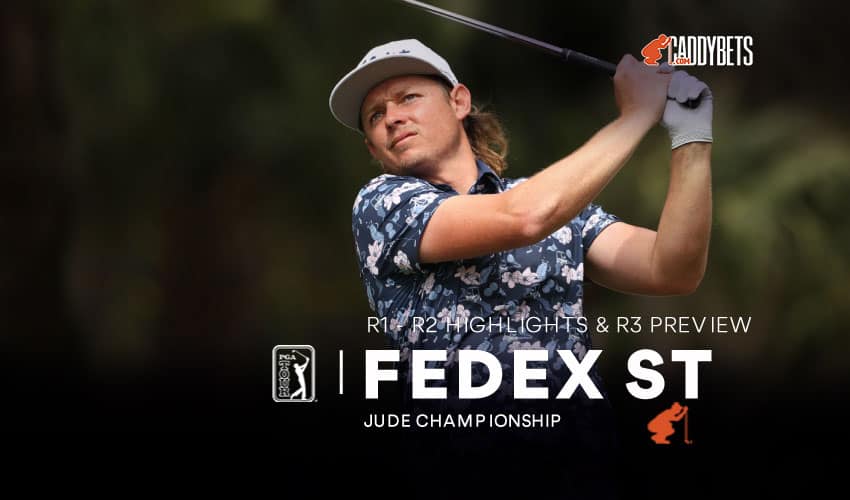 With 36 holes remaining, it’s world number 98 J.J Spaun who leads the way by one stroke at -11. Chasing the Americans are the largely unheralded duo of Troy Merritt and Sepp Straka.

With 125 players being reduced to just 70 after the weekend, it should be a fascinating final two rounds as everybody tries to put themselves in the best position possible ahead of the FedEx Cup finals.

J.J Spaun leads by one stroke

The weather over the first two days has contrasted. For the opening round the players were met with lovely warm temperatures which made TPC Southwind very accessible.

On Friday, the course bit back. With firm and fast conditions, scoring was a lot trickier and it looks set to remain that way over the weekend.

Positioned nicely after a bogey-free opening round of 62, Spaun played nicely in his second round to shoot a -3, 67.

A winner earlier in the season at the Texas Open it will be interesting to see how Spaun handles the pressure of leading such a prestigious tournament.

Despite a lack of big names at the top of the leaderboard, there are dangers lurking.

Tony Finau who is looking for his third successive tournament victory has continued his great form and sits just three strokes off the lead.

Joining him at -8 is the recently crowned Open Champion Cameron Smith. Smith has courted controversy in recent weeks by refusing to deny reports that he is set to join the LIV Tour. The pugnacious Aussie has managed to put all the noise behind him and looks primed for a weekend challenge.

All odds courtesy of Jazz Sports.

Despite not sitting at the top of the leaderboard and starting day three behind, the current favorite for the tournament is Cameron Smith. It’s easy to see why. When playing well there is no finer putter on Tour,  and the three-shot deficit he currently faces can quickly be erased.

Next in the betting comes the big-hitting Tony Finau. Over the last few weeks, Finau has been nothing short of sensational, winning his last two tournaments with relative ease. Finau is starting to become one of the major forces in world golf and it wouldn’t be a surprise if he were to notch his third successive win here.

Tournament leader J.J Spaun is the third favorite, and although he might lack the pedigree of the two above him, he shouldn’t be slept on. He has scored 13 birdies across his first two rounds and if he can keep that level of scoring up he will be hard to peg back.

The tournament is so delicately poised, there is value everywhere you look.

Despite being five strokes behind, Justin Thomas will be looking to make serious inroads into the lead today and is very backable +1600.

US Open Champion Matthew Fitzpatrick will still be riding the crest of a wave after netting his first major. Fitzpatrick has the game to do well this weekend and is another player who will be looking to make a serious move up the leaderboard.

Join Us to receive more 2022 FedEx St Jude info! Make sure to stay tuned for the latest Golf Vegas Odds,