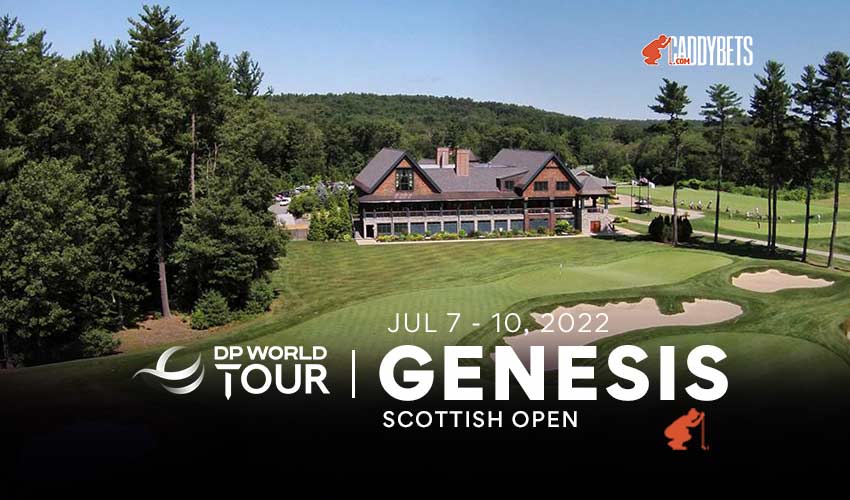 What was a European Tour (now DP World Tour) event is now also a full event on the PGA Tour that pays 500 FedEx Cup points to the winner and features several of the world’s top golfers. It’s part of the “strategic alliance” that was formed between the two tours last year, as both tours are hosting events this weekend that have players from each group in them.

The Genesis Scottish Open features 75 PGA Tour and 75 DP World Tour pros, many of whom are in the country a week early before next week’s Open Championship at St. Andrew’s. This event is typically held before the Open and last year was won by Min Woo Lee in a playoff over Thomas Detry and Matt Fitzpatrick, who is playing this week for the first time since winning the U.S. Open last month.

On the DP World Tour side of things, this is a Rolex Series event with a purse of $8 million. It has been played annually since 1986 with the home of the event changing several times.

Since 2019, the Scottish Open has been held at Renaissance Golf Club near Edinburgh. The course was created by an American group but it is fully a Scottish course—it was created as a tribute to Scottish golf. It’s a coastal course that can see the wind pick up on it, but that has yet to occur in the three Scottish Opens that have been held here so far. Lee won here at -18 last year, Aaron Rai won at -11 in 2020, and in 2019, Bernd Wiesberger topped Benjamin Hebert in a playoff after both shot -22, which is the tournament record to par.

Renaissance is a par-71, 7,303-yard course that is expected to play more to its difficult potential on Friday with some winds in the forecast, but calm conditions are otherwise expected.

Who is headlining the field?

Scheffler and Rahm Favored to Win

Scottie Scheffler and Jon Rahm are the co-favorites here at +1000. Scheffler played in last year’s event and finished tied for 12th. While you may think Scheffler is in a slump just because he didn’t continue his streak of winning four out of six events that ended with his Masters triumph, the results show that’s not the case. He did miss the cut at the PGA Championship, but he was tied for second at the U.S. Open and also finished second at the Charles Schwab Challenge in late May. The FedEx Cup points leader took last week off after coming in 13th at the Travelers Championship.

While Rahm has one win this year and hasn’t contended often against loaded fields, the Spaniard leads the PGA Tour in Shots Gained: Off-the-Tee, is fourth in driving distance, and is second in greens in regulation percentage—all stats that will play into his favor here at Renaissance. His win at the Mexico Open is his only top-five finish since a third at Torrey Pines in January, but Rahm’s last two tournaments were a 10th at the Memorial and 12th at the U.S. Open, and he’s had two weeks of rest since Brookline.

Justin Thomas (+1400) has an edge here as he’s played the last two editions of this event and finished in the top 10 each time. Even more impressive, however, is his level of consistency: the reigning PGA Championship winner has a 64 and three 65s among his eight rounds at Renaissance. He was 37th at the U.S. Open that capped off a stretch where he played five tournaments in six weeks, so a couple of weeks to recharge will likely be to his benefit. In those five events, Thomas had three top-fives: his win at the PGA, a fifth at the Byron Nelson, and third at the RBC Canadian Open, where he had a tremendous final-day duel with Rory McIlroy.

Matt Fitzpatrick (+1500) has two great things going for him: a two-week rest after winning the U.S. Open, and playing his first tournament after that major triumph at a course he’s had success on. Fitzpatrick reached a playoff at Renaissance last year and shot a -17 to finish 14th in 2019. He was also runner-up at the DP World Tour’s biggest event last year—the DP World Tour Championship, Dubai.

Xander Schauffele (+2000) comes in with confidence and a week of rest after winning the Traveler’s Championship two weeks ago, and he played in this event last year and finished 10th.

Will Zalatoris (+2800) has had two weeks to recover from another heartbreaking runner-up in a major—his second in a row and third in his short career—after finishing second to Fitzpatrick at the U.S. Open. The second-year pro comes in looking for his first win and has five top-six finishes in his last seven events, dating back to the Masters.

Many DP World Tour regulars are afterthoughts on the odds board this week, including Adrian Meronk (+5000), who won the Irish Open last week and has three top-six finishes in his last four starts.

Ryan Fox (+4300) missed the cut at the U.S. Open but has been outstanding over the past month in Europe, posting runner-up finishes last week in Ireland and at the Dutch Open in May and also has a third-place finish at the BMW International Open two weeks ago.

Christiaan Bezuidenhout (+7500) finished here last year with a 66 on Sunday to place 44th at 8-under, but he also is coming off his best PGA Tour finish at the John Deere Classic last week, where he tied for runner-up and qualified for next week’s Open Championship.

Since they are getting a little more value, we favor Thomas and Fitzpatrick over Rahm and Scheffler, while it would be difficult to bet against Zalatoris with the way he’s playing. Sam Burns is also an unheralded player who is worth a flier this week. Fox and Meronk are our favored underdogs.