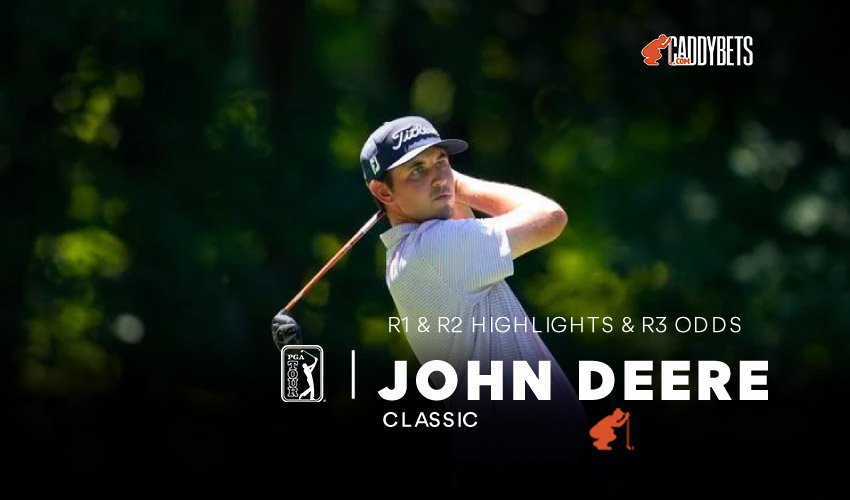 We have reached the halfway point of this 2022 John Deere Classic and this famous old tournament looks delicately poised.

Leading after two rounds and in firm contention for one of the three Open qualifying spots available is world 99 J.T Poston.

Poston leads the way on -15 following two stunning rounds of 62 and 65. Poston has led from the very start and has only shot one bogey across his first 36 holes. Poston holds a four-shot lead over his nearest competitors and might take some serious chasing.

Nestled in behind Poston is Denny McCarthy who will start today at -11. Like Poston, McCarthy has only dropped one shot in the tournament so far but hasn’t quite been able to convert all of his chances. McCarthy has been in fine form of late managing to finish in a tie for 5th at the Memorial and a tie for 7th at the US Open. Having knocked on the door recently, McCarthy will be hoping to smash through it this weekend and net his first PGA Tour title.

Just one stroke behind McCarthy are a group of four players which include Emiliano Grillo, Chris Naegel, Matthias Schwab and Chris Gotterup. Despite all being five strokes behind Poston, the course is there to be shot at this weekend and their deficit can quickly be clawed back.

Anybody within ten shots will believe that they have a chance of winning. TPC Deere Run has long been regarded as one of the easiest courses on Tour. Over the years we have seen numerous winners of this tournament record scores in the -20s. Birdies and eagles are very much the order of the day and if Poston’s putter turns cold, there will be a whole host of names trying to take advantage.

Despite J.T Poston holding a four-stroke lead, many players will believe that they are in with a chance of victory this weekend. A low score today could see them right in the mix for tomorrow’s final round.

Last week we saw Xander Schaufelle convert a five-stroke lead at the halfway stage of the Travelers and Poston is priced at +135 to convert his halfway lead to a victory.

It’s clear that Poston has been playing by far the best golf in the field but with the prospect of qualifying for the 150th Open coupled with the opportunity to win his second PGA Tour title all on the line, winning this tournament still seems a very long way off.

Denny McCarthy is next in the betting at +700 and as we have already stated, there is perhaps no man in better form than the American. McCarthy will be able to keep tabs on Poston in today’s final pairing and will be hoping to capitalize on any slip-ups from his American rival.

Amongst the group of players at -10, there are a few names that will be unfamiliar even to the most ardent of PGA Tour viewers.

Chris Gotterup is a Tour rookie and is only playing in his fifth PGA Tour event. A national champion whilst at the University of Oklahoma, Gotterup leads the field for overall driving distance. Gotterup is only playing thanks to a sponsor exemption. A win this weekend could launch his career into a different stratosphere. The odds of +1600 could be a steal if the young American can keep his ball out of trouble.

The best score from yesterday’s second round belonged to Kelly Kraft. At 532 in the world, Kraft is a name we aren’t accustomed to seeing near the top of the leaderboard but after shooting an -8, 63, Kraft will carry a lot of positive momentum into today’s third round. Kraft has never won on the PGA Tour but odds of +6000 look huge for a player who clearly has his putter on fire.