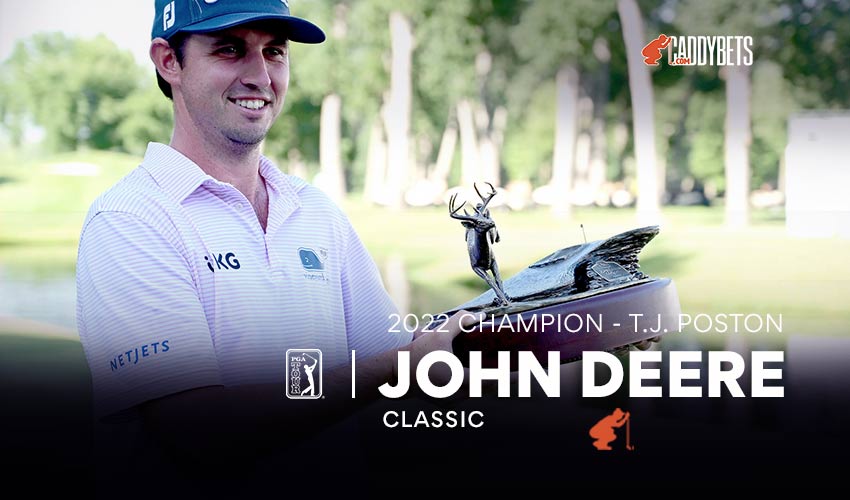 J.T. Poston followed up his 62 at the Travelers Championship last Sunday to finish in runner-up behind Xander Schauffele with another 62 in the first round of the 2022 John Deere and never looked back, winning the tournament by three strokes with a 21-under 263.

Poston, 29, won for the first time in over three years and secured plenty with the victory—including a spot in The Open Championship at St. Andrews in 10 days along with a spot in next year’s Players Championship and Masters.

“I think I put a little more pressure on myself kind of the last couple years, trying to get that second win and trying to be perfect again,” Poston said. “I think it took a little while for me to realize or accept that it’s OK to make a mistake as long as you limit them, and that was something that I would say I finally realized this year and tried not to be perfect, but just tried to be real solid.”

After coming into Sunday with a three-shot lead, Poston birdied the first three holes on Sunday in what was looking like an easy day at the office, but two bogeys followed. He settled in after that, however, racking par after par aside from a birdie on 17 that put him at a 3-under 69 for the day.

“I feel like it could have been easy to get real excited and start thinking about the finish line,” Poston added. “I tried to stay one shot at a time and focused on what I had in front of me. But it’s just kind of just how I’ve always been.”

Poston’s win was the first wire-to-wire victory at the John Deere Classic since David Toms in 1992.

Christiaan Bezuidenhout and Emiliano Grillo finished tied for second at -18, and both received a tremendous consolation prize for the effort—a spot at St. Andrew’s as well, as the top finishers who weren’t already in the Open field.

Christopher Gotterup and Scott Stalling tied for fourth at -17, and Denny McCarthy and Callum Tarren were at 16-under to share sixth place. Maverick McNealy and Cam Davis were eighth at -15, and rounding out the top 10 were Patrick Flavin, Chesson Hadley, and Michael Gligic at -14.

In the U.S., the Barbasol Championship takes place in Kentucky with more pros from each tour taking part. The winner, if he hasn’t already qualified, will make the field for The Open Championship. Seamus Power is the 2021 champ and is back to defend his crown.