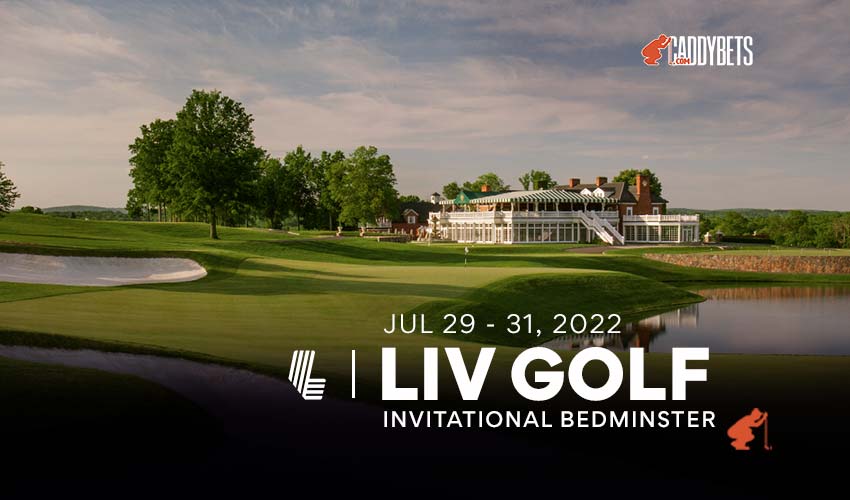 LIV Golf is adding star power to its lineup and has its strongest field to date going into this weekend’s 54-hole event that begins on Friday in Bedminster, New Jersey.

The first two events of the LIV Golf Invitational Series have been dominated by South Africans, as Charl Schwartzel won the LIV Invitational in London in June, and Branden Grace followed that up with a win in Portland, Oregon earlier this month. Four of the top-five money leaders also are South Africans—Grace and Schwartzel leading the way, followed by Hennie du Plessis in third and Louis Oosthuizen fifth.

This week’s favorite, American Dustin Johnson, is fourth on the money list. All five are part of a 48-player field for the third of eight no-cut events in the first year of LIV Golf. A team competition of 12 four-man teams will also take place concurrently with the no-cut, stroke play event, and the top three teams at the end of the event split an additional $5 million in prize money. The individual winner will receive $4 million of a $20 million purse.

Trump National Golf Club Bedminster contains 36 holes of golf, which were designed by Tom Fazio and Tom Fazio II. Golf Digest and Golf Magazine ranks the Old Course as one of the top 100 courses in the United States. It’s a par-71, lengthy 7,591-yard course that the LIV pros will tackle on three occasions.

The tail end of the course is marked by a reachable par 4 for hole No. 17, but for those going for the green in one, both water and sand will have to be dodged. The safer play is to lay up and then take a wedge onto the green, but if players are in need of making up strokes, you could see some going for the gold (or green, in this case). The 18th is a par 5 that can also be reached in two if a player is willing to take on the water.

Johnson and DeChambeau Favored After Solid Outings at St. Andrews

Was in contention for the entire Open Championship at St. Andrews two weeks ago, becoming the highest-finishing LIV golfer with a sixth-place finish. Johnson also was eighth in the inaugural LIV event and followed it up with a third at Pumpkin Ridge in Oregon. He’s the most talented golfer in the field and showed it two weeks ago by playing elite golf in the Open Championship.

Is playing in his second LIV event after coming in 10th at 2-under in Portland. He had his strongest outing of 2022 at the Open, starting the tournament well and finishing strong with a 6-under 66 in the final round to end up at -12 and tied for eighth place. Health has been a problem for the big hitter, but it looks like he’s showing his old form more consistently in the past month.

Was 11th in his first LIV event in Portland, but the Mexican star has had nice results over the past year. He won the WGC-FedEx St. Jude Invitational on the PGA Tour last August and has several strong finishes this year, including a ninth at the PGA Championship and 11th at the Open. His last competitive round was a 65 at St. Andrews.

Was one of the hottest golfers on the planet last year at this time, posting several top-five finishes in majors and other PGA Tour events last summer. An injury derailed him a bit this year, and he missed the cut at St. Andrews, but he has shown improvement in two LIV events so far, posting a 12th in London and then a fifth in Portland.

Have both won this season on the PGA Tour. Kokrak, in fact, won three times in a 13-month span from October 2020 to November 2021, when he won the Houston Open by two strokes over Masters champion Scottie Scheffler. This will be his first LIV Golf event.

Missed the cut at St. Andrews and then departed for his honeymoon. We shall see if he returns relaxed and refocused or if he’s not in a golfing mindset after not picking up a club for two weeks.

Will look to continue his dominant ways in this series, as he was third in London before winning in Portland. In each event, he closed out with a 65 in the final round, so he’s playing well under pressure too.

Was known as a golfer who could win at any given time on the PGA Tour when he was healthy, and a third-place finish in his first LIV start in Portland showed that he is competing once again.

Finished runner-up in London but struggled to a 33rd place finish in Portland. He started fine with a 70 but then went 75 and 77 in his final two rounds. Du Plessis had a hot April on the DP World Tour, posting a second, third, and sixth in three consecutive events.

Is a major longshot but may have a chip on his shoulder after being stripped of the captaincy of the European Ryder Cup team after joining LIV Golf this week. This is his first event on the new tour. He made four-straight cuts on the PGA Tour in April but missed his last four, including the Open Championship two weeks ago.

It’s tough to stay away from Johnson here, even with the short odds. We’re also backing Ancer, Grace, Reed, and Kokrak.