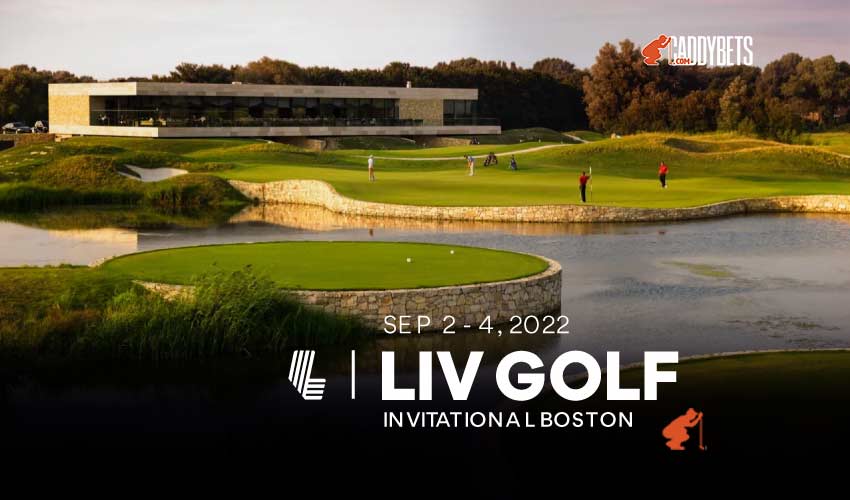 The fourth event of the inaugural LIV Golf Invitational Series takes place this Friday through Sunday in the Boston area. Here is our 2022 LIV Golf Boston Betting Preview.

The new league took the past month off for the PGA Tour’s FedEx Cup playoffs, but now that the season is over, LIV Golf announced some new members and is ready to go with the first of five events from now until the end of October.

The LIV Golf format features a team competition of 12 four-man teams that takes place concurrently with the no-cut, stroke play event, and the top three teams at the end of the event split an additional $5 million in prize money. The individual winner will receive $4 million of a $20 million purse.

The individual portion of the event features 48 players who will play three rounds. There is no cut.

The Oaks Golf Course at the International Golf Club in the Boston area is the host of this event. It has not hosted a PGA Tour event in its history. It’s a par-72, 6,944-yard track that features tree-lined fairways, strategically placed bunkers, and some waste bunkers in some fairways. The 18th hole is a challenging way to finish the course—a par-5, 578-yard hole that requires both distance and accuracy if someone is to reach the smaller green in two.

Cameron Smith (+600) coming to LIV Golf was the worst-kept secret in the sport. The Open Championship winner didn’t deny it after winning at St. Andrews or during the past few weeks during the FedEx Cup playoff schedule.

Smith pulled out of the BMW Championship two weeks ago with a minor injury and finished 22nd at the Tour Championship last week, so he may be dealing with some nagging soreness this week. In addition to winning his first major in July, Smith also won The Players Championship in March and the Sentry Tournament of Champions in the first tournament of 2022, so all three of his wins came against top-tier competition.

Dustin Johnson (+700), who is third on the LIV Golf money list despite not having won an event, is just behind Smith on the odds board. The 2020 Masters winner has finished eighth, fourth, and third in his three LIV events, and he has won the team competition in two of the three LIV tournaments so far. Johnson also recorded a top-10 at St. Andrews, finishing eighth to become the highest LIV Golf pro in the 150th Open.

Joaquin Niemann (+900), another recent signee from the PGA Tour, was 11th at the Tour Championship this past weekend. The highlight of his year was winning The Genesis Invitational against a strong field at Riviera in February, and he also finished the season strong. Prior to his 11th at East Lake Golf Club in Atlanta, Niemann was 13th at the 2022 FedEx St. Jude Championship and eighth at the BMW Championship.

Patrick Reed (+2000) has a third and a fifth in his two events with LIV since joining the tour, and he always seems to play well when he feels like he’s been slighted. He’s been embroiled in a war of words with commentator Brandel Chamblee, so expect him to take that fuel as extra motivation this week.

Harold Varner III (+2000) is making his LIV Debut and won the Saudi International this year over much of the same competition, including draining a 90-foot putt for eagle to win that event in dramatic fashion. Consistency has been a problem for Varner III, however, as after that win on the Asian Tour and back-to-back top-five finishes on the PGA Tour in April, he didn’t record another top 10 and missed the cut in three of his last six tournaments. He has the ability, however, to win just about any time he’s on the course.

The three winners so far in the LIV Golf Invitational Series are not on the odds board, showing the unpredictable nature the series has seen so far. The first event in London, which did not have as good of a field as more recent events, was won by Charl Schwartzel (+4000). He finished out of the top 15 in the two events since.

Branden Grace (+3000) has been more consistent, following up a third-place finish with a win in Portland. He struggled at Bedminster in New Jersey but railed to finish 13th after shooting a -3 in the final round.

The winner at Bedminster was Henrik Stenson, who truly came out of nowhere to win after joining the series earlier that week and hadn’t won on the PGA Tour in five years. He won that event at +7500 and is +4000 this week.

The other veterans who have to be considered, along the lines of Stenson last month, are Sergio Garcia (+2500) and Graeme McDowell (+7000). Garcia started slow but did finish in the top 10 at Bedminster.

Also at +2500 is Matthew Wolff, who was eighth at Portland and improved to second place in the most recent LIV event.

While Johnson has been the most consistent golfer in the series, each event has produced somewhat of a surprise winner. We’re not sure about backing Smith as the favorite due to his injury two weeks ago and a subpar performance at the Tour Championship. We like Niemann of the newcomers along with Reed, Wolff, and Grace.

Here are the latest odds from Jazz Sports for the 2022 LIV Golf Invitational Series in Boston.

Sign up to get a 50% welcome bonus on your pick! Make sure to stay tuned for the Latest Golf News, PGA Tour schedule & Players Top Rankings!