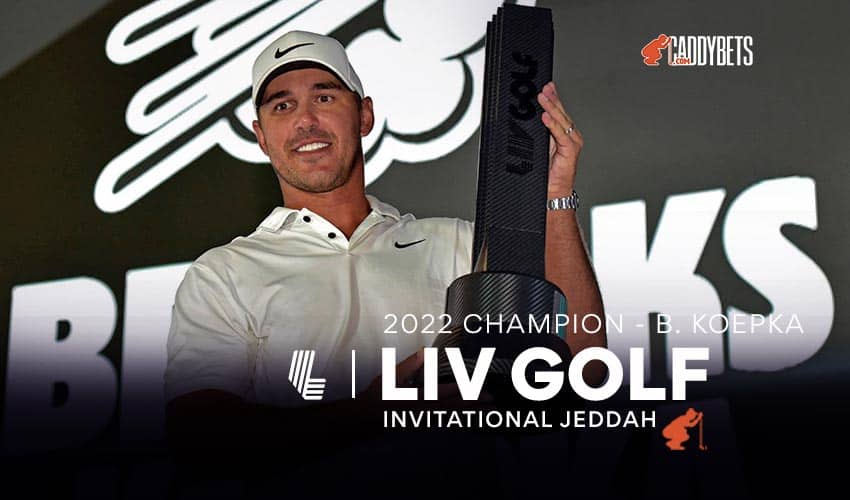 Brooks Koepka, a four-time major winner, put the most difficult year of is pro career behind him and came away with a victory at the LIV Golf Invitational Series Jeddah on Sunday in the longest playoff in the young history of the circuit. Here our 2022 LIV Jeddah Recap

Koepka, who dealt with injuries to his knee, wrist, and hip over the past year, birdied the third playoff hold to defeat Peter Uihlein to win the tournament and the $4 million prize for doing so. The win also marked the seventh different golfer to win the seven individual events of the inaugural LIV season.

Koepka and Uihlein, who are teammates on the Smash GC team, broke a tie with Sergio Garcia and Joaquin Niemann by birdieing the 18th hole to reach the playoff. By virtue of their 1-2 finish, Smash GC won the team portion of the event.

“Honestly, to me the big thing today was getting the team win,” said Koepka, who shot a final-round 69 to finish regulation at 12 under with Uihlein. “I told my brother I’d buy him a Lambo if we won the team thing, so I’ve got to go by one.”

The top-two finishers, along with Chase Koepka and Jason Kokrak, were a combined -33 for the event, six better than the Fireballs GC, which is captained by Garcia and won the team event last week in Bangkok.

Dustin Johnson, who finished sixth this week, was already the individual champion of the 2022 LIV Golf Invitational Series, as he could not be caught going into this tournament. Second and third place (and their $8 and $4 million bonuses, respectively) were still up for grabs. Branden Grace, who won the second LIV event in Portland, Oregon, held onto second place despite not earning any points for his finish outside the top 24.

Uihlein, despite not winning this event, took home the $4 million bonus for third place in the standings, so between that and the $750,000 for winning the team competition, it was a profitable weekend for him.

Live Golf Up Next

The final LIV Golf event of 2022 is the Miami Team Championship from Oct. 28-30 from Doral in Miami, Florida.

In the bracket, the top-four teams—led by the 4 Aces team of Dustin Johnson, Patrick Reed, Talor Gooch, and Pat Perez—have a bye on Day 1. Teams ranked fifth through 12th will play, and the winners will take on the top-four teams. The semifinals and finals will take place on Day 3.