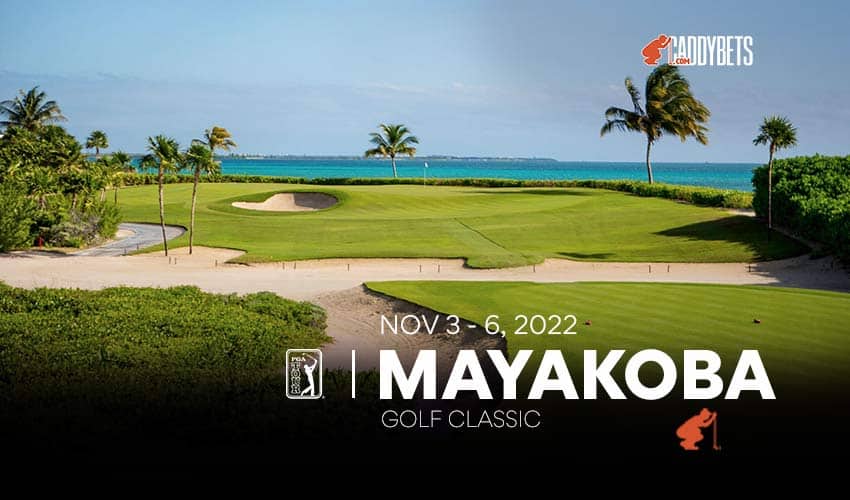 For the fifth-straight week, the PGA Tour plays in a different country than the week before. The itinerary went from Las Vegas to Japan, then to South Carolina, to Bermuda last week, and now to Mexico for the World Wide Technology Championship at Mayakoba in Playa del Carmen, Mexico.

Fred Funk won the inaugural event in 2007, and Viktor Hovland is the two-time defending champion. The Norwegian, who is the only multiple-time winner of this event, is looking to become the first golfer to threepeat on the PGA Tour since Steve Stricker won the John Deere Classic three times from 2009-11. Since then, 12 players have had the opportunity to threepeat but did not succeed.

A Mexican-born golfer hasn’t won at this event; Carlos Ortiz has come the closest, finishing runner-up twice (2019 and 2021).

El Camaleon Golf Club opened in 2006 and is a part of the Mayakoba resort. The course is a par-71, 7,017-yard track, so it is not long, but there are many perils within. There are oceanfront holes to deal with along with ones that feature jungles and even a cenote—a naturally formed pit with limestone walls. This is a feature of the seventh hole and is mostly covered in water, but there are areas where you can hit out of the sand.

Those who are more adept at accuracy off the tee tend to fare best here, which can favor veteran golfers. Hovland’s 23-under 261 last year set the tournament record.

Scottie Scheffler (+850), who lost the world’s No. 1 ranking to Rory McIlroy two weeks ago at The CJ Cup, has a chance to regain the top spot with a win here. Last year, Scheffler finished fourth just before he embarked on a hot streak that saw him win four times in six events. He hasn’t won since then, however, and is working out the kinks of a new putter. But since this is more of an accuracy and approach course, he may be able to hide his putting woes.

What more can be said about Viktor Hovland (+1100) here? In addition to back-to-back wins and a course record last year, he also has unlikely support. Many fans from his home country of Norway made the trek to Mexico last year to enjoy a vacation and cheer on their countryman, and expect more of the same this year. In addition to the two wins, he’s been solid this fall, coming in fifth at the BMW PGA Championship on the DP World Tour in September, fifth at the ZOZO Championship in Japan three weeks ago, and then a solid 21st at The CJ Cup before taking last week off.

It’s been almost a year since Collin Morikawa (+1400) last won a tournament, which was the DP World Tour Championship in Dubai last November. He was last in contention at the FedEx St. Jude Championship in August, where he finished fifth. Since then, his best finish in four starts is a 21st at the Tour Championship (in an event that had only 30 golfers). Not great form coupled with this being his first trip to Mayakoba leaves Morikawa overvalued here.

Billy Horschel (+1800) has a nice combination of good history here and great form as of late. The Memorial winner has two top 10s in his last four starts at Mayakoba and also has finished in the top 10 in his last three starts: a seventh at The CJ Cup in his only PGA Tour start of the 2022-23 season to go along with a 10th and ninth in two DP World Tour events over the past two months.

Tony Finau (+1600) hasn’t been seen on the PGA Tour this season but posted a 3-1-0 record at the Presidents Cup. When we last saw him on tour, he was on fire—winning back-to-back weeks in late July and then posting two top-10 finishes in the FedEx Cup playoffs. He has eight straight rounds under par here, which includes an eighth-place finish in 2020.

Aaron Wise (+2000) placed runner-up here in 2020, finishing one shot behind Hovland two years ago. He also placed sixth at The CJ Cup in his last start.

Tom Hoge (+2500) has been sniffing for a win so far this year, finishing in the top 15 in all four of his starts this season. He ranks sixth on the PGA Tour in Greens in Regulation, which is a key stat at El Camaleon, where Hoge placed third in 2020.

Seamus Power (+3300) tamed the winds in Bermuda for his second win on the PGA Tour, but he will face a stronger field this week. His added confidence, however, should be a plus on a course where he shot two 67s and two 68s a year ago on his way to an 11th-place finish in 2021.

Thomas Detry (+4500) is making the most of his first PGA Tour season so far, capping an early-season surge with a runner-up last week in Bermuda. He’s made the cut in all four events and has a ninth and a 12th to go along with his second-place finish from last week.

Emiliano Grillo (+3500) has four top-five finishes over his past 10 starts, including two runner-ups over the summer and two more top-fives in the past month. Grillo also has three top 10s and a 15th in five starts in this tournament.

Hovland won at +1500 last year, where he was also the second favorite (behind Justin Thomas in 2021). His value is good, considering that the other two favorites (Scheffler and Morikawa) arrive in not the best form. We like Finau and Horschel in the midrange and Detry as our longshot pick.