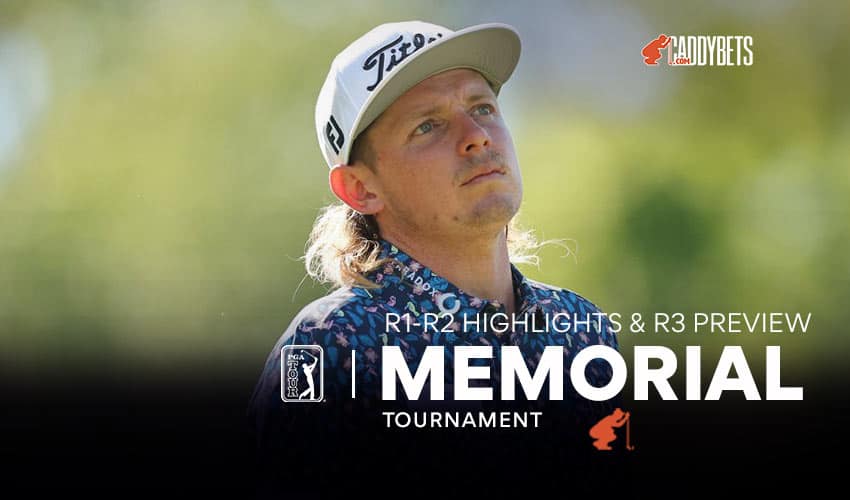 After two pulsating rounds of this year’s Memorial, it’s Australia’s Cam Smith who holds a narrow one-shot lead ahead of today’s third round. Here are our 2022 Memorial Round 1 & 2 Recap and Round 3 updated odds preview

In a tightly congested leaderboard, sixteen players will start their third-round within four shots of Smith. With big names such as Patrick Cantlay and John Rahm a further 5 and 6 shots back respectively, everything looks perfectly set up for a dramatic day of golf.

Despite being one of the most consistent players on Tour, Smith is in unchartered waters heading into the weekend.

This is Smith’s seventh appearance at the Memorial and he has only made the cut twice. It’s a sign of how well Smith has been playing that he leads the field having shot two rounds of 67 and 69.

Hot on Smith’s tail is the duo of Denny McCarthy and K.H. Lee. Both McCarthy and Lee will start the day one stroke behind. Two strokes back are a host of names which include Cameron Young, Billy Horschel, and Davis Riley.

It will be worth keeping an eye on Rory McIlroy who stands every chance heading into the weekend teeing off just three strokes behind Smith.

With the US Open now under two weeks away, players will be looking for some momentum as they head into one of the biggest tournaments of the year. Two players who won’t be around this weekend are Collin Morikawa and Bryson De Chambeau after both failed to make the cut. Things were even worse for Hideki Matsuyama who was disqualified midway through Round 1 due to him using a non-conforming club.

Despite Smith’s two-stroke lead, this tournament is far from over.

Favorite backers might be onto a good thing with Smith. Smith has two wins on Tour this season including the Players Championship so knows how to win and handle the pressure. His mixed Memorial record will give those behind the hope that they can catch the Australian, but odds of +275 still represents some value.

It isn’t a surprise to see Rory McIlroy next in the betting. The Northern Irishman seems to have found his consistency and will be expected to mount a late charge over the weekend.

A dark horse for the tournament could be Davis Riley. Riley finished in a tie for fourth at last week’s Charles Schwab and leads the field for the most amount of birdies. He could be the sleeper in the field with odds of +1200.

Another player to keep an eye on is Billy Horschel. Horschel is one of the Tour’s most improved players. He shot the lowest score in Round 2 and will be bringing lots of momentum into the weekend.

Last week saw Sam Burns overhaul a seven-stroke lead to win the Charles Schwab and world number two Jon Rahm starts today six back. Rahm will still believe he has a chance of winning this weekend and if the fiery Spaniard can get off to a good start odds of +3250 could look like a real steal.

Follow us on Social Media for 2022 Memorial & Official World Golf Ranking, and more!