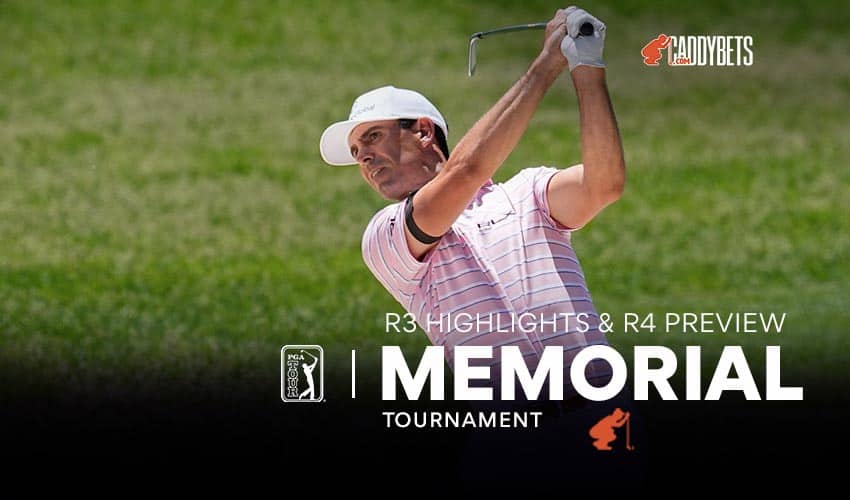 2022 Memorial Round 3 Recap and Round 4 Preview

Billy Horschel continued his fine form into the 2022 Memorial Round 3, shooting a bogey-free round of 65 to head into the final round of this year’s Memorial tournament with a 5-stroke lead.

As we flagged in Round 1 and 2 recap, Horschel has become one of the most consistent players on the PGA Tour. He has played on a different level to the rest of the competition and is -11 under for his last two rounds. He has now gone 53 holes without a bogey.

Heading into Round 3 the lead was held by world number three Cameron Smith. Smith put himself immediately on the back foot by opening his round with two consecutive bogeys. He showed his class to shoot one-under overall but the Australian will start today’s final round five strokes behind and has it all to do.

If it wasn’t for Horschel’s heroics, Daniel Berger might have found himself closer to the leaders. Berger shot the second-best round of the day with an impressive 67. Berger will start the day six shots off the lead.

A stroke further behind will be last year’s defending champion Patrick Cantlay. Cantlay had a good day shooting a 69 but missed several crucial putts. Cantlay is seven behind Horschel and surely has left himself with too much to do.

With a five-stroke lead, this tournament is Billy Horschel’s to lose. We flagged yesterday that Horschel could carry his round 2 form into round 3, and he did just that. Horschel has recorded just one bogey all week which came on his very first hole of the tournament. It would take something special to overhaul him at the top of the leaderboard and odds of -200 show what a strong position he is in.

Cameron Smith is next in the betting. The Australian will be in the group ahead of Horschel and want to apply some pressure. Despite being five strokes back, Smith will have the belief that he can still win. Key to Smith’s chances will be his putting. When hot, Smith is a lethal putter and he leads the entire PGA for putting averages. Odds of +550 still represent some value.

Aaron Wise +1000 has strung three impressive rounds together and gets his rewards by teeing off in today’s final pairing. Wise played some good golf yesterday recording just one bogey. He hasn’t won since the Byron Nelson back in 2018 and will be hoping that Horschel might feel the pressure and come back to the field. Wise ranks 14th for overall scoring on the front 9’s this season and will be hoping for a first start.

A dark horse for today’s final round could well be Cameron Young. Young has had a great year recording a trio of second-place finishes as well as a tie 3rd finish at the US PGA. Young starts today eight strokes behind but ranks 5th on Tour for 4th round scoring. If Young can start well odds of +5000 could be a really interesting bet.

Follow us on Social Media for the 2022 Memorial updates & Official World Golf Ranking, and more!