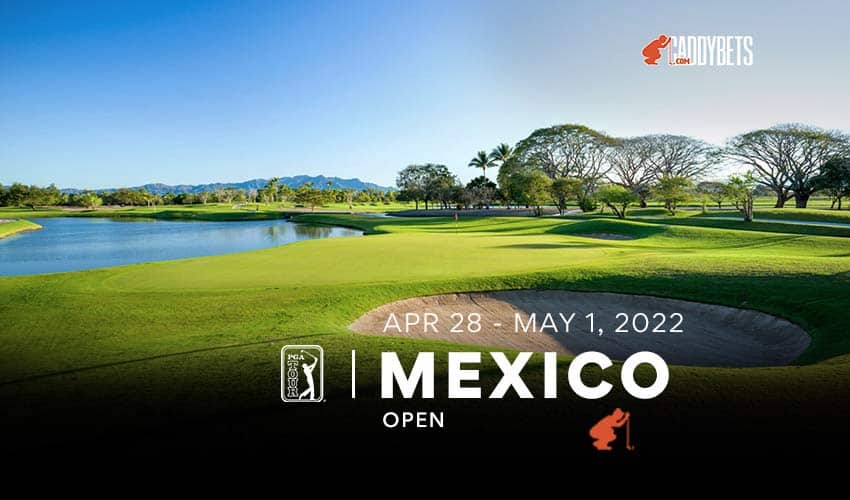 The Mexico Open has been contested nearly every year since 1944, but for the first time, it’s an official PGA Tour event. It was added to the schedule in January as part of a multi-year agreement, and the tournament will be contested at Vidanta Vallarta over the next three years. Here are our 2022 Mexico Open Odds, Prediction and Preview.

This event is considered the national championship in Mexico, and it has been won by the likes of Lee Trevino, Billy Casper, Ben Crenshaw, and Stewart Cink. In recent years, it has been a part of the PGA Tour Latinoamerica, and Alvaro Ortiz won last year at Estrella del Mar.

Vidanta Vallarta is a par-71 course that measures 7,456 yards. It’s a Greg Norman-designed course that opened in 2015, and 250 yards were added to the course from its original design in preparation of this event. In addition, the number of bunkers on the course was more than doubled, from 51 to 106.

The par 71 comes into play due to an extra par 3 hole, but four of the five par 3s have water in play. The course won’t play long either, as this course isn’t at a high elevation like so many others in the western part of Mexico. There are large landing areas off the tees here, but the addition of so many bunkers will require precision on the approach to the greens.

Jon Rahm is the only one of the world’s top-10 golfers in the field, and as such, he’s an overwhelming favorite to win at +500. Even though he hasn’t won this year and ceded the No. 1 ranking to Scottie Scheffler, Rahm still leads the PGA Tour in Shots Gained: Off the Tee and greens in regulation.

Rahm had two top-three finishes earlier in the year but hasn’t had a top 10 since the WM Phoenix Open in mid-February. He overcame a 77 in the third round of the Masters to finish tied for 27th after a 69 in the final round, so he’s well-rested heading into this event.

With a lack of course history due to this being an inaugural event on the tour, Rahm’s status as the No. 2 golfer in the world carries a lot of weight going into this event.

A contingent of 10 Mexican golfers will be teeing it up, led by Abraham Ancer (+1800), who is the second-highest ranked golfer in the field at No. 20. He reached the quarterfinals of the WGC-Dell Technologies Match Play event last month but didn’t make the cut at Augusta. Ancer, winner of the WGC-FedEx St. Jude Invitational last summer, did face the pressure of playing in his home country quite well in the fall, when he finished seventh at the World Wide Technology Championship at Mayakoba after shooting three 68s and then a 65 in the final round.

Two golfers—Tony Finau and Gary Woodland—are ahead of Ancer on the odds board at +1500. Woodland comes in somewhat under the radar due to missing the cut at The Masters and The Players Championship, but he has three top-10 finishes over the last two months, including back-to-back fifths at The Honda Classic and the Arnold Palmer Invitational. Finau is No. 25 in the world but has struggled mightily this season, sitting in 149th place in the FedEx Cup standings. He won The Northern Trust in last year’s playoffs, but his only top 10 this year was at the unofficial money event Hero World Challenge. The good news is that he’s steadied a bit by finishing 29th at the Valero Texas Open and 35th at the Masters.

Kevin Na comes in at +2000, and while he hasn’t had dazzling results as of late, he reached the knockout rounds at the Match Play, was 14th at Augusta and 26th at the RBC Heritage at Hilton Head, where he completed all eight rounds under par.

If Rahm doesn’t win this week, there’s a decent chance for a first-time winner, and that could easily be Cameron Tringale. He’s scattered some good finishes this year, including a runner-up at the ZOZO Championship, a third at the Farmers Insurance Open at Torrey Pines, and a seventh at the HP Enterprise Houston Open. He was 12th at Hilton Head two weeks ago and 10th at the Zurich Classic of New Orleans last week.

Charles Howell III (+5000) excels at Norman-designed courses, and he showed that earlier this month with a fourth-place finish at the Valero Texas Open at TPC San Antonio. The veteran led the field in that event in Shots Gained: Off the Tee and was among the leaders in greens in regulation as well.

Aaron Rai (+6000) is a rookie from England and is coming off a career-best fourth-place finish last week in New Orleans. He also came in sixth at Torrey Pines, and his first start in Mexico also went well, finishing 15th at Mayakoba back in November.

Sahith Theegala has cooled a bit since back-to-back solid runs in March that included a seventh at the Valspar Championship, but he came in third at the WM Phoenix Open, so he has the ability to contend here.

Finally, Carlos Ortiz, brother of 2021 Mexico Open winner Alvaro, has not had a great season, but one event does stand out. Fortunately for Ortiz, it was at the World Wide Technology Championship at Mayakoba, where he finished runner-up to Viktor Hovland in his home country, so expect Ortiz to play well here with national pride at stake.

This is a tough call because so many of the top performers on this PGA Tour season are not playing this week. Rahm won’t get you a big payday, but he’s the most talented golfer in the field by far. Ancer has some good value attached to him with the way he played the last time in Mexico, and we also like Woodland among the favorites. Howell III and Ortiz are our underdogs to back.

Here are the latest odds from JazzSports for the 2022 Mexico Open on the PGA Tour.