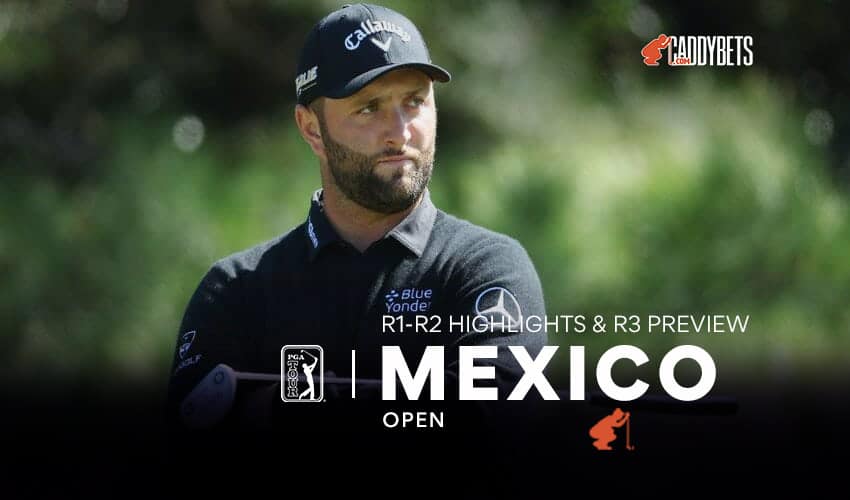 It’s crowded at the top. That is, the top of the leader board at the 2022 Mexico Open, where six golfers shot an opening-round 7-under 64 to share the lead. Tournament favorite Jon Rahm and six-time winner on the PGA Tour is joined by Brendon Todd, Trey Mullinax, Jonathan Byrd, Bryson Nimmer, and Kurt Kitayama.

Rahm got his round rolling by holing a greenside chip on the par-3 13th and then capped off his day in an equally impressive fashion with an eagle-2 on the par-4 7th, his 16th hole of the day. Rahm looks as if he has started to put it all back together, and if this continues, he will be pretty hard to beat this week.

In the week’s feel-good story so far, Bryson Nimmer, a name not many in the golfing world will know, sits tied with Jon Rahm for the lead after his first round at Vidanta. Nimmer gained entry into the tournament by earning medalist honors at the open qualifier, so let’s hope he can hang tight into the weekend and turn his Cinderella story into a victory.

The wind on Friday in round two of the 2022 Mexico Open didn’t seem to bother Jon Rahm, as he shot a 5-under 66 to jump to a two-shot lead heading into play this weekend. Rahm, the clear favorite at -120 odds, as projected by Jazsport.ag/*, made eight birdies giving him the two-shot lead over Alex Smalley at 13-under for the tournament.

Rahm birdied all four of the par 5s, including the 18th hole at Vallarta Vidanta with a 4-iron from light rough to just short of the green, a pitch to 6 feet, and one last putt.

Smalley, a Duke graduate in his rookie year on the PGA Tour, seems to play well on courses with grass-like these, as he was a runner-up in the Dominican Republic a month ago. Smalley kept himself in contention all day by giving himself honest looks at eagles, and he was able to capitalize on the par-4 third hole as he holed out from 165 yards.

He also had eagle chances on consecutive holes late in his round, two-putting from 35-feet on the par-5 sixth and driving the 291-yard seventh hole to 30 feet for another two-putt birdie. Smalley is currently sitting with +1400 odds, and is a name to keep an eye on as he battles Rahm into the weekend.

In a group at 9-under sits Patrick Reed, who ran off two late birdies and was poised to close out his round with a third in a row until an uninspired pitch from just short of the green on the par-5 18th. He had to settle for par and a 66, leaving him in a large group including Cameron Champ, Trey Mullinax, Adam Long, and Andrew Novak, who are all three shots behind.

Reed has been playing well, and at +1300 odds, he is someone to watch very closely this weekend. I expect him to battle with Rahm into Sunday, but ultimately I anticipate Rahm holding him off for his first victory in almost 11 months.

Join Us to receive your daily golf content! Make sure to stay tuned for the latest Golf Betting Odds.