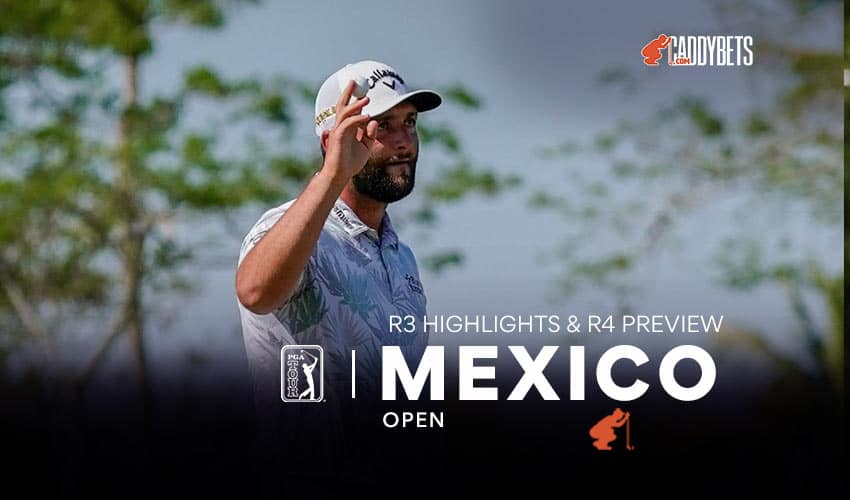 It’s tough to win a PGA Tour tournament, and it’s even tougher to win a tournament as the leader wire-to-wire, but that’s precisely what the World No. 2 Jon Rahm has done so far at the 2022 Mexico Open. Here is our 2022 Mexico Open Round Three Recap and Round Four Preview.

Rahm stands alone atop the leaderboard at 15-under and is looking to become the second consecutive wire-to-wire winner on the PGA Tour; Xander Schauffele and Patrick Cantlay did so last week at the Zurich Classic.

Based on his play on Saturday, it’s not a foregone conclusion that Rahm will be victorious here on Sunday. Yes, Rahm holds a two-stroke lead over Cameron Champ heading into play on Sunday, and yes, he is the heavy favorite at -150, as projected by JazzSports, but watching him play on Saturday, you could see him pushing a bit.

The previous two rounds were highlighted by his iron play, but that can’t be said for round three as he was 39th out of 74 players in strokes gained on approach. Rahm certainly didn’t play his best round on Saturday, with finding the water off the tee on the par-4 10th and missing a short birdie chance on the par-5 12th, but even after all of that, he was still atop of the leaderboard finishing the third round with a 3-under 68. If anyone was going to leapfrog Rahm, yesterday was the day to do it. If I were the rest of the field, I would be a bit worried that they had their opportunity and didn’t seize it. Look for Rahm to come back to form a bit on Sunday and close this tournament out.

Cameron Champ sits two strokes behind the leader at 13-under and has seen his odds to win move to +650, as projected by Jazzsports.

Champ is currently first in strokes gained off the tee and second in strokes gained putting, but his iron play must get better if he is going to truly challenge Rahm in the final round. Champ can crush the ball and has the distance to hang with anyone, but he is currently losing strokes on the approach, which is a stat we highlighted earlier in the week as a key to winning this tournament. If Champ had been a little more consistent over his final four holes yesterday, in which he finished 2-over, we might have been talking about Champ as the favorite to win on Sunday.

Patrick Reed, who looked like a strong candidate to be in contention in the final round, fell off a bit on Saturday. Now in a tie for 8th, and his odds moving to +5000, as projected by Jazzsports, Reed finds himself five back of Rahm and will need some assistance if he is to collect title No. 10 on the PGA Tour. After starting the day at three strokes off the pace at nine-under, Reed stalled with a round of 1-under 70 while those around him pushed up the leaderboard. The short game could only do so much for the 31-year-old on Saturday, as his ball-striking continues to be a problem.

The odds for the final round of the 2022 Mexico Open have been posted. Jon Rahm remains the favorite, as projected by JazzSports. In addition, all odds to win the tournament have been updated below:

Join Us to receive your daily golf content! Make sure to stay tuned for the latest Golf Vegas Odds.