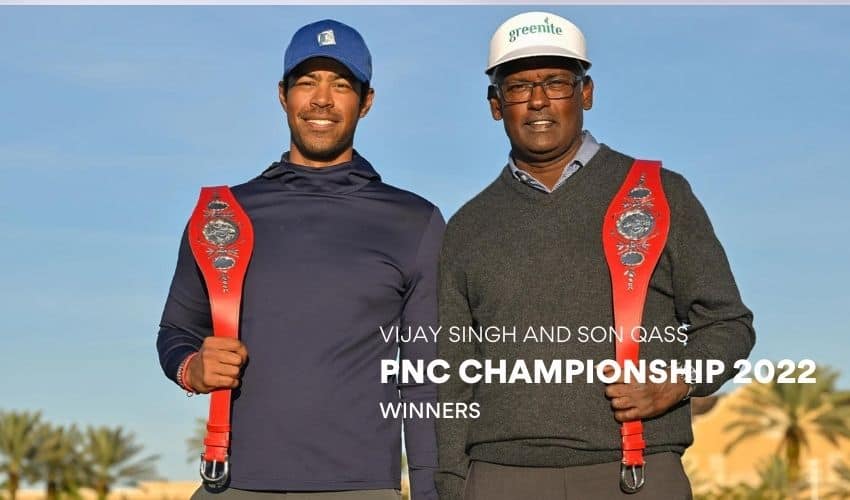 Vijay Singh has done just about everything in his pro golf career, including a Masters and PGA Championship win. But one thing that has eluded him the longest is a win in the 2022 PNC Championship, an event where he has teamed up with his son, Qass, for the better part of two decades now.

But after becoming the first duo to shoot under 60 in both rounds of this exhibition event, the Singhs won the PNC Championship on their 16th try, beating defending champion John Daly and John Daly II and 2020 champions Justin Thomas and father Mike by two strokes.

Team Singh’s 26-under was a tournament record, beating Daly’s mark by one stroke from 2021.
“This is a highlight of my career, winning with him,” Vijay, 59, said after the win. “Everybody said to come here and have a good time. I have fun too, but we all want to win.”

Qass, who works in the insurance industry, contributed with a couple of 2-iron shots that his father said were two of the best shots he’d seen in his career.

“This is already the best week,” Qass said, “so this is just making it just, you know, no words can describe. It’s going to be a memory I’m going to have forever.

“Way too long, but it’s about time, so I’m thrilled. I’m so happy.”
One of Qass’s shots came right after Daly II sank an eagle putt to get to -24 after 15 holes, so the Singh needed to respond in that moment, and the competition did not get any closer after that.

After finishing runner-up to the Dalys last year, Tiger Woods and his 13-year-old son Charlie finished eighth this year after a 65 on Sunday. They started the day two shots behind Team Thomas after a 59 in the opening round, but they could not recapture the magic on Sunday.

The elder Woods has been dealing with injuries to his foot since a February 2021 car crash that left his left leg mangled. Despite struggling on Sunday, both father and son appreciated the time spent together in this event.

“I feel like I already knew what he was capable of,” Charlie said, “and then yesterday, that’s the best he’s ever played in a while and that kind of shocked me a little bit. That’s really it.”

Tiger added, in self-deprecating fashion, “I used to be good, [but] it was neat to be able to roll back the clock for him to see what I used to be capable of.”

We’ll probably see Woods next at Augusta for the Masters, but expect he and Charlie to be a fixture at this year-ending event for years to come.

Golf takes a two-week break for the Christmas and New Year’s holidays. The 2023 portion of the FedEx Cup schedule begins on Jan. 5 with the Sentry Tournament of Champions in Hawaii. The event features the winners from the past year on the PGA Tour, including Xander Schauffele, Jordan Spieth, and Justin Thomas. Defending champion Cameron Smith will not be taking part, however, as he is ineligible as a member of LIV Golf.

Follow us on Social Media for more 2022 PNC Championship updates!