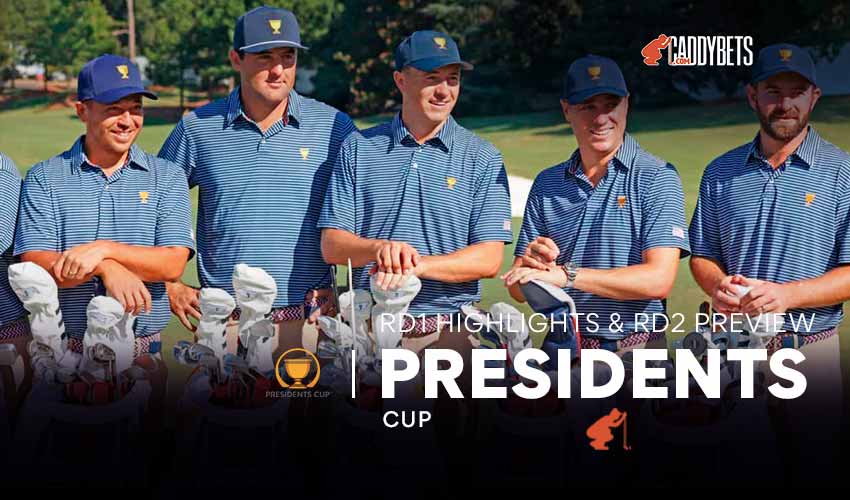 This 2022 Presidents Cup teed off yesterday at the iconic Quail Hollow Golf Club. The bi-annual event see’s 12 of the best American golfers take on 12 international golfers.

The run up to this year’s event has been overshadowed with many of the International teams top stars such as Cameron Smith and Louis Oosthuizen ineligible to play due to their involvement in the breakaway LIV tour. This has left Trevor Immelman’s International side as the heavy underdogs, with many believing that anything other than an American win would be amongst the greatest upsets in sporting history.

The event is being played between Thursday and Sunday with the first day consisting of five foursome matches. The first team that achieves 15.5 points will be victorious. America have only lost on one occasion and are the defending champions.

The first match of the day saw Patrick Cantlay and Xander Schaufelle take on Team International’s most experienced duo of Hideki Matsuyama and Adam Scott.

Trevor Immelman would have hoped that two of his best players could have ignited his side’s momentum but he would ultimately end up disappointed.

Cantlay and Schaufelle have already demonstrated at last year’s Ryder Cup that they are not a team to be messed with and they showed all of their class romping to an easy 6&5 win.

With America on the board, their points tally was doubled when Justin Thomas and Jordan Spieth combined efficiently to beat the solid pair of Sung Jae Im and Corey Connors 2&1.

Many believe that even with the absence of several big names such as Dustin Johnson and Bryson De Chambeau, this is the strongest American side ever assembled and with incredible talents like Cameron Young and Collin Morikawa it’s easy to see why. The American rookies showed no signs of nerves as they battled hard to edge the duo of Kim and Lee 2&1.

With the whitewash looking on, Team International were boosted by a stunning turnaround from Si Woo Kim and Cameron Davis. Staring defeat in the face after sitting 2 down after 14 holes, the International pair produced some stunning golf over the last four holes  to beat Scottie Scheffler and Sam Burns 2 Up.

With that breathing life into the International side, the final match of the session would be pivotal.

With all four players playing well, the decisive moments of the match went the way of the Americans with the pair of Tony Finau and Max Homa just doing enough to hold off the challenge of Taylor Pendrith and Mito Pereria, winning by a single hole.

Despite the scoreline being 4-1 to the Americans, the Internationals showed they will certainly make the home team work hard for every point. However, if they are to stand any chance they will need to come out firing today.

With foursomes being the order of the day yesterday, attentions turn to todays fourballs. The day will consist of five matches with each match being worth 1 point.

Once again the Internationals look to have their work cut out against this loaded American side and it wouldn’t be a surprise to see America sweep all five matches.

One match to keep an eye on could be matched 4. Hideki Matsuyama and Kim Joo-Hyung can score proficiently and although they are playing against the fearsome pair of Cantlay and Schaufelle they might just have an outside chance of victory.