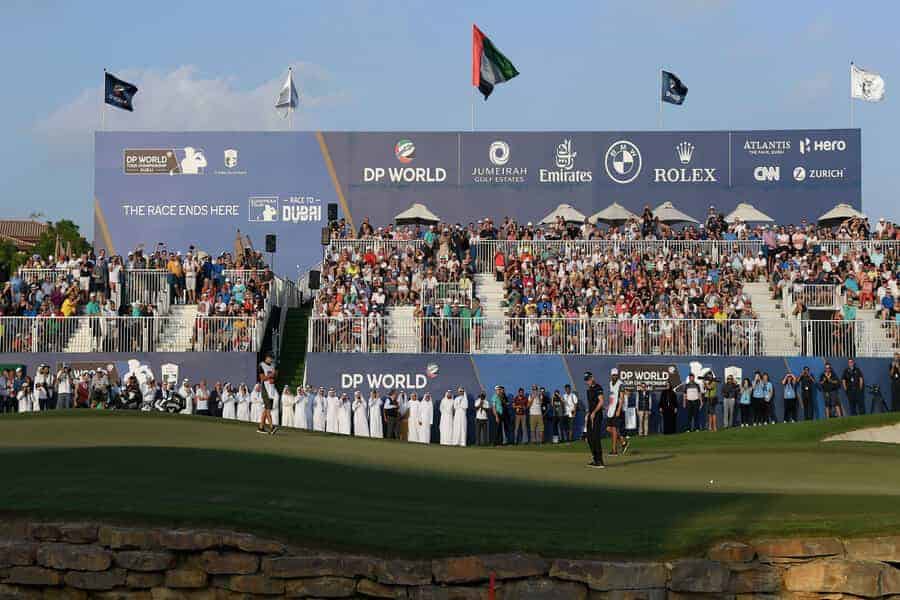 The European Tour has rebranded. It’s now known as the DP World Tour, which is a far more accurate name in reality, as the series conducts many of its events outside of European borders, including the season-ending DP World Tour Championship in Dubai each November. Check the 2022 Race to Dubai odds

The new sponsorship will mean richer prize funds for nearly all events on the tour, including the season finale, which will become the first event in Tour history to have a purse of $10 million.

The Race to Dubai began in 2009 as a season-long point standings on the European Tour that led to golfers qualifying for the finale in Dubai and also able to win bonus money for finishing in the top five of the Race to Dubai standings.

In 2021, Collin Morikawa—on the strength of his Open Championship and WGC event wins—won the Race to Dubai after winning the DP World Tour Championship, becoming the first American to do both.

Looking at the Schedule in 2022

The Race to Dubai begins in the United Arab Emirates with two events in January. The Tour then moves through the Middle East into India and then South Africa before sanctioning two events in the United States—the WGC Match Play and the U.S. Masters. The other three majors and the WGC-HSBC Champions event in China are also a part of the DP World Tour, along with two other PGA Tour events as part of a new strategic alliance between the two tours. The season ends with the DP World Tour Championship in Dubai from Nov. 17-20.

WGC and Rolex Series events, such as the BMW PGA Championship and Genesis Scottish Open, pay 8,000 Race to Dubai points while the four majors pay 10,000, so golfers who win those will have a leg up on the competition when it comes to qualifying for the finale in Dubai and putting themselves in position to get into the top five at the end of the season.

Let’s take a look at some of the top contenders for 2022 Race to Dubai.

are the three favorites. Rahm is the world’s No. 1-ranked golfer but hasn’t played since October. He returns to the PGA Tour’s Sentry Tournament of Champions the first weekend of January, so we will know more about his game then. But Rahm is the defending U.S. Open champion and was leading the 2022 Race to Dubai standings before his sabbatical after the Andalucia Masters.

Morikawa won both the PGA Championship and Open Championship in his first attempt, plus he won a WGC event in 2021, which put him in great position to win the Race to Dubai, which he did in emphatic fashion by winning the DP World Tour Championship.

Rory McIlroy, however, was leading that event going into the final round, and while he wasn’t in contention to win the season-long title, there are indications that he has rediscovered his game from when he was ranked No. 1 in the world before the sport shut down for several months in March 2020 at the onset of the COVID-19 pandemic. McIlroy will be a contender at any event he plays this year, and the native Northern Irishman tends to play more in Europe than the other top contenders, and a win in a major will push him toward the top of the standings.

Is by himself in the second tier of candidates at +900. The 25-year-old Norwegian is shaping up to have a very strong 2022 after winning a PGA Tour event in Mexico in November and following it up by winning the Hero World Challenge, an unofficial money event that was held in Bermuda in early December against an all-star field of contenders, including McIlroy and Morikawa.

Earlier in 2021, Hovland scored his first European Tour win at the BMW International Open in June, was 12th at The Open, and scored a runner-up finish at February’s WGC-Workday Championship at The Concession, which was won by Morikawa. Hovland is likely to spend more time on the PGA Tour this year, but strong finishes in majors and WGC events, along with the Rolex Series events that he will likely still take part in, could keep him high in the standings despite playing in a lot of tournaments.

A trio of Englishmen are next—Tyrrell Hatton, Matthew Fitzpatrick, and Tommy Fleetwood. Hatton (+1800) is a two-time winner of the Alfred Dunhill Links Championship in 2016 and ’17, along with a runner-up finish last year. That’s important because the Old Course at St. Andrew’s is a part of that event, and The Open Championship is at St. Andrew’s this year to celebrate the 150th edition of that event. }

Hatton also won the Abu Dhabi HSBC Championship in January 2021 and the BMW PGA Championship in the fall of 2020, so he’s no stranger to big wins. Hatton plays the four majors but primarily plays on the DP World Tour, so expect him to rack up enough points—along with a win or two—to put himself in contention come November.

Fitzpatrick nearly won the DP World Tour Championship in 2021, finishing tied for runner up to Morikawa, and he also won that event in 2016 and 2020, making him an instant contender for the Race to Dubai title. Fitzpatrick has also won the Omega European Masters twice and represented Europe on two Ryder Cup teams (2018, 2020).

Fleetwood won the Race to Dubai in 2017 in a year that he had 10 top-10 finishes, including a fourth at the U.S. Open. He will need to get back into winning mode, however, if he wants to contend this year, as his last victory came in the Nedbank Golf Challenge in 2019. He’s a two-time winner of the Abu Dhabi HSBC Championship, so keep an eye on his performance there in January to see if he can get off to a good start in the season-long race.

Sign up and make sure to stay tuned for 2022 Race to Dubai updates, latest PGA news, Golf Betting Odds and PGA Tour schedule