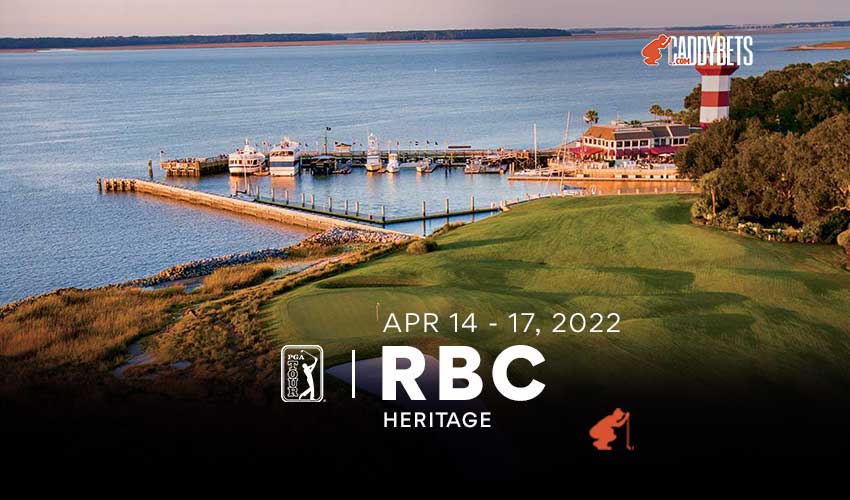 Despite being on Easter weekend and a week after the Masters, five of the world’s top-10 players are making the short trip to Hilton Head Island, South Carolina for the RBC Heritage at Harbour Town Golf Links on the coastline.

The event has typically been held the week after the Masters since 1983 with the lone exception of 2020 when the tournament was played in June due to the COVID-19 pandemic.

Stewart Cink is the defending champion, as the 48-year-old won for the third time here after winning in 2000 and ’04. Cink and Hale Irwin have each won this tournament three times, and Davis Love III holds the record with five.

The course was an early design of Pete Dye (with input from Jack Nicklaus) and opened in 1969, in time for the inaugural Heritage Golf Classic, which was won by Arnold Palmer. It features small greens and tree-lined fairways, so accuracy is key on the par-71, 7,121-yard course.

What makes or breaks most golfers are the four par-3 holes that all feature water. The 14th (192 yards) and fourth (200 yards) were the toughest two holes in last year’s tournament, accounting for a combined 57 double bogeys or worse over the course of the event.

Can Thomas or Morikawa Get First Wins of the Season?

Justin Thomas was a favorite at the Masters, but a first-round 76 set him too far back before recovering to finish tied for eighth. Collin Morikawa shot a 67 in the final round to climb to fifth, but two of his first three rounds were over par, so the 2021 Open Championship winner didn’t contend either.

Thomas last played here in 2020, where he finished eighth. He has top-10s in four of his last five-stroke play events and leads the PGA Tour in fairway proximity, which is a good start to have at Harbour Town.

Morikawa was second to Cink going into the final round of last year’s event but faltered a bit to finish seventh. While he hasn’t won in the current PGA Tour season, Morikawa has quietly put together five top-5 finishes in eight tournaments.

Cameron Smith (+1400) is the other favorite, and unlike Thomas and Morikawa, he has won on tour this year—twice, in fact. Smith won the Sentry Tournament of Champions and The Players Championship, and he was in contention at the Masters all weekend, where he finished tied for third. He had a ninth-place finish in this event last year and started off extremely strong with a 9-under 62, so with the way Smith is hitting the ball, this could be another strong performance for him.

Dustin Johnson (+1800) has been playing solid golf but has yet to break through this season. He started the Masters with a 69 but didn’t shoot under par again on his way to a 12th-place finish. Johnson led here going into the final round in 2019 but shot a disappointing 77 to give away the win. He has, however, finished in the top 20 in three of his last four events here.

Patrick Cantlay (+1700) has struggled a bit after losing a playoff to Scottie Scheffler two months ago at the WM Phoenix Open, but he comes to Harbour Town having finished in the top five in 2019 and ’20 before missing the cut a year ago.

Shane Lowry (+2000) has top 10s here in two of the last three events as well, and he’s playing some of the best golf of his career. The 2019 Open Championship winner was third at the Masters and finished runner-up at the Honda Classic at the end of February. Sandwiched between those two results was a 13th at The Players Championship and a 12th at the Valspar Championship.

Matthew Fitzpatrick (+1800) has made the cut here four consecutive times and has a fourth-place effort to go along with two finishes of 14th, and Corey Conners (+2500) had his usual solid performance at Augusta, logging a top-10 for the third-straight year. He also finished fourth at Harbour Town last year.

Webb Simpson (+2800), the course record-holder here, had a good first three days at the Masters before a 76 on Sunday sent him to a 35th-place finish, but he’s a consistent performer here and says he’s back at full health after missing two months prior to the Players Championship. To go along with his win in 2020, he’s also been runner-up here among eight top-20 finishes.

Kevin Na (+6000) finished 14th at the Masters last week despite firing a 79 in the third round, so his weekend was mostly solid. While he had a rough start to the year, Na did reach the knockout round of the WGC-Match Play event, was a co-winner of the unofficial money event QBE Shootout, and tied for the lowest 72-hole score at the Tour Championship last August. The veteran has also posted five top-10 finishes in this event.

After missing out on the Masters, Maverick McNealy (+5000) is fresh and motivated to qualify for next year’s gathering at Augusta. The 26-year-old has made the cut in 12-straight events, was seventh against a quality field at the Genesis Invitational and finished runner-up at the Fortinet Championship. After the season started with several first-time winners, higher-ranked golfers started winning tournaments (mostly Scottie Scheffler). We could be due for another first-time champ, and McNealy fits the profile.

Thomas feels like he’s ready to not only win but to go on a Scheffler-like hot streak, and that could start this weekend. We also like Smith, Lowry, Simpson, and McNealy to round out our card.

Here are the latest odds from JazzSports for the 2022 RBC Heritage on the PGA Tour.