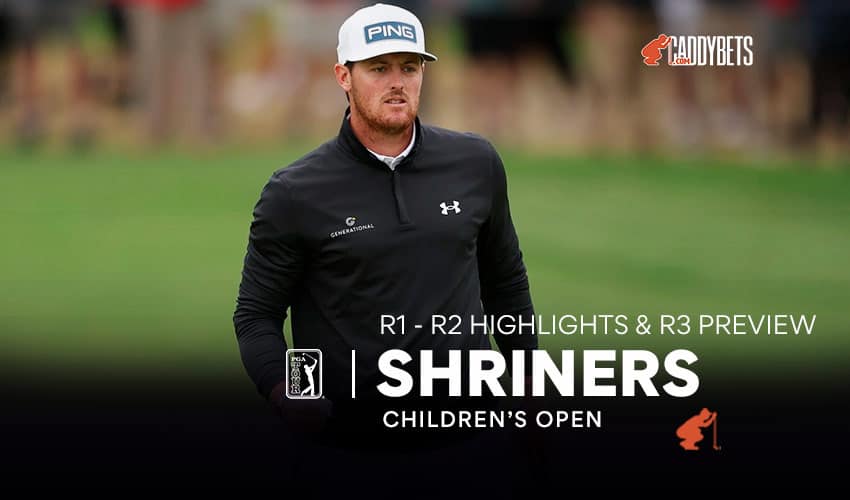 There is an international flavor to the top of the leaderboard halfway through this 2022 Shriners Children’s Open as Chilean Mito Pereria leads the way on -12.

Hot on the Chilean tail is American Robby Shelton who will start day one behind. A trio of players is two off the pace and these include Maverick McNealy and two of Pereria’s Presidents Cup teammates Si-Woo Kim and Tom Kim.

In total 25 players will start the day within five strokes of the lead and this is a tournament that is still wide open.

Pereira shoots the round of the day to lead by one

After a solid opening round of 67, Mito Pereira fired himself to the top of the Shriners leaderboard with a stunning second round 63. Pereira would only drop one shot in the entire day and opened his second round with four birdies in his first six holes.

A mighty striker of the ball, Pereria seems to have his short game dialed in, and when in this form he has the game to succeed. Pereira was unlucky not to have won his first Major last season and he will be hoping to put his run at last year’s US PGA into good effect here.

Sharing round of the day honors with Pereira is little-known American Robby Shelton. A former golfer at Alabama, it’s clear that Shelton has a special game. Showing an excellent display of ball striking, Shelton kept his card bogey-free and he will be looking to record his first-ever top-ten PGA finish here.

Tom Kim cemented his superstar status at the Presidents Cup and the 20-year-old Korean star looks primed to win his first PGA Tour title this weekend. Yet to drop a shot through his first two rounds, Kim left vital shots out on the course yesterday to head into today’s third round two off the pace. He will be frustrated not to be in the lead but is still bang in contention.

Si Woo Kim had one of the most eventful rounds of the day as he produced a battling 68 to remain firmly in the title hunt. Leading the tournament, things unraveled for the South Korean with a triple bogey on the twelfth hole. However, he clawed two of those shots back when he holed his approach on the 15th and secured parity with a birdie on the 16th. Kim will need to be more consistent if he is to keep in touch with the leaders today.

With the tournament being so wide open there really is value everywhere you look.

Mito Pereira will rightly start today’s third round as the favorite and if his short game and wedge game are in as good working order as the first two days he could be a tough man to peg back.

Tom Kim looks destined to be one of the leading lights in the sport for years to come and his meteoric rise up the rankings looks to show no signs of slowing. Kim will be a danger to all and his current price of +600 could look vastly overpriced if he can produce his very best golf today.

Patrick Cantlay spoilt his second round with two uncharacteristic bogeys. He will start the day four behind but is currently the third favorite for victory. Cantlay knows how to win these events and is a rock-solid option at +750.

Max Homa has already won this year and like Patrick Cantlay will start the day just four back. Arguably playing the best golf of his life,  odds of +1800 look really appealing and he could be the value option of the day.

Sung Jae Im is a shot further behind Homa and currently can be backed at odds of +2000. Im can be a complete birdie machine and if he can get the putter hot, look for the South Korean to make his charge today.