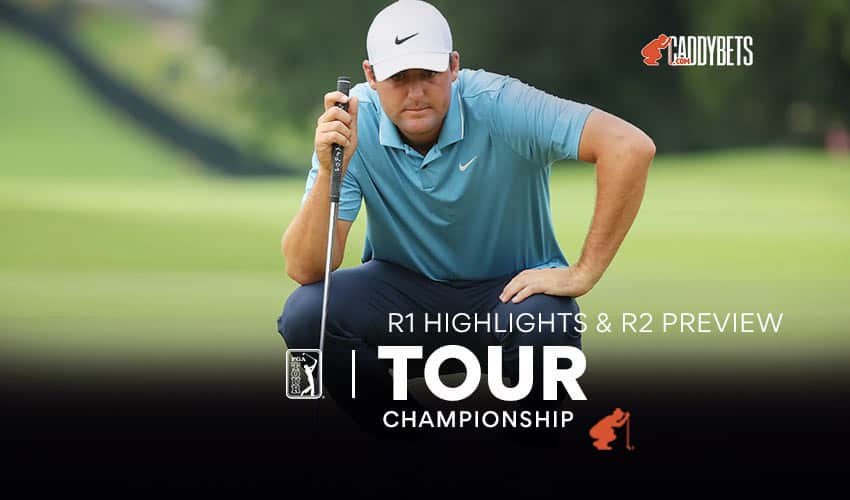 2022 Tour Championship Round 1 Recap & Round 2 Preview

To those new to the event, the Tour Championship Final is a 30-man event, reserved for the top 30 players in the season-long FedEx Cup rankings.

It’s a tournament with a twist, there is no cut and the players start with shots already assigned before a ball is struck.

Topping the rankings was Scottie Scheffler and he started at -10 whereas Adam Scott who just snuck into the final 30, started at even par a whole ten strokes behind.

With all the focus on Scheffler, he is looking to cap off a great year by combining the FedEx with his Masters title and he made sure that pressure didn’t tell by shooting three consecutive birdies in his final three holes to lead the tournament by 5.

In second place is Xander Schaufelle who shot a solid -4, 66. More of the same is needed if he is to eat into Scheffler’s lead over the next three rounds.

Despite the staggering scoring, several players made good starts to put themselves in prime positions to win this prestigious event.

The round of the day belonged to Matt Fitzpatrick and Joaquin Niemann who both shot -6, 64s to fire themselves into the top 5 of the tournament. Both now sit at -9 and -8 respectively. Special mentions must be given to Aaron Wise and JT Poston who shot -5s 65s, but both still have plenty to do as they sit ten behind Scheffler.

All odds courtesy of JazzSports

Unsurprisingly Scheffler is the heavy favorite to win it all come Sunday night. -140 is still a very attractive price considering he holds a five-stroke lead. With only 54 holes remaining he is very much the man to beat.

Xander Schaufelle stands alone in second place in the betting and can be backed by +550. He has arguably been the form player on Tour over the last few months and he won’t hold any fears of the five-stroke deficit he currently faces.

Matt Fitzpatrick finally got the monkey off his back by not only winning his first title but also his first major. Fitzpatrick has such a calm temperament and is another who won’t be phased by the six-shot deficit he faces. At +1200 he could be the value play of the day.

Rory McIlroy had a rollercoaster of a round yesterday, starting his round off with a triple bogey. He battled back superbly to end the day level. McIlroy has shown us countless times that he can go on a birdie blitz and he can’t be discounted at +1400.

Patrick Cantlay was the winner of the FedEx last season and he would love to be the first back-to-back winner. Cantlay starts the day seven strokes off the pace but does enter today’s round with some serious momentum following an eagle on his 18th hole yesterday. +1600 could be a very attractive price.

Follow us on Social Media for more 2022 Tour Championship Round 1 updates & check the Official World Golf Ranking, and more!