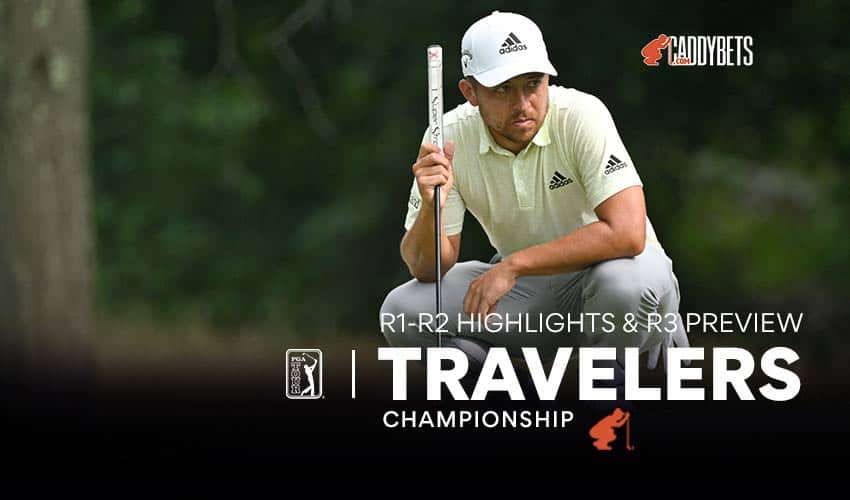 Amid another dramatic week in the world of golf, all eyes headed to Connecticut for the 2022 Travelers Championship. A mainstay on the PGA Tour, the competitive field was headlined by some of the very best names in golf.

Traditionally the Travelers can yield low scores and it wasn’t a surprise that after round 1, a group of players headlined by Rory McIlroy had already reached -8. It’s well expected that a score in the -20s is what will be needed to win this famous tournament and Xander Schaufelle took a huge step towards that target after a stunning second-round performance.

The American leads by five heading into today’s third round, leading the way on -14 after two consecutive 63s. Schaufelle has played near-perfect golf, recording 14 birdies without dropping a single shot. Showing complete control of his game from tee to green he will be a tricky man to catch over the weekend.

Round 1 leader Rory McIlroy had one of the most eventful rounds of his career shooting an even-par 70 which included seven birdies, one double bogey, and one quadruple bogey. The quadruple-bogey which came on the 12th was only the 6th of his career. McIlroy will start the day six strokes behind.

Clustered in a group five shots behind Schaufelle are Patrick Cantlay, Harris English, Cam Davis, and Kevin Kisner. English could be the one to look out for. The defending champion this week, it’s a tournament he thrives in and he will be looking to be the tournament’s first back-to-back champion since Phil Mickelson back in 2000 – 2001.

With 36 holes left in this year’s Travelers, Xander Schaufelle is the clear favorite at -130. For favorite backers that still reflect a decent price and with the American looking in superb form, it will take something to special overhaul him.

With Schaufelle’s odds so short there is value everywhere you look. Defending champion Harris English will start day five shots behind and knows this course and layout well. Odds of +2800 could be one of the better value plays.

Outside of the majors, Patrick Cantlay has enjoyed a consistent time of things finishing inside the top 5 in two of his last four starts. The world number 6 knows how to mount a charge and he could be one of Schaufelle’s main dangers. Odds of +850 look appealing especially if Cantlay can get off to a hot start.

Rory McIlroy is perhaps the unknown quantity heading into the weekend. McIlroy admitted before the first round that he had been feeling the effects of contending over the last three weeks and his performance in yesterday’s second round showed that. Odds of +900 could be a steal if McIlroy can avoid the errors but does come with some risk.