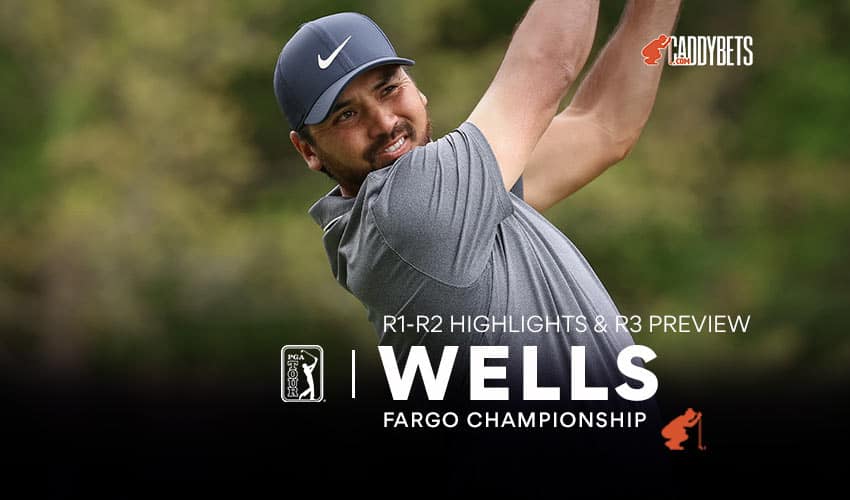 It’s a New Day at the 2022 Wells Fargo Championship. Sorry about the pun; I couldn’t help myself because Jason Day looks to be in control heading into a rain-filled weekend at the TPC Potomac.

Day’s second round of 3-under 67 was almost as impressive as his near record-setting 7-under 63 on Thursday. Day’s swing has been terrific, as he has rarely missed a shot. The former world No. 1 gained more than five strokes on the field and is in control heading into what should be an exciting weekend of golf.

Day has not raised a trophy since his 2018 Wells Fargo Championship triumph, so a win this week is long over-due for the Australian. However, with a not-so-favorable weather forecast projected for the weekend, Day will need to stay consistent as the field gets set to chase him down.

Scores came back to earth a bit on Friday as the weather changed and hammered the players a heavy dose of rain. Scoring averages dropped to three over for the Day, but there were a group of golfers that went out early and shot a 4-under 66, which included Chad Ramey, Luke List, and Max Homa. Homa looks ready to chase down Day heading into play this weekend as he sits three strokes behind Day at 7-under for the tournament.

List sits right behind Homa in a group of four golfers at 6-under, and Ramey still sits within striking distance at 5-under; with my pick from earlier in the week, Keegan Bradley also bucked the trend of bad play, as he jumped up the leaderboard with a 5-under 65.

Heading into play on Saturday, the favorite is the current leader Jason Day at +150, but with a three-stroke lead and two rounds to play, you would think his odds might be better. However, Day hasn’t won in a while, so I guess there is some hesitation on whether he can hold onto this lead and close out the tournament, so the oddsmakers have Max Homa right behind Day at +550 odds. These two golfers are clearly the favorites heading into the weekend, but it won’t be as comfortable as the odds might suggest with a hard-charging field behind them.

Maryland native Denny McCarthy sits right behind the favorites at +1400, and has put himself in a position to be in striking distance at 5-under. Sitting with McCarthy at 5-under is my pick from earlier in the week Keegan Bradley, who also sits right behind McCarthy with +1600 odds to win it all. If you are not a believer in Day’s ability to hold on, then Bradley at +1600 is an exciting play this weekend. His game is well suited for this course, and the conditions should not affect him.

Defending champion and the favorite heading into the tournament, Rory Mcllroy, has seen his odds plummet to +6600, as he currently sits at even par heading into the weekend. We’ve seen some great rounds from Mcllroy in the past, including his final round at The Masters, but a lot would have to go right in order for him to get back into contention, and the odds are just not with him at this point.