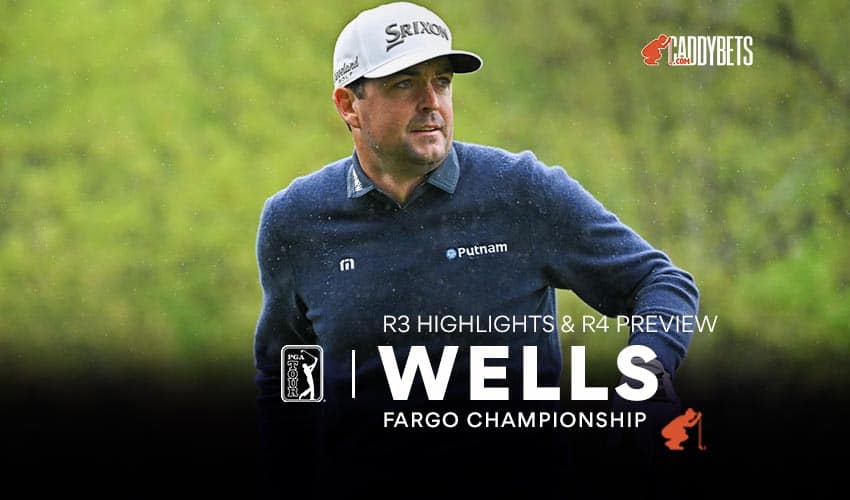 Jason Day, who looked brilliant in his first two rounds, watched his lead fade away early, as he lost nine strokes to shoot a 79 and finish the day at 1-under for the tournament.

The round of the day belongs to Keegan Bradley, who, even in these sloppy conditions, was able to fire a 3-under 67 to push him to the top of the leader board at 8-under, giving him a two-stroke lead over Max Homa heading into his final round on Sunday. As most golfers struggled, Keegan played his first nine at even par and then turned it up a notch as he shot a 32 on his final nine of the day. Bradley is not known for his putting, but his putter has been flawless this week, allowing him to remain in contention through his first two rounds and then jump to the top of the leader board on Saturday.

I had Rory Mcllroy buried after his first two rounds, but the defending champion put together the second-best round of the day with a 2-under 68, which put him right back in the conversation. Mcllroy sits six strokes back of Bradley heading into Sunday, but we have seen Mcllroy surge before, and I have no doubt he will be in contention come Sunday evening.

Watching Jason Day tumble off the leader board on Saturday was rough, and with that, his odds to win the 2022 Wells Fargo Championship tumbled to +7500, as projected by Jazzsports. It would be hard to imagine him having enough left to hoist the trophy come Sunday, especially when the golfers he is chasing have played so well.

The golfer everyone is chasing is Keegan Bradley, who is the current favorite heading into Sunday at +120, as projected by Jazzsports. I liked Bradley from the beginning, and I’m sticking with him on Sunday as he goes for his fifth win on the PGA Tour. The one thing about his game that worried me was his putting, but he has seemed to figure that out this week, and if that continues, he should be hoisting the trophy come Sunday evening.

The odds for the final round of the 2022 Wells Fargo Championship have been updated. Keegan Bradley has been inserted as the favorite, as projected by Jazzsports. In addition, all odds of winning the tournament have been updated below: