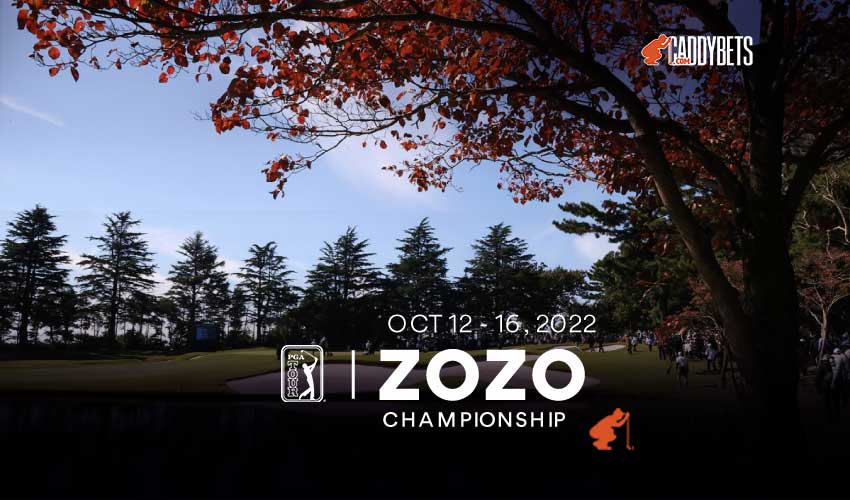 The home-country defending champion, two South Korean stars, and two Americans with Japanese heritage lead the field at this 2022 ZOZO Championship, the first international stop on the PGA Tour for the 2022-23 season.

The event, which is co-sanctioned by the Japan Golf Tour, is in its fourth year, but the 2020 event was held in the United States due to the COVID-19 pandemic. Tiger Woods won the inaugural event in 2019 in what could turn out to be his 82nd and final PGA Tour victory, and Hideki Matsuyama won last year on home soil after finishing runner-up to Woods two years’ prior.

Narashino Country Club is located in Inzai, which is about an hour away from Japan’s capital of Tokyo. Despite the ZOZO Championship being a recent event, the course does have a rich history. International stars like Gary Player and Seve Ballesteros won at Narashino in the now-defunct Suntory Open, which was held from 1974-1997.

The course itself is a par-70, 7,079-yard track. After only having to deal with two par-5 holes over the first 17, Narashino finishes with a long 593-yard par 5. Courses in Japan also have two greens on each hole in order to accommodate the changing climate. In 2019 and ’21, one hole each used both greens due to weather conditions.

Who won a gold medal at the Tokyo Olympics in 2021 and has family in Japan, is the narrow favorite over native son Hideki Matsuyama (+1200).

Xander Schauffele went 3-1-0 at the Presidents Cup last month and will be making his season debut here. He was on a roll over the summer when he won back-to-back events and closed out the FedEx Cup playoffs with a third at the BMW Championship and a fourth at the Tour Championship. Schauffele was 28th here last year but did fire back-to-back 68s in the final two rounds after a rough start.

Matsuyama has only been beaten by the legendary Woods here, so the rest of the field has its work cut out for them. The 2021 Masters champion has been up and down as of late, last logging a top-five at the U.S. Open, where he finished fourth. He dealt with an injury at the start of the FedEx Cup playoffs but rebounded to finish 11th at the Tour Championship. He closed with a 65 to finish 25th at the Fortinet Championship in his only PGA Tour start of this season.

Also at +1200 is South Korean Sungjae Im, who is coming off a top-10 finish at the Shriners Children’s Open last week in Las Vegas. He hasn’t won since winning the Shriners in 2021, but he’s done everything else as of late, including three runner-up finishes since July. He skipped this event a year ago but was third behind Woods and Matsuyama in 2019.

Im’s countryman Tom Kim (+1400) is also playing this week after out-dueling Patrick Cantlay to win in Las Vegas last week. It was the 20-year-old’s second PGA Tour win in just 18 starts. Dating back to his first top-10 of his career at the Genesis Scottish Open in July, Kim has two wins and four top-10 finishes in eight starts. He has no history at Narashino, but that didn’t stop him last week at TPC Southwind or at Sedgefield at the Wyndham Championship, where he won both events in his first try on those courses.

Has just played in the Presidents Cup (2-1-0) since the Tour Championship after a winless 2021-22 campaign. The American with Japanese heritage was seventh here last year, improving upon a 22nd in 2019. In his last seven events of last year, Morikawa has two fifth-place efforts but also missed three cuts, so we’d like to see what he can offer this year before we go all-in on the young star.

Viktor Hovland had a win and four top-10s after The Players Championship in March but only finished in the top 10 once after that (fourth at the Open Championship). He makes his season debut this week after regaining some confidence with a fifth at the BMW PGA Championship on the DP World Tour last month, but like Collin Morikawa, we need to see some of last fall and winter’s form before we back the Norwegian.

Comes into this event as the reigning PGA Tour Rookie of the Year and seven podium finishes last year. He’s in the position Scottie Scheffler and Will Zalatoris were last year—most likely to pick up his first PGA Tour win. It worked out for both of them, so it’s only a matter of time for Young. Aside from playing in the Presidents Cup, Young is well-rested since his last event was the Tour Championship.

Has rounded into form, starting with a 10th at the Tour Championship. He’s followed that up with a 12th at Silverado and came in fourth last week at the Shriners. Keegan Bradley (+3000) was seventh here last year and fired off a 63 in 2019. Plus, he’s in good form after coming in fifth at the Sanderson Farms Championship in his last event.

Has jumped from 183rd in the Official World Golf Rankings to 26th in the past year. In addition to a win at the Honda Classic in February, he’s had two playoff losses in his last four starts, falling to Will Zalatoris at the FedEx St. Jude Championship and to MacKenzie Hughes at the Sanderson Farms Championship two weeks ago.

Speaking of MacKenzie Hughes (+6000), he’s had a week of rest after winning in Mississippi, and was fourth here last year, so +6000 is a great value.

We love the value with our two longshots, and we favor Schauffele, Im, and Kim among the favorites along with decent value from Hoge and Bradley.