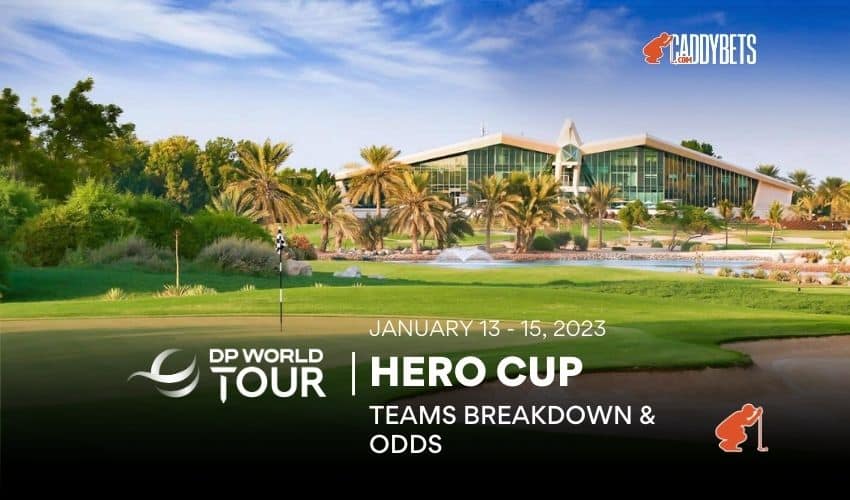 The event features two teams of 10. One is comprised of golfers from Great Britain and Ireland, whereas the other is made up of players from Continental Europe. These are the countries that make up the European team for the Ryder Cup.

The event is part of the DP World Tour schedule but doesn’t issue points for the season-long championship. Members of the winning team each receive $125,000, while the losing team participants get $75,000 apiece.

Abu Dhabi Golf Club also hosted an annual event on the DP World Tour from 2006-21, so participants in the Hero Cup are familiar with the track. It’s a long par-72 course measuring 7,642 yards, but it’s flat and mostly wide open—typical characteristics of a desert course. There is lots of sand, and water comes into play on 11 holes, but it can be a forgiving course.

Three players in this event—all on the UK/Ireland team—have won on this course: Tommy Fleetwood, Shane Lowry, and Tyrrell Hatton.

While this is the inaugural Hero Cup event, this will not be the first time that these two teams have squared off on the golf course.

The first instance was the Joy Cup, which was held four times from 1954-58. It was revived as the Hennessy Cognac Cup from 1974-82, and from 2000-13, the event returned as the Seve Trophy, named after legendary Spanish golfer Seve Ballesteros.

Henrik Stenson was originally set to be Ryder Cup captain for 2023, but he was disqualified from that post when he joined LIV Golf. Donald was then given the job, and he said he wanted to revive this event to give his players and potential future captains match-play experience.

“One of the first things I was keen to do when I was appointed as Ryder Cup Captain was to reinstate a team match play contest to give playing and leadership experience to future Ryder Cup players, vice-captains and captains,” Donald said.

Both captains—Tommy Fleetwood for UK/Ireland and Francesco Molinari for Europe—were named by Donald and will also be participating for their respective teams.

Over the course of all past versions of the competition, the UK team has won 15 of the 17 matchups.

The event runs from Friday through Sunday. Day 1 will feature foursomes matches. This is where teams of two face off and take alternate shots throughout the match. Day 2 is for fourball matches. This time, teams of two play their own ball for the entire hole, and the team member who has the best score on the hole gets that number recorded for their team. Sunday is comprised of 10 singles matches.

Each matchup is done in a match-play format, meaning that one point is at stake for each contest. Five points are available on Friday and Saturday with 10 points at stake on Sunday. If a match ends in a tie, a half-point is awarded to each team.

When the tournament was announced, Donald hoped that Ryder Cup fixtures like Rory McIlroy and Matt Fitzpatrick would take part, but the UK/Ireland team has some definite strengths even without those two. Fleetwood won in November on the DP World Tour, Lowry was victorious at the BMW PGA Championship, and Power won this fall on the PGA Tour and currently leads the FedEx Cup standings.

Other recent winners on the DP World Tour include Jordan Smith, who won for the first time in five years at the Portugal Masters in October, and Robert MacIntyre. The Scotsman won the Italian Open in September on the same course in Rome that will be hosting the Ryder Cup this fall.

Hatton doesn’t have a win as of late, but he’s in tremendous form. In his last three starts, he has finished no worse than eighth and was runner-up to Jon Rahm at the DP World Tour Championship in Dubai.

Team captain Molinari is hopeful to play in the Ryder Cup on his home soil, but he hasn’t had the results of late to back up inclusion on the team, so this is a huge tournament for him if he can thrive in this environment.

While it wasn’t on this course, Pieters did win in this city last year at the Abu Dhabi HSBC Championship. He also has a runner-up, a third, and an eighth-place finish in his last seven starts.

Straka outdueled Lowry at the PGA Tour’s Honda Classic to take home that victory last February. He also was runner-up at a FedEx Cup playoff event, finished seventh at the Tour Championship, and then was runner-up at the Sanderson Farms Championship in October. He did, however, go on to miss three-straight cuts to end 2022.

Detry is enjoying a solid first season on the PGA Tour. In five events this fall, he has a runner-up finish and a ninth along with making the cut at each tournament.

Fleetwood, Lowry, Hatton, and Power of Team UK/Ireland all reside within the top 30 of the Official World Golf Ranking, while no member of Team Europe is. The highest-ranked member of Continental Europe is Thomas Pieters, at 38th.

The European team does have a lot of talent, but from top to bottom, we have to favor Team UK/Ireland.

Here are the latest odds from JazzSports for the DP World Tour’s 2023 Hero Cup.

We are the experts in Golf! Join and get a 50% Sports Welcome Bonus to get the latest Golf Wager Odds and Picks by Jazzsports.