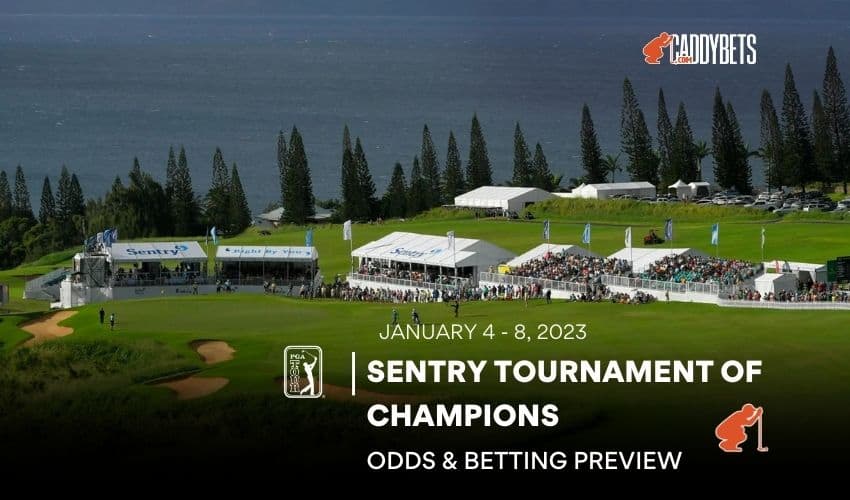 The PGA Tour resumes its 2022-23 season after a month-long break for unofficial money events and the holidays with the 2023 Sentry Tournament of Champions in Hawaii.

The event dates back to 1953, and the field is restricted to golfers who won an event on the PGA Tour in the previous calendar year along with a new change: those who didn’t win but qualified for the Tour Championship in 2022 are also now eligible.

The field stands at 39 despite there being 39 winners last year. Rory McIlroy, the defending FedEx Cup champion is the lone winner not to commit for the second-straight year. He had said in October that he would play in this event, but he chose to extend his holiday break instead.

Jack Nicklaus holds the tournament record of five wins, while Justin Thomas is the only two-time winner in the field.

This event has been held on the Plantation Course at the Kapalua Resort on the Hawaiian island of Maui since 1999. The course is a rare par 73 and underwent an extensive renovation before the 2020 event. The average round was a 72.228 that year and was won by Justin Thomas at 14-under. Players now have the hang of it, as Cameron Smith shot not only a tournament record but a PGA Tour record of 34 under in winning last year’s event. He is ineligible to defend his title due to his current affiliation with LIV Golf.

While Smith had a record-setting tournament last year, Jon Rahm wasn’t far behind, finishing one stroke behind at -33 in his second runner-up finish here. Because of that and his recent performance, he’s a +700 favorite in this year’s event. Rahm was also one of two golfers to card a 61 in a round here last year.

While Rahm only won once on the PGA Tour in 2022, he finished the year on a hot streak. He was fourth in his only event on tour in the fall (The CJ Cup), but on the DP World Tour, he won twice and had a second-place effort in the three tournaments he competed in from September to November.

Other 2023 Sentry Tournament of Champions Contenders

Is a two-time winner here and carded the other 61 last year to go with Rahm’s effort. His -25 last year was only good enough for fifth despite being his best-scoring weekend at Kapalua, and he did that despite shooting a 1-over 74 in the first round. Along with his wins here in 2017 and ’20, Thomas has a fifth and two third-place finishes, giving him five top-fives in his last six years here.

Also at +1000 are Scottie Scheffler and Patrick Cantlay. Scheffler didn’t qualify for this event last year, as his first PGA Tour win didn’t come until February. But he famously won four times in six tournaments, including the Masters. He was runner-up at the unofficial money event Hero World Challenge and had two other top 10s late in 2022.

Cantlay finished fourth here in two of the last three editions of this tournament. Cantlay played just once in the fall but it was a runner-up effort at the Shriners Children’s Open, and he also won the BMW Championship the week before last year’s Tour Championship.

Won this event in 2019 and last year’s 12th-place effort was his lone finish outside the top five since winning. He had a hot spring and summer last year, winning with Cantlay in the team event in New Orleans and then back-to-back weeks at the Travelers Championship and the Genesis Scottish Open. His only tournament in the fall saw him place ninth at the ZOZO Championship in Japan.

Has historically struggled here, but he’s become a consistent winner on the PGA Tour since his last trip to Kapalua. He won twice at the tail end of the 2021-22 season and tasted victory again at the Houston Open in November.

Didn’t win last year but is in the field due to qualifying for the Tour Championship. After a win at the Open Championship and winning the European Tour title in 2021, Morikawa has a chance at a fresh start in 2023. A fifth last year was preceded by two sevenths, so he has a good handle on this course is he is able to take the next step.

Four others are also at +2000, including Sungjae Im, Tom Kim, Matt Fitzpatrick, and Viktor Hovland. Im had three runner-up finishes last summer, including at the Tour Championship, but didn’t contend for a win in the fall. It’s tough to bet against Kim, the 20-year-old who has won twice in his last six starts. Hovland was playing well this fall and burst back onto the scene by defending his title at the all-star Hero World Challenge last month.

Hasn’t played here since 2018, so he hasn’t played on the renovated course, but he ended 2022 as one of the circuit’s hottest golfers, logging back-to-back runner-up finishes to close out the calendar year.

Comes in as the FedEx Cup points leader off his win in Bermuda last year along with a third- and fifth-place finish after that. The Irishman’s confidence has been boosted now that he’s a two-time winner on the PGA Tour, and he came in a respectable 15th here in his debut at this event.

Rahm and Thomas are worth backing as the favorites, and we also like Finau, Morikawa, and Tom Kim, who all have decent value in the limited-field event.

Follow us on Social Media for more 2023 Sentry Tournament of Champions updates!