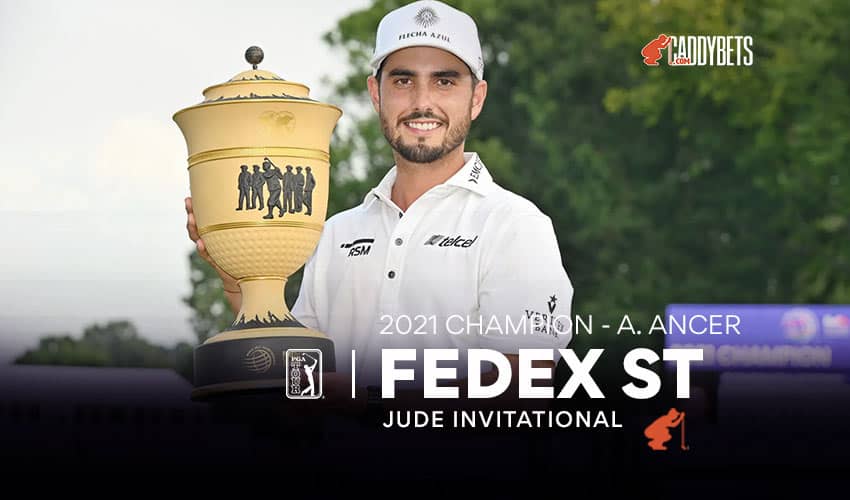 It took an extra two holes, but Mexico’s Abraham Ancer is a winner on the PGA Tour after he sunk a birdie on the second playoff hole to defeat Masters winner Hideki Matsuyama and Sam Burns after the two played an incredible final round at the World Golf Championship-FedEx St. Jude Invitational at TPC Southlake in Memphis, Tennessee.

Ancer shot a 2-under 68 on Sunday, which wasn’t a tremendous round, but Harris English—who led the tournament after each of the first three rounds—faltered with a 3-over 73 in the final round, opening the door for Ancer.

Abraham Ancer became the fourth Mexican to win on the PGA Tour and is the seventh to record his first win at a WGC event. He was somewhat of a longshot here (+3500 to open the event) but is expected to be ranked 10th in the next world golf rankings.

After shooting a 64 on Saturday in this no-cut event, Matsuyama followed that up with a 63 on Sunday to finish at -16 to finish tied for the lead after 72 holes. Burns shot at 64 to also end up at -16.

After the trio parred the 18th hole in the opening playoff contest, Ancer, who finished a then-career-high second at the Wells Fargo Championship in May, took a more aggressive stance on No. 18 the third time around. His approach shot landed six feet away from the cup, and he drained the birdie. He was the champion after Burns missed a 5 1/2-foot putt that was on the same line.

“I went right at it, and the shot played perfectly in my mind, and it came out just how I pictured it,” Ancer said. “It’s a dream come true to win on the PGA Tour.”

Other Winners At The WGC-FedEx St. Jude

English (-15) finished in fourth place with Daniel Berger, Paul Casey, and Cameron Smith placing tied for fifth at -14. English’s final round was going well enough for him to claim his fourth victory of the season until his tee shot on the par-3 No. 11 went into the water. He double-bogeyed the hole and never recovered.

“I played good on the front nine and just kind of hit a road bump on 11,” English said. “I got the wind wrong, and it kind of went downhill from there.”

Ancer and Matsuyama competed in the Olympics in Japan last week, so there was no letdown for them; even though both didn’t start the tournament on fire on Thursday. The two were five and six shots, respectively, behind English after the first 18 holes.

Bryson DeChambeau, who missed the Olympics due to a positive COVID-19 test, also had a rough day on Sunday. Starting out just two shots off the lead, his 74 placed him in an eighth-place tie at -12 for the tournament.

Next week’s stop on tour is the Wyndham Championship in Greensboro, North Carolina. The final event for the top 125 is to be settled before the FedEx Cup playoffs begin the following week.