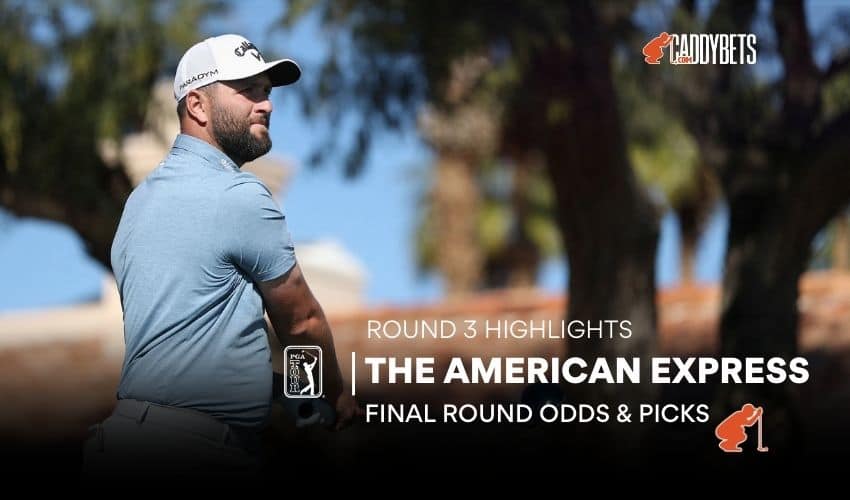 We are tied at the top heading into today’s final round of The American Express with Jon Rahm and Davis Thompson four strokes clear of their nearest rivals on -23. Hoping to chase the leaders down are the duo of J.T Poston and Christiaan Bezuidenhout who will start the day on -19. Multiple PGA Tour winners Sam Burns and Tom Kim headline a group of four players who will start the day on -18, five strokes off the lead. Here are our American Express Round 3 Recap and Golf Betting Odds to win the final round!

Heading into yesterday’s third round the main question centered around whether Davis Thompson could maintain his composure and protect his two-stroke lead from world number four Jon Rahm.

At one stage that didn’t look likely as Rahm started like an express train – picking up four shots through his first five holes. Further birdies would follow on the eighth, ninth, tenth, and twelfth, moving Rahm into a three-stroke lead on -24. A dropped shot on the fifteenth would see Rahm finish the day on -23.

Undeterred by Rahm’s stunning golf, Thompson did an excellent job of keeping calm and composed and kept things solid with six birdies of his own. A dropped shot on the par 4 14th was the American’s only blemish of the day and he will head out today believing he has the game to win and compete with one of the game’s very best.

Bezuidenhout makes a move with a stunning -10, 62

The main mover on moving day was South Africa’s Christiaan Bezuidenhout. A multiple winner on both the DP World Tour and African Tours, Bezuidenhout would score ten birdies in fifteen holes to move to within four strokes of the lead.

Remarkably the South African’s 62 wasn’t the round of the day. That honor belonged to Dylan Wu who moved into the top ten with a superb round of 61. He could be a player to keep an eye on today.

The American Express Round 4 Betting Preview

Over the last few years of The American Express the winning scores have been between -20 and -30 and it would be no surprise if the winner today shot well into the 30s. With the players having plenty of opportunities to score, seventeen players will start the final round within six strokes of the lead and will believe they will be able to go on a scoring charge and win.

With a four-stroke lead over their nearest competitors, there isn’t a surprise to see that both Rahm and Thompson are the two favorites for the title, with Rahm considered the heavy favorite of the two.

The difference in pedigree between the two couldn’t be wider. Rahm is after his fourth title in just his last seven starts, whereas Thompson is looking for his first. Thompson did well to handle the occasion yesterday, but it will be fascinating to see how he adjusts today.

Rounding out the top three in the betting is J.T. Poston. Now ranked 50 in the world, Poston has had a solid start to the year – posting two top-25 finishes in both the Sony Open and Sentry Tournament of Champions. Poston is playing solid golf and could represent some value today.

Of the chasing pack, the eye is clearly drawn to some big names. Starting day five off the lead are Sam Burns and Tom Kim. Both have shown numerous times that they can score efficiently and quickly. With both needing to chase a score, expect fireworks from this all-action duo.

Scottie Scheffler started the week knowing that a positive week could see him return to the top of the world golf rankings and he is within touching distance of doing just that. Scheffler will start today six shots off the lead but will still greatly fancy his chances. Scheffler is priced at a huge +5000 to win and it would be foolish to count him out.

Follow us on Social Media for more The American Express updates.