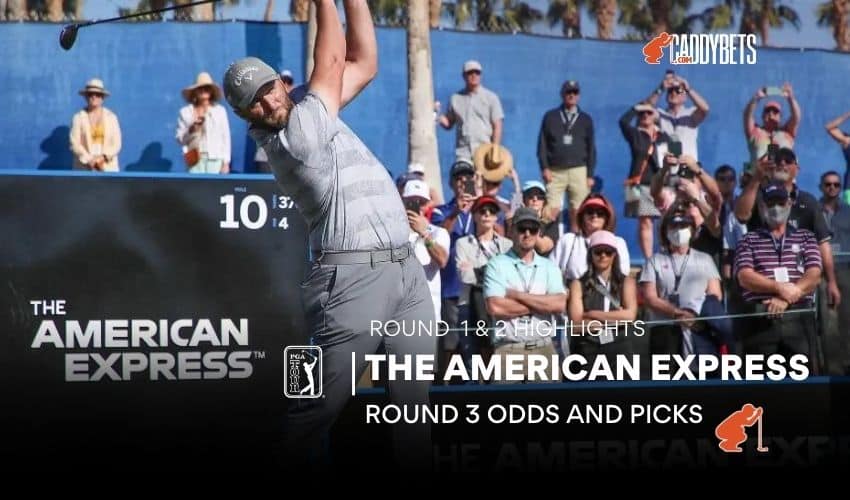 The first signature event of the 2023 PGA Tour – The American Express has reached its halfway stage and there is a surprise leader sitting at the top. Here our American Express Rounds 1 & 2 Recap

World number 169 American Davis Thompson leads a star-studded field by two strokes on -18. His nearest pursuer is Jon Rahm who is on -16, with a whole host of players which include Jason Day and Sung Jae-Im three shots further back. All eyes will be on the young American and how he handles the pressure of the final 36 holes.

A unique tournament, The American Express is played over three courses;

Each of the 156 players starting the week, are guaranteed to play three rounds with the cut being made after round 3. Each player will play one round on a different course, before those who qualify for the final round regroup at the Pete Dye Stadium Course where the final eighteen holes will be played.

Always up with the leaders after a fast start in round 1. Davis Thompson showed no signs of nerves yesterday – impressively backing up his first-round score of 62 with a solid 64. In a sign that perhaps he was starting to feel the pressure, Thompson posted his first bogeys of the week during his second round, but with a five-stroke lead over his challengers in third place, Thompson should be able to go out with a positive mind set today.

Rahm looks for yet another win

Spaniard Jon Rahm headed into the tournament this week, looking to land his fourth win in his last seven starts and he has placed himself in an ideal position to do just that.

Through his first 36 holes Rahm has just dropped one shot and took sole lead of second yesterday with four birdies in his final nine holes. Rahm is bound to pile the pressure on his more inexperienced rival over the next two days as he looks to keep his hot streak going.

Considering his recent form, it isn’t a surprise to see Jon Rahm at the top of the betting. The world number four can still be backed at a decent price of +120. If Rahm brings the sort of golf that he has played with through the first two rounds he is the man to beat.

With just two top twenty finishes in his last ten events, few would have predicted that Davis Thompson would be leading this esteemed event through the first 36 holes. Thompson is the second favourite for the event and has been a birdie machine through the first 36 holes. With so much pressure to handle and with Jon Rahm looming in the rear-view mirror it will be fascinating to see how he copes today.

A group of five players currently sit five strokes behind Davis Thompson and perhaps the most prominent of challengers could be the South Korean star Sung Jae Im.

Im on his day can be one of the most prolific scorers on the PGA Tour and he won’t be daunted by the five-shot deficit he currently faces. Odds of +1000 could be the value play of the day.

Hoping to climb up the leaderboard in today’s third round will be Tom Kim. Kim has taken the golfing world by storm over the last 12 months and looks set for the very top of the game. Kim shot a stunning 62 yesterday and arrives today full of confidence. Odds of +1200 could turn out to be a steal.