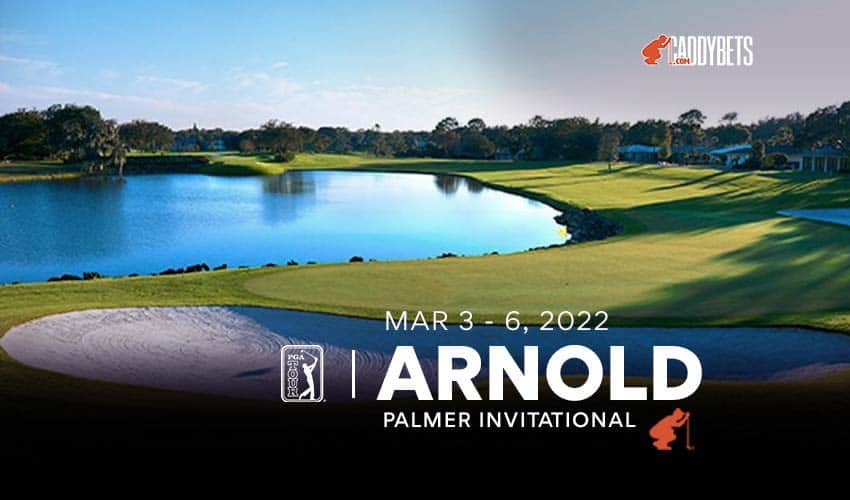 The first of two-straight weeks of strong tournaments takes place in Orlando, Florida for the Arnold Palmer Invitational ahead of next week’s The Players Championship.

While the API isn’t a major or a World Golf Championship event, it does retain an elevated status on the PGA Tour, as winners receive a three-year exemption on tour, which is one more year than in standard events. In addition, 550 FedEx Cup points are awarded to the winner instead of the usual 500.

The event takes place at Bay Hill Club and Lodge, which was owned by Arnold Palmer, and he hosted the tournament until his death in 2016.

The event dates back to 1966, when it was known as the Florida Citrus Open Invitational. While Payne Stewart owns the course record of 264 set in 1987, the tournament is notable for Tiger Woods’ domination of it. Woods has won this event eight times, and his final win in 2013 tied the record for most wins in a single tournament with Sam Snead, who won the Greater Greensboro Open eight times. Woods then tied the record again later in 2013 by winning the WGC Bridgestone Invitational for the eighth time.

Bryson DeChambeau won this event a year ago by one stroke over Lee Westwood, but DeChambeau will not be defending his title, as he withdrew from this year’s event earlier this week with a hand injury that he suffered last month in the Saudi Invitational.

The course at Bay Hill opened in 1961 but was gradually redesigned by Palmer over the years. The course stands at 7,466 yards and is a par-72 track. The first hole provides a challenge with deep bunkers bordering the green, and the second hole is a par 3 that can play as long as 245 yards.

The rough is overseeded and tall, so both distance and accuracy are needed here, and DeChambeau’s driving ability served him well not only last year but in finishing in the top five in his two appearances before his victory as well.

The course winds down with a 513-yard par-5 16th hole that sees its fair share of birdies, and the par-3 17th features a green that has water on three sides and a beach bunker protecting the rest.

The par-4 18th is 461 yards but requires an excellent tee shot in order to reach the green in two. The green bends to the right around water, so a short shot will get wet, and a long shot will find a waste bunker. This is one of the more dramatic holes on the PGA Tour, as Tiger Woods birdied this hole to win the tournament by one stroke three times, and Robert Gamez famously holed out an eagle here in 1990 to win by a shot over Greg Norman in one of the most clutch shots in golf history.

Rahm and Rory Are Favorites

The world’s No. 1 ranked golfer, is the favorite here at +750 despite making his debut at Bay Hill. With DeChambeau not in the field, expect Rahm to benefit from his long, accurate drives. Jon Rahm is No. 1 in distance of all drives, Shots Gained: Off-the-Tee, and greens in regulation on the PGA Tour this season. While he has not won, he’s finished no worse than 21st in five events in 2022.

Is the other favorite at +1200. What may give him the advantage over Rahm, however, is experience. The Northern Irishman won here in 2018—a part of five-straight top-10 finishes in this event. After winning his only PGA Tour appearance in the fall (The CJ Cup), he returned to the tour two weeks ago with a 10th-place finish at The Genesis Invitational.

Even last year when McIlroy was slumping around this time with three missed cuts in five events (including heading home early from the Masters), Rory still finished 10th here, starting strong with a 66 but dropped from seventh to 10th on Sunday after shooting a 4-over 76. Now that McIlroy is playing more like his usual self, he could be extremely dangerous this weekend.

DeChambeau’s win last year broke a five-year streak of non-U.S. golfers winning the API, and that international flavor could resume if Rahm or McIlroy are victorious. Looking further down the odds board, just two of the next 10 contenders are Americans.

Leading the U.S. contingent is Scottie Scheffler (+1800), who broke through with his first PGA Tour win at the WM Phoenix Open three weeks ago. What’s really notable, however, is that there wasn’t a letdown in Scheffler’s game after scoring his first win, as he finished seventh at Riviera against a field that had all 10 of the world’s top-10 golfers in it. Scheffler, who finished 15th in his only appearance in this event in 2020, has three top-five finishes in nine events this season and sits third in the FedEx Cup standings.

Has one official win in this PGA Tour season (World Wide Technology Championship at Mayakoba), but he also won the unofficial money event Hero World Challenge and outdueled Rory McIlroy in Dubai earlier this year on the DP World Tour (formerly the European Tour).

Since returning from overseas, Hovland briefly stumbled by missing the cut at the WM Phoenix Open but rebounded with a fourth-place effort at The Genesis Invitational. The Norwegian hasn’t had a whole lot of success here, posting a best finish of 40th in three events despite making the cut in all three appearances. He started strong last year with rounds of 69 and 68 to sit at 5-under after the second round, but he was a combined +11 on Saturday and Sunday.

FedEx Cup points leader Hideki Matsuyama, the only two-time winner on the PGA Tour so far this season, rolls off here at +2000. Matsuyama hasn’t missed a cut in nine events this season and is similarly perfect in seven starts at Bay Hill. The defending Masters champion’s best finish here is 18th, which occurred last year, but with the way his game is going, he should be a threat this weekend. Over the last 24 rounds, Matsuyama leads the field in Strokes Gained: Total, showing that his overall game is clicking.

Missed the cut at the The Honda Classic last week despite being the betting favorite going in. Will that extra rest lead to a good performance at Bay Hill? History is on his side here, as he owns two third-place finishes in three tries in Orlando.

Are two Englishmen who were a part of the European Ryder Cup team this past year, and they both come into the API with +2500 odds. Hatton is making his first PGA Tour start of 2022 this week, but he finished in the top-six twice so far this year on the DP World Tour, and he won at Bay Hill in 2020. Fitzpatrick had to pull out at Riviera due to illness, but he had two top-10 finishes on the West Coast swing prior to that. He’s also on a streak of three-straight top 10s at Bay Hill, including a runner-up finish.

In a stretch that has seen four first-time PGA Tour winners in five weeks, could Will Zalatoris be the latest beneficiary of that run? Zalatoris (+2500) was 10th in his first try here, right before finishing runner-up at the Masters, and his game appears on point with a sixth at The American Express and a runner-up at Torrey Pines before having to miss Pebble Beach due to a positive COVID-19 test.

Won here in 2017 and has two other top-three finishes in 12 starts here. In addition, he’s been playing consistently great golf in the 2021-22 season, having made the cut in each of his eight starts. He has three top-10 finishes on the season and only two finishes outside of the top 20.

Hasn’t won since The Honda Classic in 2019 but was ninth in that event last week and finished 10th two weeks prior at the WM Phoenix Open. He owns finishes of fifth and sixth in three starts at Bay Hill.

Seems to have rediscovered something in his game, as he was third in the Farmers Insurance Open and followed that up with a 24th the next week at Pebble Beach. Well rested after taking a few weeks off, Day is a former winner here (2016) and was 31st last year but was 6-under going into the final day before his game came off the tracks with a 79 on Sunday.

After seeing four first-time winners and Joaquin Niemann winning at Riviera in a span of five weeks, it feels like a familiar face will win in Arnie’s kingdom. We are backing the international trio of McIlroy, Matsuyama, and Hatton this week.