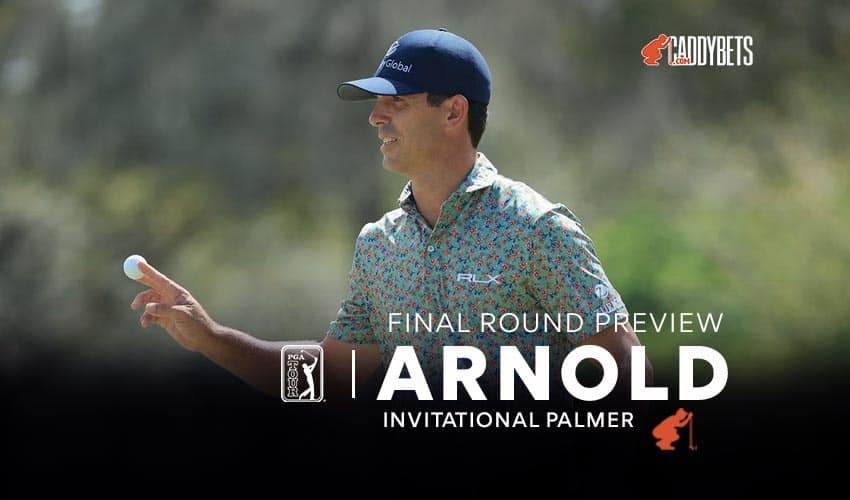 When the smoked cleared Saturday evening, Billy Horschel and Talor Gooch were atop of the leader board with a share of the lead. However, Horschel had to battle the elements to squeak out a birdie on the 18th hole Saturday for a 1-under 71. With that birdie, Horschel tied Gooch at 7-under and became the odds-on favorite over Gooch to win the Arnold Palmer tournament at +260, as projected by Jazzsports, but not by much, because Gooch is sitting with +350 odds.

Sitting between Horschel and Gooch is Viktor Hovland at +300 odds to win, as projected by Jazzsports. Friday’s leader, who started his round at 9-under, was not impervious to the conditions on Saturday. He three-putted from 10 feet on the par-3 second hole, only to recover by holing a bunker shot for eagle on the par-5 sixth, but the back nine was a nightmare for Hovland, as he shot a 45 on the back nine, twice three-putting for a bogey, and then missing the fairway on two other holes. Even after all of that, he’s still only one shot behind the leaders.

The day’s low score came from Scottie Scheffler, who actually was able to gain some strokes and finish the day two strokes back of the leaders and increase his odds to win to +500, as projected by Jazzsports. After missing three straight par putts from 6 feet or closer to cap off his front nine, Scheffler made three birdies and a 20-foot eagle for a 31 on the back for a 68.

With similar weather expected for the final round Sunday, the 2022 Arnold Palmer Invitational is wide open. Talor Gooch has been solid all week, Billy Horschel has played himself back into contention, and Rory Mcllroy loves to play on Bay Hill, but none of them will win on Sunday. So instead, come Sunday evening, Scottie Scheffler will be hoisting the trophy and celebrating a hard-fought victory at Bay Hill. With eight players separated by four shots, the final round at the Arnold Palmer Invitational Sunday should be a shoot-out, but I expect Scheffler to do just enough to squeak out the victory.

After Round 3 at the 2022 Arnold Palmer Invitational, Billy Horschel has been inserted as the favorite, as projected by Jazzsports.

Join us to receive our daily Golf content, and make sure to stay tuned for the Official World Golf Rankings, PGA Tour Schedule and golf odds.