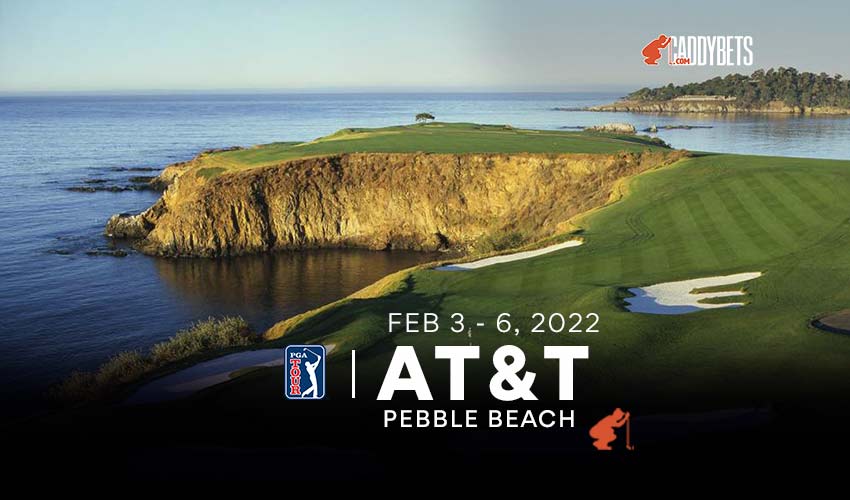 PGA Tour Travels to Historic Pebble Beach, Where Defending Champ Berger Has to Contend With Cantlay

The AT&T Pebble Beach Pro-Am, despite playing opposite the Saudi International that has 20 of the world’s top-50 golfers taking part, has a strong field that includes defending FedEx Cup champion Patrick Cantlay.

The tournament dates back to 1937, where Sam Snead won the first two events and has four titles overall. Phil Mickelson and Mark O’Meara hold the record with five titles, as Mickelson won his fifth here in 2019. Tiger Woods famously won twice here in 2000, winning this event along with the U.S. Open.

Daniel Berger is the defending champion, and Brandt Snedeker holds the tournament record with a 22-under 265 that he posted in 2015

Pebble Beach Golf Links is one of the world’s most famous golf courses given its Pacific Ocean views. It also has the smallest total putting surface on the PGA Tour at 3,500 square feet.

Due to the amateurs also playing, the format is unique. Each player plays a round at three different courses—Pebble Beach Golf Links, Spyglass Hill Golf Course, and Monterey Peninsula Country Club—and the cut takes place after 54 holes instead of the usual 36. The remaining golfers play the final round at Pebble Beach on Sunday.

Patrick Cantlay’s defense of his FedEx Cup championship from a year ago is going quite well. In two starts this year, he was fourth at the Sentry Tournament of Champions and ninth at The American Express two weeks ago. He also shot a 62 in the opening round of this event last year on his way to a third-place finish, and he’s made the cut in this event in all five tries.

Cantlay is the favorite at +650, as many of the other top stars aren’t here. Jon Rahm and Viktor Hovland are taking the week off, while Dustin Johnson, Bryson DeChambeau, and others received an exemption to play the Saudi event on the Asian Tour. Cantlay is also tied for the best cumulative score to par in PGA Tour events in California over the past three seasons with a -99.

Daniel Berger is the second favorite at +1000. The defending champion has some success defending a tournament title, as he did so at the WGC-FedEx St. Jude Championship in 2017. He also has had success at Pebble Beach before breaking through last year, recording a 10th in 2015 and a fifth in 2020.

Three golfers are tied on the odds board at -1800. One of those is Maverick McNealy, who—along with Cantlay—is the other golfer with a cumulative 99-under par in California events over the past three years. That includes a runner-up finish here last year, where his 16-under 272 was two shots off Berger’s performance, and a fifth in 2020. He started his third full year on the PGA Tour with a runner-up in the Fortinet Championship in Napa and was playing well at the Farmers Insurance Open last week before a 75 in the final round dropped him to a 30th place finish.

Jason Day also comes in at +1800. The Australian hasn’t had a win on the PGA Tour since stringing 10 together from 2014-18, but he tied for third at the Farmers Insurance Open and has a great history at Pebble Beach to the tune of eight top-10 finishes in 12 starts. Among his last five events here, his worst was a seventh last year, and he was runner-up in 2018.

Jordan Spieth is the other golfer at +1800, and this is around the time last year where he shook off a four-year slump and started contending again, leading up to a win in the spring. Spieth was fourth at the Waste Management Open, which came before Pebble Beach last year, and then followed that up with a third here. He won this event in 2017 and hasn’t missed a cut at Pebble Beach in nine career starts.

With Will Zalatoris having to withdraw due to COVID-19, Cameron Tringale (+2500) is tops on the watch list for a first-time winner. He finished one shot behind Zalatoris and eventual winner Luke List last week at Torrey Pines, and his spot of seventh in the FedEx Cup standings is the highest position for a non-winner. He is looking to improve on a seventh-place finish here in 2021.

Englishman Justin Rose (+2000) hasn’t played here in five years but was sixth in 2016 and finished in that spot at Torrey Pines last week. It’s been three years since his last win (also at Torrey Pines), but he’s picked things up as of late, including a ninth at the Hero World Challenge and 12th at The RSM Classic in late November.

Kevin Kisner (+3000) doesn’t have the history here, but he played well in Hawaii (eighth at the Sentry Tournament of Champions and third at the Sony Open). He’s also well-rested, as that was his only action in 2022.

We missed on Michael Thompson (+6000) at The American Express, but that was his only missed cut in seven starts this season, and after finishing 11th at the Farmers Insurance Open, he’s finished in the top 15 in three of his last five starts.

Tom Hoge, the runner-up at The American Express two weeks ago, is also at +6000. He was 12th here last year and hasn’t missed a cut at Pebble Beach since 2015. Also playing in his favor: third on the PGA Tour in rounds under par this season with 28.

It’s hard to pick against Cantlay, and we will do so here to play it safe. The trio of Spieth, McNealy, and Day provide good value, as does Seamus Power at +2500, as he’s finished in the top 15 in six of his last seven starts on tour, including two top-five performances.

Join us to receive our daily Golf content and make sure to stay tuned for AT&T Pebble Beach Pro-Am updates, golf news, and PGA Tour schedule.