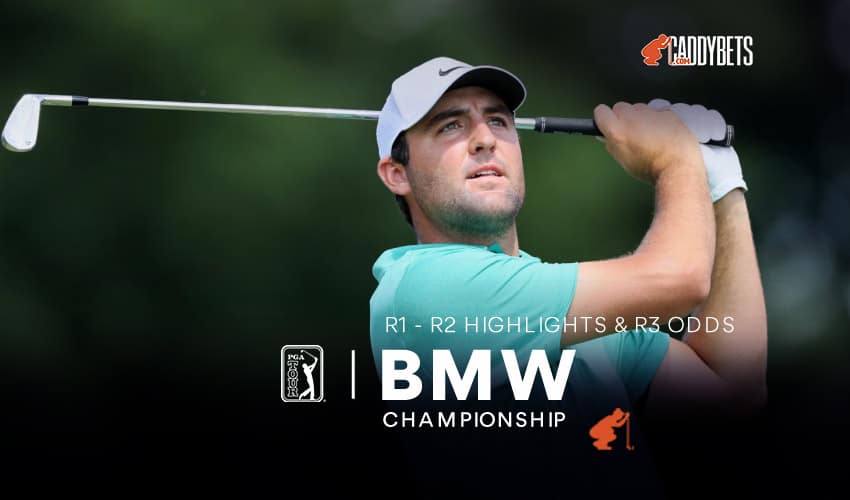 What a weekend we have in store. If last week’s St Judes Classic took a little time to get going, the BMW has gotten off to the hottest of starts. Here our BMW Championship Rounds 1&2 Recap

Currently leading the way is Australian Adam Scott who holds a slender one-stroke lead. Scott leads from a quartet of players who will start today’s third round one shot behind. This group includes Corey Connors, Scottie Scheffler, Cameron Young and Jordan Spieth.

Nestled in just behind and sitting two strokes behind Scott are the duo of Rory McIlroy and Xander Schaufelle.

With the ever-imposing threat of LIV Golf, it was essential that during the season-ending playoffs the PGA Tour showed what it was all about and that is certainly happening here.

Adam Scott will head into today’s third round slightly disappointed that his lead isn’t bigger. Scott turned back the clock during his second round demonstrating some superb ball striking. At one point, Scott led by three but a disappointing double bogey on the seventh hole saw his lead reduced to just one.

Keegan Bradley led the way after round one after shooting a stunning -7, 64. However the popular American found things a whole lot tougher in round 2, shooting a disappointing +3, 74. He will start today four behind.

Special mentions must be given to Keith Mitchell and Kurt Kitayama who both shot the round of the day yesterday, with a pair of -5, 66s.

With no cut, the entire 68 man field will be teeing it up over the weekend.

It seems fitting that the current favorite for this year’s BMW is world number one Scottie Scheffler.

Scheffler has had a quiet things of late but is looking to end his year how he started it.

Next in the betting comes Rory McIlroy. McIlroy has had a great year but has only the one title to his name. McIlroy knows exactly how these playoffs work, having twice been crowned the FedEx Champion. With a good weekend, he can put himself in the perfect position for win number three.

Cameron Young has once again proved his class  and has shown that he has more than enough game to compete with the very best. All Young is missing is a PGA victory and he will be hoping he can put that record straight here.

Rounding off the top 4 in the betting is our leader Adam Scott. Scott has become one of the most consistent players on Tour but hasn’t won for two years.

Scott has amassed 31 professional wins throughout his career so can clearly handle the pressure. Whether he has the scoring power to compete with some of the worlds best remains to be seen.