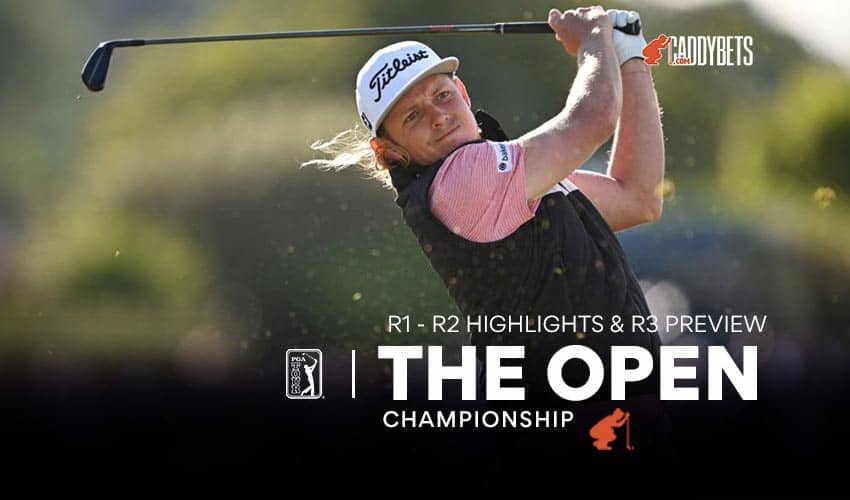 St Andrew’s is playing fast and firm, but with the wind not being a factor, the course is extremely getable.

With birdie chances galore we are set for a fantastic weekend.

Heading into the weekend with the lead is Cameron Smith. Smith has created history, shooting the lowest ever Open score after two rounds. It’s the putter that was working to full effect as he shot a magnificent bogey-free second round of 64.

Smith knows what it takes to compete at the top end of a major leaderboard and will be hoping to win his first major with much of the same this weekend.

Hot on the Aussies’ tail is Cameron Young. He will start the third round two strokes behind Smith after shooting the lowest 36-hole total by an Open rookie.

Young headed into round 2 as the overnight leader and didn’t seem phased to be leading such a prestigious field. A solid 69 to back up his opening 64 see him firmly in the mix.

Nestled behind the two Cameron’s are two of Europe’s finest golfers.

Rory McIlroy is attempting to end his eight-year wait for a major and finds himself three shots behind. McIlroy’s wedge and iron play has been at its very best and with the vociferous backing of the home crowd behind him, he will be expecting to make a charge up the leaderboard during today’s third round.

When you think of Viktor Hovland you wouldn’t necessarily think he would be a force around the Old Course. The big-hitting Norwegian has admitted that his short game can often be his weakness, but he has shown magnificent touch as he backed up his first-round 68 with a solid 66. Hovland undoubtedly has the game to win multiple majors and he will be hoping he can net his first this weekend.

Despite Smith leading the way, anybody within ten strokes of the lead will still feel they have a chance of winning this year’s Championship.

Dustin Johnson, Patrick Cantlay, Tyrell Hatton, Scottie Scheffler and Matt Fitzpatrick are all within seven strokes of the lead and all will believe they have a chance of lifting that famous Claret Jug come the end of Sunday’s final round.

Cameron Smith +165 rightfully leads the betting after a ruthless display of putting during yesterday’s stunning second-round performance. Smith netted this year’s Players Championship and looks ready to make the major leap. If his putter can remain hot he will be a tough man to peg back.

No man will carry greater fervor than Rory McIlroy +375.

McIlroy’s gremlins in both his short game and putting look to be an issue of the past, but it’s his driving that will be the key factor. So far he has been able to keep his ball out of trouble but more is needed if he is to end his eight-year major drought.

Cameron Young looks to be unflustered by his position at the top of the leaderboard. An Open rookie, a lack of experience could cost the New Yorker as we get to the crunch but he currently seems in complete control of both his ball and emotions. Odds of +775 could be the value play of the round.

If the wind remains calm, then this course could be perfectly suited to Dustin Johnson +1000. DJ can drive the ball a mile and should continuously be able to give himself birdie and eagle chances. If he can get the putts to drop, the four-shot deficit he currently faces can be quickly erased.

An outsider, but Tyrell Hatton +2500 has won the Alfred Dunhill Links twice around St Andrew’s and there is arguably no man near the top of the leaderboard that can match his course knowledge. Hatton has shown how comfortable he is around the Old Course with rounds of 70 and 66. He could be flying under the radar this weekend.