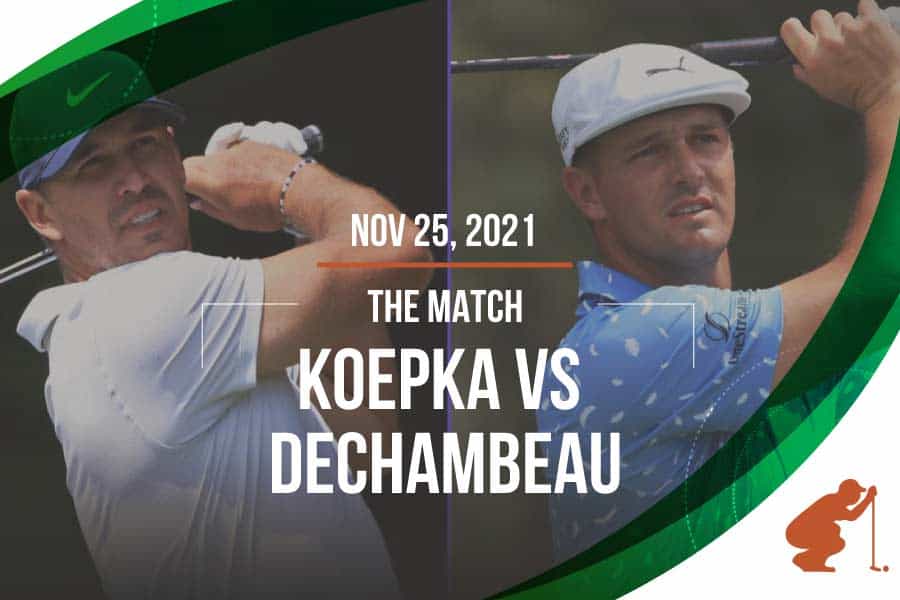 Bryson DeChambeau and Brooks Koepka Ready to Square Off

While you’re enjoying Thanksgiving leftovers on Friday, a 12-round one-on-one contest between two rivals and the biggest names in their sport will be taking place in Las Vegas, Nevada, but in a city known for its prize boxing and mixed martial arts (MMA) fights, this won’t be a 12-round match contested in a ring, rather a 12-round golf exhibition between Bryson DeChambeau and Brooks Koepka at the Wynn Golf Course in Las Vegas

This is the fifth edition of “The Match” series, which is broadcast in the United States on TNT and other Turner networks like TBS and TruTV. The event takes place on Friday, November 24 at 4 p.m. Eastern time.

This will be the first event to take place at the Wynn Golf Club and the first in Las Vegas since the first edition of the event between Tiger Woods and Phil Mickelson in 2018.

The course was designed by Tom Fazio and opened in 2005 right on the Las Vegas Strip, which makes for a natural oasis amid a sea of hotels, casinos, and desert sand. The course is 6,722 yards and a par 70, but DeChambeau and Koepka will just be playing 12 holes.

The format will be match play, meaning that the golfers compete for a point on each hole. The winner of the hole gets a point, and the point is halved if they log the same score on the hole. Whoever has the most points at the end of the 12 holes is the winner, and they will go to a playoff in case of a tie.

The players will be vying for money for their respective charities—Shriner’s Hospital for DeChambeau and St. Jude Children’s Research Hospital for Koepka. In addition, several other charities will be featured.

There are opportunities for each golfer to earn more money for their organizations. There are “closest to the hole” competitions taking place on four holes and the par-5 seventh hole will feature a longest drive challenge.

There have been four prior versions of “The Match” since 2018. The first one was the only other one-on-one matchup, as Mickelson beat Woods on the 22nd hole, which was the fourth playoff hole after the two were tied after 18. The other three all featured Mickelson along with two celebrity athletes. The second event was on May 24, 2020, when Woods and Peyton Manning defeated Mickelson and Tom Brady 1-up. Last November, Mickelson and Charles Barkley defeated Manning and Stephen Curry 4 and 3. Then this past July, DeChambeau and Aaron Rodgers topped Mickelson and Brady, 3 and 2.

Mickelson and Barkley will be participating in this event as broadcasters.

Two of the game’s more established stars, Koepka and DeChambeau were both a part of the U.S. team’s Ryder Cup victory in September. They have each won majors and have had a couple tussles over the years, making this an interesting one-on-one rivalry.

At The Northern Trust in 2019, Koepka was critical of slow play during the tournament, which appeared to be aimed at DeChambeau. The two then started going back and forth, mainly on Twitter, with the feud coming to a head before The Tour Championship in 2020. Koepka was egging fans on to call DeChambeau “Brooksie,” and the PGA Tour eventually had to say that fans doing so would be against the code of conduct and would be removed from the gallery.

But if the competition gets a little heated on the course, don’t be surprised if Koepka says something that might get under DeChambeau’s skin, and we know how much of an impact it could have on the golf course if someone is taken out of their game mentally.

DeChambeau, 28, hasn’t played since the Ryder Cup and finished the 2020 season strong, coming in second at the BMW Championship in losing a six-hole playoff to Patrick Cantlay, and then was seventh at the season-ending Tour Championship.

He joined the PGA Tour in 2017 and won the John Deere Classic that year for his first of eight victories. He has one major title—the U.S. Open in 2020—and has several other wins as high-profile tournaments, including The Memorial, The Northern Trust, the Shriner’s Hospitals for Children Open in Las Vegas, and the Arnold Palmer Invitational, in what was his only victory in 2021.

Kopeka, 31, has struggled since the Ryder Cup, missing the cut in two events and finishing tied for 38th in his best result in the other two. He also has eight wins, but half of those have come in majors. After winning the Waste Management Phoenix Open in 2015, his next three wins were in majors.

He dealt with a wrist injury toward the end of the 2020 season that caused him to withdraw from the Tour Championship, and aside from a solid performance at the Ryder Cup, has struggled on the tour so far in the 2021-22 campaign.

The latest odds from Jazz Sports show that DeChambeau is a slight -125 favorite over Koepka, whose odds sit at +105.

Leading up to “The Match,” it appears as if DeChambeau is taking things more seriously. He also has an edge in the driving department, being one of the biggest hitters on the PGA Tour. Koepka’s struggles, meanwhile, over the past month can’t be overlooked, especially since he was dealing with an injury late in the summer and doesn’t seem to have regained his form since then.

Sign up and make sure to stay tuned for DeChambeau, updates, PGA news and PGA Tour schedule