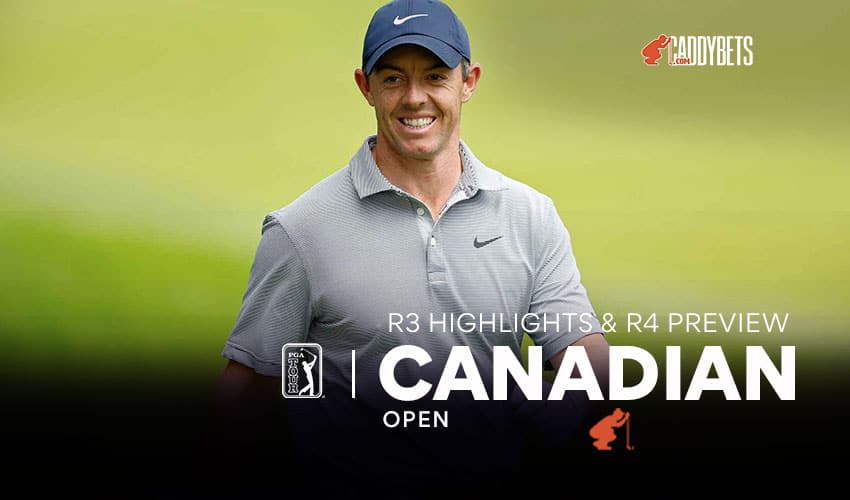 Canadian Open Round 3 Highlights & Round 4 Odds

If ever the PGA Tour needed a week to remind the rest of the world of the quality it possesses it’s been this one.

With more PGA professionals jumping ship to join Greg Norman’s new LIV Tour, the pressure was on the Canadian Open to deliver and through the tournaments first three rounds it certainly has done.

Played in a truly wonderful atmosphere the cream of the crop rose to the top of the leaderboard in round three and some of golf’s biggest names are preparing to do battle in today’s final round.

Round 3 was as dramatic as it promised to be. The day started with Wyndham Clark holding a narrow one shot lead. A host of stars started the day in contention and the feeling was that Clark wouldn’t hold onto his lead for long.

Tony Finau has become somewhat of a forgotten man this year due to a pretty quiet first six months of the season. He grabbed everybody’s attention on Saturday with a stunning eight under 62, which included seven birdies, one eagle and just the one bogey. He leads the way on -11.

Joining Finau at the top of the leaderboard is last year’s champion Rory McIlroy. McIlroy has looked in complete control of his game during his first three rounds and a five under 65 was enough to secure his place in todays final group.

The big names are stacked just behind with Sam Burns and Justin Thomas both just two strokes behind the leaders. Burns looks set to continue his ascent to the top of world golf and a third round 65 has put him right in the mix. If not for Finau’s heroics then Justin Thomas would have had the round of the day. The US PGA champion scored a breathtaking 63 which included no bogeys, five birdies and one eagle.

Ahead of what could be a career defining day for so many players in the field JazzSports have provided all of the latest golf odds ahead of todays final round.

With four top quality players at the top of the leaderboard there is no surprise to see that the betting revolves around Finau, McIlroy, Thomas and Burns. These four rightly start as the favorites and you have to believe that one of the winners will come from one of these four.

With not much to separate the players we have turned to stats to see where the winner is likely to come from.

McIroy is our current favorite and the Northern Irishman is in the top ten this week when it comes to putting average, strokes gained off the tee and strokes gained tee to green. McIlroy’s game looks to be holding together and he could be the man to beat. He only ranks 28th in strokes gained through approach and he will want to tidy that up.

Finau currently is in the top ten for putting averages and strokes gained from tee to green. A lethal driver of the ball, Finau can dominate any course in the world. If he can drive the ball as well as he did yesterday he will be in with a great chance of winning a fourth PGA title.

Justin Thomas (+450) fired his way back into contention after a stunning third round performance. The US PGA champion has been the second best player in the field when it comes down to strokes gained from tee to green, but only ranks 32nd when it comes to putting. The putter was hot yesterday and will need to be so again.

Sam Burns (+650) is perhaps the dark horse of the four and leads the tournament when it comes to his approach play. Burns is the latest winner out of all four of the main contenders and will be confident of scoring yet another win.