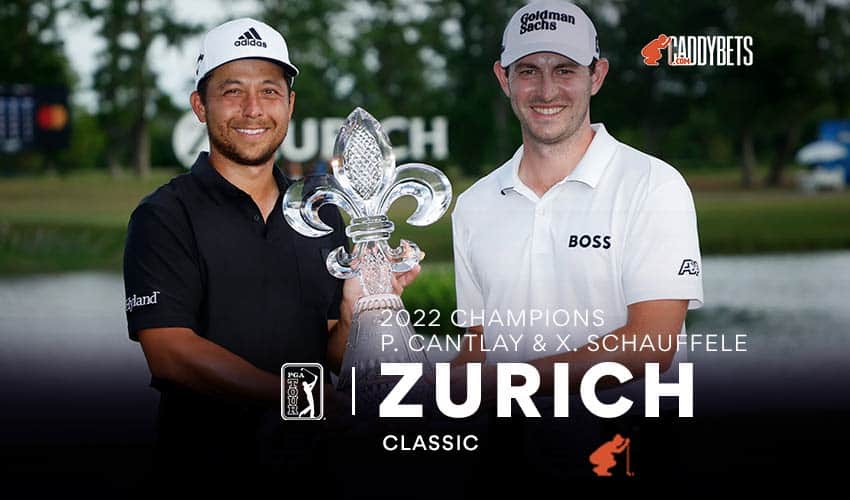 Patrick Cantlay and Xander Schauffele held off Sam Burns and Billy Horschel by two strokes Sunday in the Zurich Classic of New Orleans to complete a record-setting, wire-to-wire victory

After going 0-for-2 in playoffs this year, defending FedEx Cup champion Patrick Cantlay found what he needed to break through in 2022—Ryder Cup partner and Olympic gold medalist Xander Schauffele.

After the pairing went undefeated in Ryder Cup play as part of the U.S. team’s historic defeat of the European team last September, Cantlay and Schauffele teamed up again to set the team record at the Zurich Classic of New Orleans, winning at 29-under by two strokes over Sam Burns and Billy Horschel.

The pair shot an even-par 72 by taking alternate shots on Sunday, but they entered the day with a five-stroke lead over the South African pair of Garrick Higgo and Branden Grace. Horschel, who is the only golfer to have won this event as an individual and part of a duo, closed to within one of the leaders at one point, but Cantlay and Schauffele were steady enough to finish at even par.

It was the four-ball days where the winners made their mark—Cantlay and Schauffele shot a 59 on Thursday and followed it up with a 60 on Saturday.

“It was a great week,” Cantlay said. “Second time we’ve played this event and we were looking forward to it since last year. We really always enjoy being with each other, both on and off the golf course, and we both played exceptional this week and had a great time doing it.”

Schauffele, who broke a PGA Tour win drought that lasted over three years, described the pair’s strategy after the round on Saturday.

“We’re going to try and do exactly what we did on Friday, which is sort of plot along, play our games, leave each other in good spots and try and hole some putts,” Schauffele. “It’s the third quarter. We finished a really good three quarters here and we have one more to go.”

The Burns and Horschel duo birdied three out of four holes to get within striking distance, but Burns—now No. 2 in FedEx Cup standings—hit his tee shot on No. 16 into the water to end any chance of a comeback win, but their -27 was three shots better than Doc Redman and Sam Ryder, who finished in sole possession of third place.

Jay Haas, in teaming with his son Bill, became the oldest player in PGA Tour history to make a cut. The 68-year-old drained a 4.5-foot par putt on 18 on Friday to reach the weekend and break Sam Snead’s record that stood since 1979 when he made the cut at the St. Jude Championship at 67 years of age.

The Mexican Open becomes a part of the PGA Tour for the first time this coming week, as it will be held at the Greg Norman-designed Vidanta Vallarta. Jon Rahm is the highest-ranked golfer in the field, and Abraham Ancer leads a contingent of home-grown stars looking to win on Mexican soil.