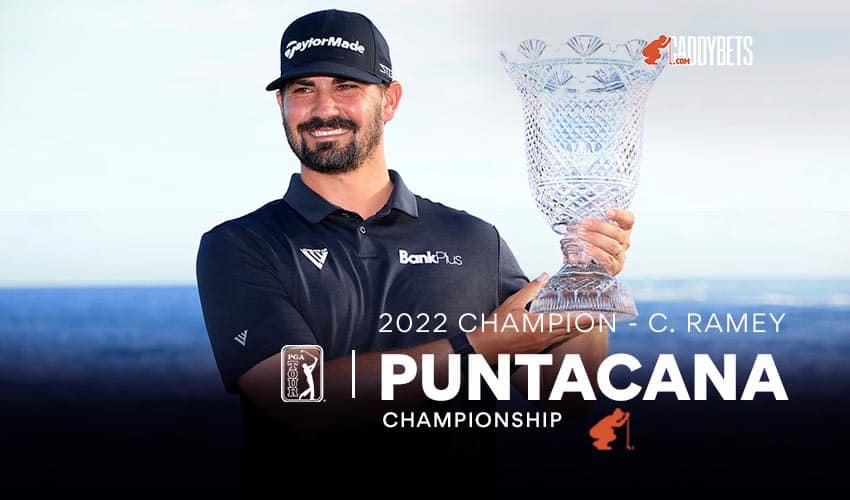 With the top stars of the PGA Tour playing the WGC-Dell Technologies Match Play event in Texas, it made for a golden opportunity for a golfer to pick up his first PGA Tour win at the 2022 Puntacana Championship at Corales Golf Club in Punta Cana, Dominican Republic.

And 29-year-old Chad Ramey did just that, taming the windy conditions by shooting a 5-under 67 to win the tournament by one stroke over Alex Smalley and Ben Martin.

Martin, who was leading the tournament going into the final round, missed a birdie putt on hole No. 18 that would’ve set up a potential playoff. After that miss, Ramey could safely two-putt for par to win the tournament, which he did.

“It was honestly like I always thought it would be,” Ramey said. “It was very stressful, very nerve-wracking coming down the stretch, but I just grinded it out, kind of stuck to my process, stayed within myself and pulled it out.”

Ramey started the day in second place and used a surge of four-straight birdies from holes 13-16 to take the lead. He parred the par-3 17th and then did so again on 18 for the victory. He scored 271 (-17) for the tournament.

“I’ve been rolling the putter good all day, they just hadn’t been going in,” Ramey said. “I was kind of all around the hole on the front side. I didn’t change a thing [for the birdie stretch on the back nine], I didn’t do anything different. They just started going in.”

With this being an alternate event on the PGA Tour due to the Match Play tournament taking place, Ramey pockets 300 FedEx Cup points instead of the usual winner’s share of 500. While he qualifies for the PGA Championship and earns the usual winner’s exemptions, the win does not qualify him for a berth in the Masters in two weeks.

Martin was going for his second-career win (2014 Shriners Children’s Open) in just his second start of the season.

Smalley, who jumped up from starting the day in ninth to tying for runner-up with Martin, shot a 65 on Sunday for the rookie’s best finish on the PGA Tour.

Jhonnatan Vegas, who was the betting favorite going into the tournament, finished tied for fourth with Cameron Percy at 15-under.

Rasmus Hojgaard of the DP World Tour was sixth at 14-under, and there was a four-way tie for seventh at 13-under among Adam Schenk, Brian Stuard, David Lipsky, and Martin Trainer. Hojgaard’s brother Nicolai, who won on the DP World Tour earlier this year, was the highest-ranked golfer in the field at No. 77 but didn’t end up making the cut.

Players from this event and the WGC-Match Play meet in San Antonio, Texas for the Valero Texas Open at TPC San Antonio. Jordan Spieth is the defending champion, and Rory McIlroy and Bryson DeChambeau are among the big names playing in this event, which is the final chance for a golfer to qualify for the Masters, which takes place the following week.

Join us to receive our daily Golf content, and make sure to stay tuned for 2022 Puntacana Championship updates, golf news, and PGA Tour schedule.