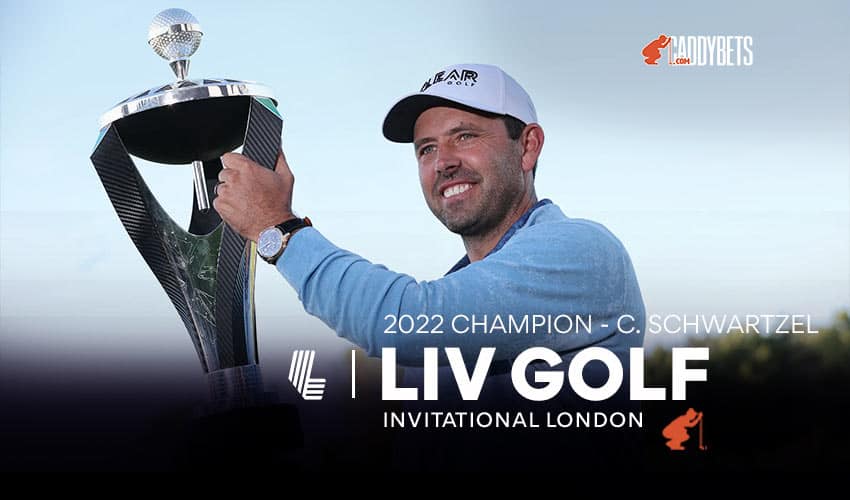 Just in case you hadn’t heard, the inaugural LIV Golf Invitational Series got underway this week at the Centurion Clun outside of London, England.

Forty-eight golfers competed for the most oversized purse ever bestowed upon professional golf, just around $25 million, which has intrigued some of the best golfers in the world to resign their PGA memberships, including Phil Mickelson and Dustin Johnson to compete in the Saudi-backed golf league.

After months of speculation and controversy, four dozen golfers split into 12 teams and teed off at the Centurion Club in St. Albans outside of London Thursday morning in a shotgun start. Golfers played 54 holes over the course of the last three days, competing for a total of $25 million in prize purses, $20 million in individual prizes, and the other $5 million split across the top three team finishes.

As the dust settled Saturday evening in England, former Masters winner Charl Schwartzel had the honor of having his name placed in history as the first winner of any LIV tournament.

Schwartzel took the lead partway through round 1 and never surrendered it, holding off a challenge from teammate and South African countryman Hennie Du Plessis during the final round on Saturday in London. Schwartzel ended the tournament at 7-under, with Du Plessis just behind him at 6-under. With the win, Schwartzel will claim the individual prize in excess of $4 million, but that’s not all! Schwartzel also led his team, Stingers GC, to the team title, which earned an additional $3 million and will be split amongst Schwartzel, Branden Grace, Louis Oosthuizen, and Hennie du Plessis. That’s not a bad take for three rounds of golf. For finishing second to Schwartzel, Hennie du Plessis will receive $2.1 million, and third-place finishers Brendan Grace and Peter Uihlein will receive $1.5 million.

Two-time major champion Dustin Johnson had his moments throughout the week but ultimately could not put it all together to make a charge to the top of the leader board. Johnson finished with a three-round total of 1 under and finished in a tie for eighth. Johnson will now turn his attention to this week’s U.S. Open at The Country Club.

One of the more controversial members of the newly formed LIV Golf Invitation Series, Phil Mickelson, fell off the pace with rounds of 75 and 76 after opening with a 1-under 69 to finish at 10-over and tied for 33rd. This was Mickelson’s first competitive outing since the Saudi International in February, so rust and certainly fatigue played a factor. However, Mickelson also has his sights set on this week’s U.S. Open He will need to get his game together if he hopes to compete in a much stronger overall field.

What’s next on the 2022 LIV Golf Invitational Series?

Expect the field to get better and better with every tournament, as it is rumored that the LIV, with its deep pockets, has enticed two more high-profile golfers in, Bryson DeChambeau and Patrick Reed, to jump from the PGA Tour and are set to tee off in the leagues’ second event in Portland. On top of that, it has been rumored that fan favorites Matthew Wolff and Rickie Fowler will be joining the LIV soon. With the possibility of huge payouts for wins on the LIV Golf Invitation Series, it might be too enticing for other pros to ignore. I mean, when Andy Ogletree can’t break 75, finishes last, but still walks away with $120,000, I expect others to follow.