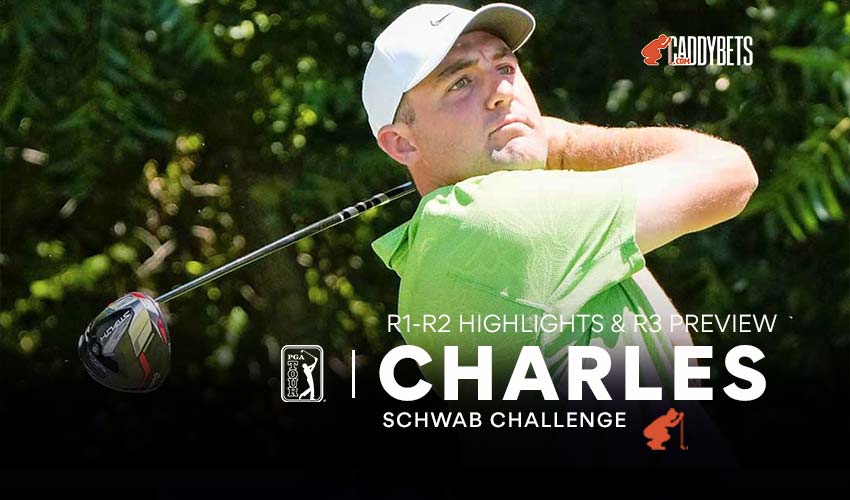 After two rounds of the 2022 Charles Schwab, the tournament is evenly poised as we head into an exciting weekend.

It’s a return to business as normal, as Texan native and current world number one Scottie Scheffler is one of three players tied at the top of the leaderboard on -9. Scheffler shares the lead with fellow Americans Beau Hossler and Scott Stallings.

With a lack of wind and the greens playing soft, this tournament is still wide open and those in and around the top of the leaderboard know that birdies are a must ahead of a crucial third round.

Worryingly for the rest of the field, Scheffler looks to have put his disappointing performance at last week’s US PGA Championship firmly behind him. Managing to back up his superb 66 in Round 1 with a splendid 65 in Round 2, Scheffler looks to be in complete control of his swing. The world number one is looking for his 5th victory in his last ten starts and is looking to record a rare Texas double following his win at the Dell Matchplay earlier in the season.

50 players are within nine shots off the lead and a streak of birdies will see players vault up the leaderboard.

Is another player looking to win in front of his home fans. Spieth Sitting just four strokes off the pace, he is another player who will feel he is nicely placed for a weekend charge.

Latest Golf Betting Odds ahead of Charles Schwab Round 3

With many players still in with a shout of winning this weekend, our friends at Jazz Sports have all of the latest odds ahead of Round 3.

It isn’t a surprise to see that Scheffler is the overwhelming favourite to lift another title. Priced at +165 to close the tournament out, it’s the most sensible and likely bet.

Scheffler is only tied for the lead and his two rivals Scott Stallings and Beau Hossler are priced at +900 and +1000 respectively. Whilst neither have the pedigree of Scheffler, they are class players in their own right. Both will relish the position they are in as well as the opportunity to take Scheffler down. If value is how you want to play, either Stallings or Hossler could be the way to bet.

Patrick Reed has had a rough couple of years with a combination of illness and bad form seeing Reed drop to 38 in the world. Reed’s last Tour win came back in 2020 and he will be looking to get back into the winner’s circle this weekend. Another Texan native, Reed starts just a stroke behind the leaders at -8 and could be a dark horse with odds of +750.

Jordan Spieth will be looking better last year’s result when he finished a narrow second to eventual winner Jason Kokrak. A four-stroke deficit is nothing to a player with his putting ability, and odds of +1200 could be another great value play.