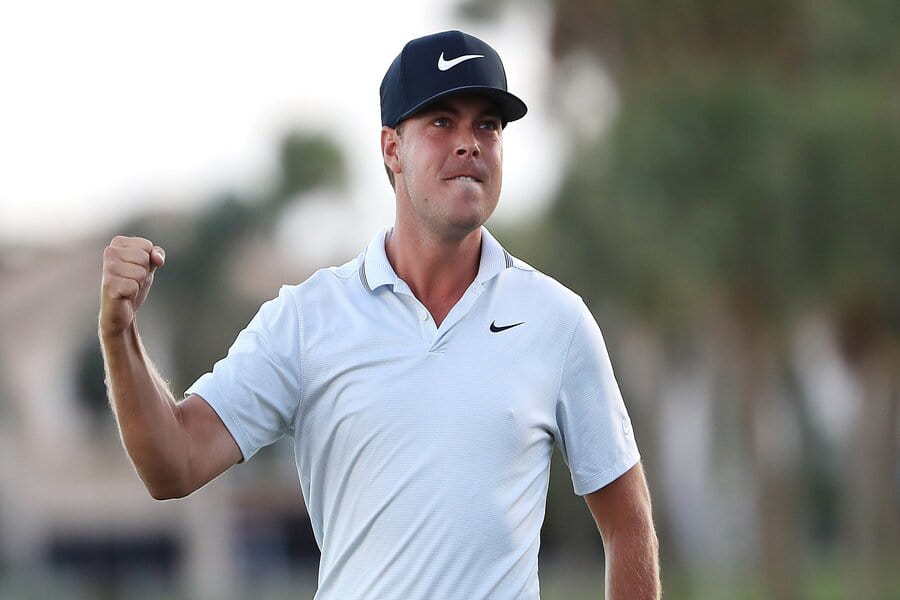 In case you miss it, no worries we bring you the CJ Cup Recap day 1 and day 2. The PGA Tour didn’t have to travel at all this week, as the tour stays in Las Vegas to battle it out for the CJ Cup at The Summit Club, which has never hosted a PGA Event before. This course is a bit of an unknown and has been described on PGATour.com as, “[It] isn’t a typical desert layout, and in fact, it will play more like a lush parkland course with a desert background that features strong bunkering and signature Tom Fazio green complexes.”

A week after Sungjae Im rolled to a victory at the Shriners Children’s Open at 24-under on a par-71; I would not be shocked to see this week’s winner at the CJ Cup better than that number, especially if the weather doesn’t play a factor in the proceedings.

The CJ Cup 2021, which limits the field to the top 60 in FedEx Cup rankings from the previous season, in addition to sponsor exemption, is loaded this year. Dustin Johnson, Justin Thomas, Collin Morikawa, Jordan Spieth, Xander Schauffele, Tony Finau, and Rory McIlroy make their first start since the Ryder Cup. The odds to win the whole tournament at the beginning of the week, as projected by Jazzsports.ag/* went Viktor Hovland at +900, but with a field this good, this could be anyone’s tournament to win.

So, with all that star power rested and fresh, which one of them jumped to the top of the loaded leader board at the end of play on Thursday at The Summit Club in Las Vegas? It was actually from an unlikely source, Robert Streb, who ended the day one stroke up on Keith Mitchell with an 11-under 61. Streb was on fire on the front, playing the first six holes at 7-under and shooting a 29, but he couldn’t quite carry that momentum onto the back nine, as he cooled a little bit but still finishing atop the leaderboard heading into play on Friday. Mitchell’s 62 was very consistent and finished with a birdie on the 18th to stay right on Streb’s heels.

The question will be, can Streb hold on? It’s tough to go wire-to-wire in any tournament, especially one with this many big names chasing him down. Streb was strong on the greens, which led to his impressive first day, but there are better overall ball-strikers behind him poised to shake the rust off after their first round.

Sitting right behind Streb and Mitchell in third after his opening round of 8-under is Harry Higgs. Higgs hit 16 of 18 greens in regulation, which gave him ten legitimate looks at birdie.

If he had dropped a few more putts, he could have easily been tied with Mitchell at 10-under.

Keith Mitchell, not Robert Streb, continued his strong play from Thursday into his round on Friday. After firing a career-low 62 on Thursday, Mitchell followed that with an 8-under 64 on Friday to build a five-shot lead heading into the weekend at The Summit Club. On the other hand, Streb could not match his play from Thursday, in which he shot a 61. Streb struggled on Friday and finished with a 72.

Mitchell was at 18-under 126, breaking his best 36-hole score on tour by five shots and catapulting him to the best odds to win it all, as projected by Jazzsports.ag/* at +200. Mitchell only had a few hiccups on the day, starting with the 10th hole when he was between clubs and had to scramble for par. That bit of indecision carried over to the tee on the par-3 11th, where his worst swing of the day led to his lone bogey; after that, Mitchell answered with three birdies to increase his lead for the day.

The biggest mover on the leaderboard came from the 28-year-old Texan Jordan Spieth. Spieth had eight birdies, and an eagle to counter a few soft bogeys for a 65 and finished tied for second along with Harry Higgs (67) and Seonghyeon Kim (63) five shots behind the leader. Spieth’s move on the leaderboard also led to his movement with the oddsmakers, as he jumped to +600 odds to win the whole tournament, as projected by Jazzsports.ag/*, right behind Mitchell at +200.

Spieth had a solid front nine, shooting a 31, but he started the second nine missing a 7-footer for par and then missed almost the exact same putt two holes later. Nevertheless, Spieth had eight birdies on the day and kept himself within striking distance heading into the weekend.

Sitting in that same group of 13-under is Adam Scott. Scott had two eagles on his last five holes and played his final seven holes in 8 under to finish Friday with a 63. Scott now sits at +1200 odds to win the whole tournament, as projected by Jazzsports.ag/*, giving him the third-best odds behind Mitchell and Spieth.

The shot of the day came from Abraham Ancer. Ancer had a double-eagle, or as we like to call it in the biz, an albatross. Ancer holed out from the fairway on the par-5 14th with a shot that rolled onto the green and broke some 30 feet to the left and right into the cup. Once finished the day 7-under and tied for 19th.

This was almost the tournament of the Albatross, as Dustin Johnson must have seen Ancer’s and decided to give it a try on the par-5 third. Johnson’s second shot banged into the middle of the pin and settled a few inches away. The world’s No. 2 player started with a 74, shot a 66, and actually lost ground. He was 14 shots behind

With two days of golf in the books at The Summit Club, we take a look at the odds from jazzsports.ag/* heading into play this weekend.

Join us at Jazz Sports and make sure to stay tuned for the 2021 CJ Cup Recap news.