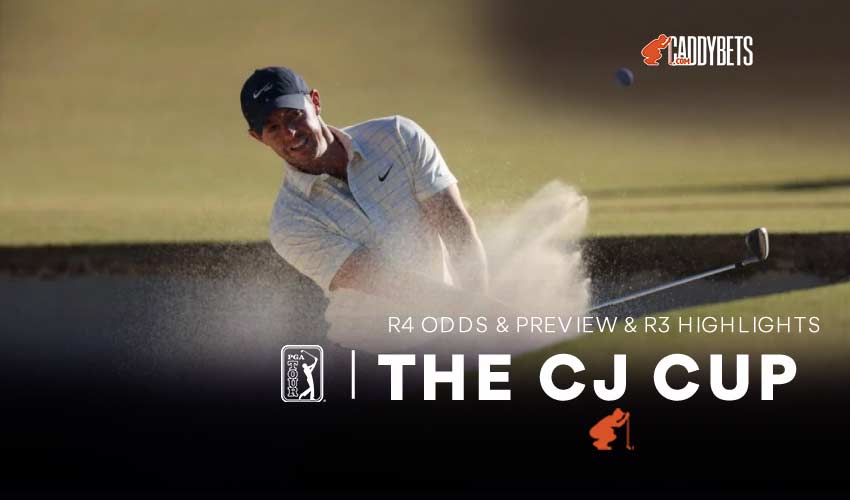 Rory McIlroy will head into today’s final round at this year’s CJ Cup holding a one-shot lead, here are the CJ Cup Round 4 Odds.

McIlroy is this week’s defending champion and knows that a repeat of his win last year will be enough for him to return to the top of the world rankings for the first time since 2020.

It was a frustrating day for the pair with both players only being able to pick up one shot on the day which will see them start today’s final round one stroke behind McIlroy.

KH Lee made the most of moving day and produced his best round of the tournament with an assured round of 66. Lee’s great play yesterday also sees him start the final day just one shot off the pace.

Aaron Wise had put himself in a position to potentially be in today’s final group but two bogeys on his back nine yesterday will see him start today three shots behind.

There are a host of huge stars who will still fancy their chances of victory despite sitting at least six shots off the lead.

Tom Kim is at -9 and four behind, whereas Sam Burns, Viktor Hovland, Shane Lowry, and Tommy Fleetwood all sit together on -7 and know something special could see them in the final shakeup.

Rory McIlroy will start today as the favorite and can be backed at a decent price of +120.

McIlroy has had a fantastic 2022 and he was desperately unlucky not to win a major last season. He bounced back from that disappointment by winning the FedEx Championship. Over the last six months, McIlroy has been in complete control of all facets of his game. If McIlroy can compete today as he has done over the first three rounds he will be the man to beat.

European Ryder Cup captain Luke Donald will be delighted that so many of his big names are assembled near the top of the leaderboard and he will be hoping Jon Rahm can rediscover his scoring touch from the first few rounds.

Rahm will start the day at +250 and just one off McIlroy’s lead. If McIlroy’s odds are deemed too short he could be the value play.

Despite the presence of several big names at the top of the leaderboard, Kurt Kitayama hasn’t succumbed to the pressure and still finds himself right in contention. Like Rahm, he will start proceedings just one shot off the pace, and odds of +900 could be the steal of the day.

Arguably the most interesting bet of the day could be backing the field. This bet would mean you would be covered on any player who is currently five shots back or worse.

Just looking at the list of players who will start the day further down the field there are some huge names all capable of shooting low. Your field bet would cover the likes of Sam Burns, Shane Lowry, Viktor Hovland, Tommy Fleetwood, and last week’s ZoZo Championship winner Keegan Bradley and could be a great play ahead of what could be a really competitive day of golf.

CJ Cup Round 4 Odds by JazzSports

Follow us on Social Media for more Cup Round 4 Odds & golf updates & check the Official World Golf Rankings, and more!